One of the church leaders identified in this report is currently serving the Archdiocese of Washington, Cardinal Donald Weurl. 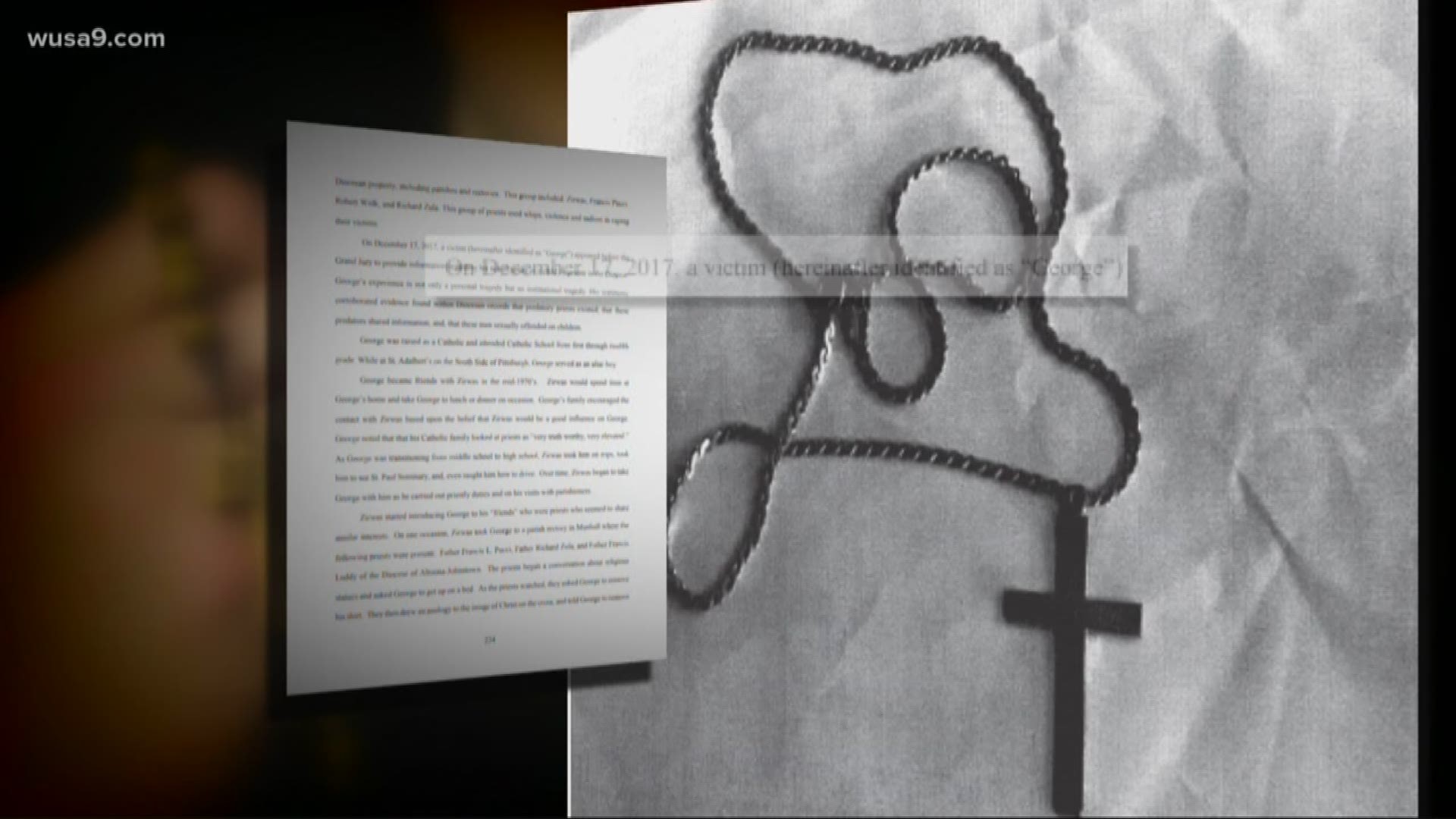 One of the church leaders identified in this report is currently serving the Archdiocese of Washington, Cardinal Donald Weurl.

Cardinal Wuerl interviewed with CBS News shortly before the report’s release on Tuesday.

In the interview the Catholic leader was asked, “Did you ever remove priests quietly to another…”

“That wasn’t - that wasn’t our process,” said the Cardinal, who believes the Grand Jury investigation will “vindicate the reforms he championed in 2002 to rid the Catholic Church of abusive priests.”

The Grand Jury wrote: “Wuerl’s statements had been meaningless without any action.”

Investigators accuse Wuerl of inaction in the case of Father Ernest Paone. Paone served as a priest during Wuerl’s time as a Bishop in the Diocese of Pittsburgh.

Before Wuerl arrived, Father Paone was almost arrested for Child Molestation in 1962. There was also mention of Paone and the illegal use of guns with young parishioners, according to the Grand Jury investigation.

The report says Paone was permitted to move to California and continued his ministry in two different cities, despite the knowledge that Paone was a “child molester.”

Then Cardinal Wuerl enters the picture.

In 1989, the Grand Jury says a then Bishop Donald Wuerl sent a letter to the Vatican about several diocesan priests recently accused of sexually abusing children. Their cases had reportedly “generated significant publicity.”

Bishop Wuerl defended the rights of parents to know whether accused priests had been reassigned to their parish. Investigators say this was part of the letter Wuerl wrote to the Vatican.

Still in 1991, the Grand Jury says Wuerl permitted Paone to be transferred again, this time to the Diocese of Reno, Las Vegas. The Grand Jury also says Wuerl knew Paone was working at a Catholic high school in Los Angeles.

Why is Weurl being held responsible here? The Grand Jury Report says, “Paone’s home Diocese remained the Diocese of Pittsburgh. The ability to remove Paone from ministry or permit him to continue in ministry resided in the Bishop of Pittsburgh.”

“The victim’s sister came forward and reported that after being aware of the abuse, her father ‘went to the rectory with a shotgun and told Father Paone that he had better leave town,” the Grand Jury report reads.

Investigators say it wasn’t until the Boston Globe’s scathing report on sex abuses cover-ups in Massachusetts that the Dioceses of Pittsburgh, under Bishop Wuerl’s direction, decided to place Paone on administrative leave. Wuerl accepted Paone’s resignation in 2003, about 41-years after Diocese learned Paone had sexually assaulted children.

Investigators say a politician also ignored criminal claims against Paone, in an effort to gain political support from the Catholic Church.

WUSA 9 is still looking into the 800+ page findings that use the words “secret archives” and “sophisticated” to detail the sexual abuse cover-ups carried-out within six different dioceses across the state of Pennsylvania.

The first mention of Bishop Wuerl's name comes on page 222.