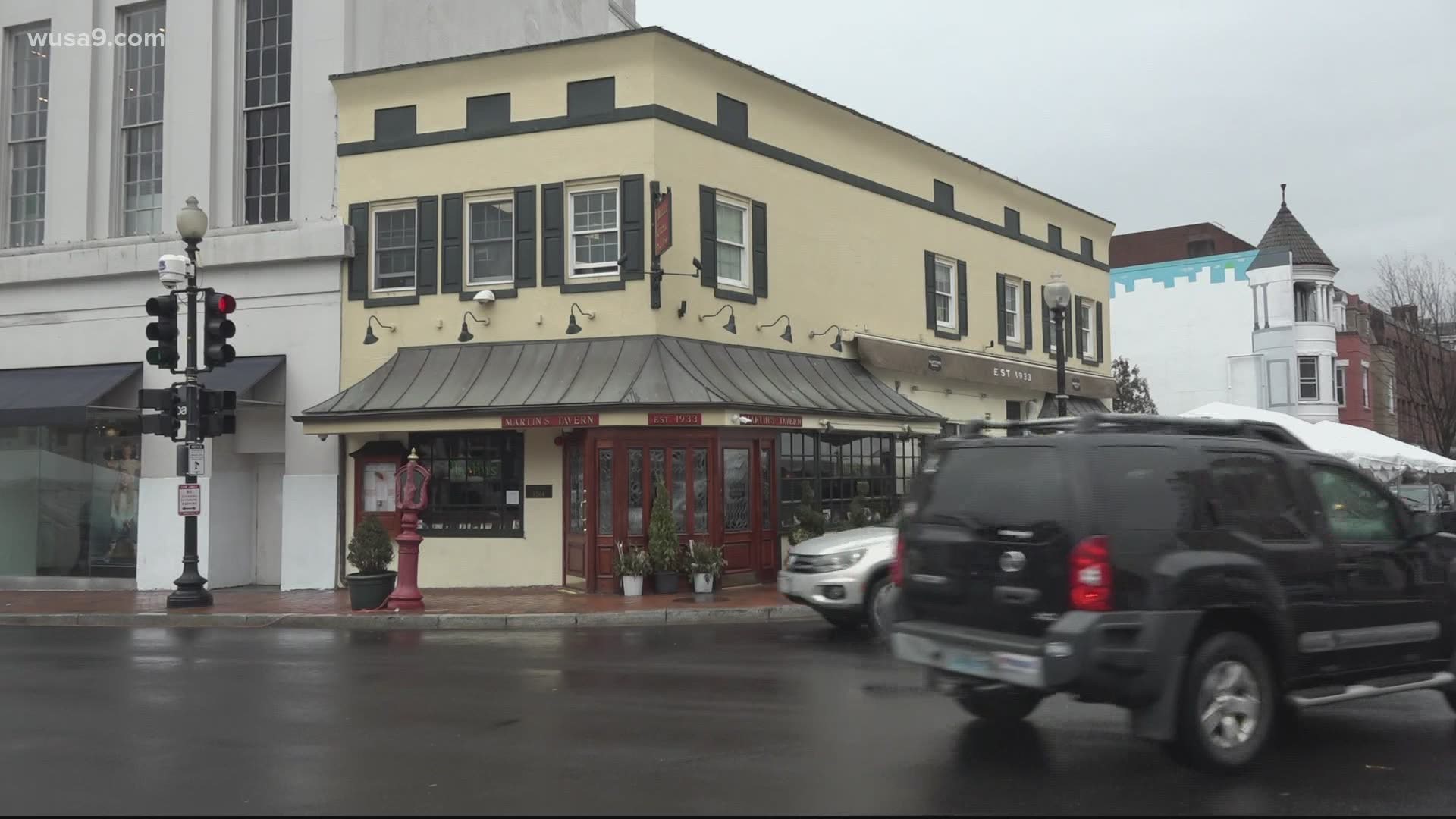 WASHINGTON — A D.C. woman claims a well-known Georgetown restaurant used its COVID-19 policy to discriminate against her.

Kristi Riggs, a black woman, said she visited Martin’s Tavern on Wisconsin Avenue, NW Friday evening. Riggs said upon arrival shortly after 5:15 p.m., the host told her they are asking diners to limit their meal to 1.5 hours. She was seated and served.

“Just before the one-hour mark, I see two older white women come to the door and talk to my server while pointing at my table,” Riggs said.

She said the server then approached her table and asked if she planned to leave shortly. Riggs indicated she had a friend arriving shortly to meet her for dessert and a cocktail. According to Riggs, that’s when the waiter gestured to his watch and said, “you’re only supposed to be here for an hour and a half.”

Riggs told the waiter she had only been seated at the table for an hour. She also asked nearby patrons if they were told about the time limit, and they replied no.

“So, then I was furious because it was becoming more clear to me that I was being singled out, and I was being targeted for my table,” Riggs said. “My friend arrives and asks for a menu and the waiter looks at me and says, ‘actually the manager is coming to see you,’ like I did something wrong and was being sent to the principal’s office!”

Riggs said the manager did not listen to her explanation, but rather told her party to leave the restaurant.  After some debate with the manager, Riggs asked for her check.

“He then said, 'don’t worry, we’ll take care of the bill, we just need you to leave,'" Riggs said. “I don't know if other people that have not been the victim of things like this understand how traumatic and how humiliating it is. On top of being angered and incensed, the humiliation of being told that I had to leave my table and exit a restaurant after doing nothing wrong!”

Riggs posted about her experience on her personal Facebook page and the post was shared more than 500 times.

“My name is Luis Valle and I’m the general manager of Martin’s Tavern. I am terribly sorry about what transpired Friday evening. I have talked to the manager on duty and the server separately and there was a miscommunication on both their parts. However, this does not excuse how it was perceived. Even though their intent was not to offend anyone, it does not change the fact that it did. We are an equal opportunity establishment and have no tolerance for harassment or discrimination of any kind to our guests and our staff. This is not a clear representation of Martin’s Tavern or the experience that we provide our guests on a daily basis.

We deeply regret that this situation occurred. The number one priority of Martin’s Tavern is the safety and well-being of all our guests and staff. I have addressed both the manager and server and they understand how this made you feel, and they express their sincere apology for what happened. Moreover, we are requiring that our staff attend a diversity and inclusion course. We are not going to allow that type of unintentional behavior. We strive to provide an excellent guest experience and we will do better.”

WUSA9’s Delia Gonçalves reached out to Martin’s Tavern and received this statement from owner William A. Martin, Jr:

“I apologize for the way Ms. Riggs was treated on Friday evening at my family’s restaurant, Martin’s Tavern, which has been operating in DC for nearly a century. Ms. Riggs should not have been made to feel she was not welcome. That is not how we treat our customers. No one should ever feel they were discriminated against. Unfortunately, I cannot apologize to Ms. Riggs in person right now, due to an emergency health issue requiring hospitalization. I will contact her as soon as I have been medically cleared.”