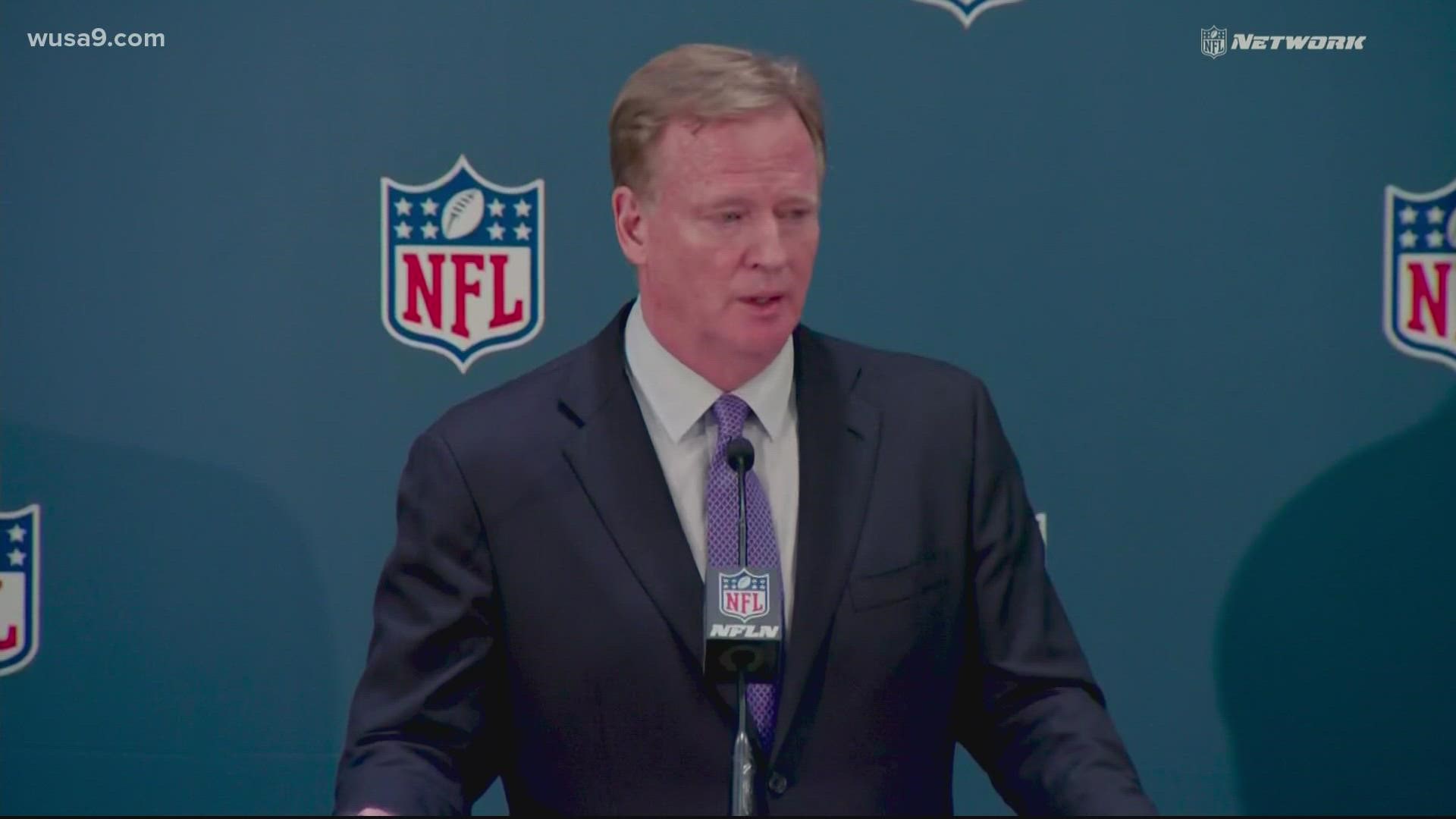 WASHINGTON — The clock is ticking for NFL Commissioner Roger Goodell as the league is facing a November 4 deadline to turn over details to Congress of its investigation into the Washington Football Team.

"We'll respond to Congress appropriately," said Goodell Tuesday night. "We'll be cooperative, we've been in touch and we'll certainly do that. We look forward to that opportunity to do that."

In 2020, the NFL began an extensive investigation into allegations of harassment and workplace hostility within the Washington football organization.

However, the NFL is not going to issue a report on its 10-month investigation because of its promise to protect the identities of those who testified, Commissioner Roger Goodell said Tuesday.

BREAKING: @CongressmanRaja tells me "I'm disturbed by what he said" after NFL Commissioner Roger Goodell pledged NOT to release the #WashingtonFootball investigation.
"I'm not really sure what it means to cooperate with us if he doesn't want to share what we've requested." pic.twitter.com/hgwPrecl44

Speaking around 7 p.m. after the first day of the NFL meetings for the 32 owners, Goodell said the league wanted to protect the roughly 150 former employees who spoke to outside counsel Beth Wilkinson, who conducted the NFL investigation.

The Chairs of the House Committee on Oversight and Reform and the Subcommittee on Economic and Consumer Policy have launched an investigation into the National Football League's handling of the Washington Football Team's "hostile workplace culture."

The NFL has until next Thursday to turn over documents and details to the House Oversight Committee. @CongressmanRaja tells me what happens if they do not comply.
More of my exclusive interview with Rep Krishnamoorthi on @wusa9 6pm. #WashingtonFootball pic.twitter.com/4NL05l9H1K

Goodell said the NFL did release a summary of the investigation and that Washington owner Daniel Snyder has not been allowed to handle any of the day-to-day operations of the franchise since July.

Here is a copy of the letter sent by @OversightDems to Rodger Goddell and the NFL regarding an investigation into the Washington Football Team. @wusa9 pic.twitter.com/cCRbo1Bn7k

Among the things requested by the Congress includes "all documents and communications obtained in connection with the investigation into WFT."

"I hope they do comply," said Rep. Krishnamoorthi. "We do have tools at our disposal to compel the production of documents as well as live testimony. I hope we don't have to resort to that."

On Tuesday, members of the NFL’s Social Justice Working Group and the owners were given a copy of a letter by two former employees of the Washington Football Team asking them to make a public a report.

“I'd love for this to be a learning point, not just for the NFL, but for leagues and teams all across that this shouldn’t be hidden,” said Ana Nunez, who worked in the team’s business department until 2019.

“There shouldn’t be -- no workplace is perfect which is understandable -- but there has to be a level of accountability when it comes to toxic culture and sexual harassment,” she said.

"We have to investigate three things," said Rep. Krishnamoorthi. "One: the workplace and the allegations of severe sexual harassment. Two: the way the NFL actually investigated this. The fact that they told the lead investigator not to write anything down is highly suspicious. And three: the use of these non-disclosure agreements to silence victims and perhaps to allow sexual predators to strike again is also deeply distressing."

Rep. Krishnamoorthi was non-committal when asked about the potential for a Congressional hearing -- regardless of whether the NFL complies with Congress' request for documents and information.

Delegate Eleanor Holmes Norton (D-DC) who also sits on the House Oversight and Reform Committee told WUSA9 last week she though a hearing would be "highly likely."

"Congress must get to the bottom of this," said Rep Krishnamoorthi. "The NFL enjoys a special privilege under our federal anti-trust laws. The bargain here is that the NFL has to act in the public interest, to some extent."

"Congress always has an interest in making sure that every workplace is safe in America," said Rep. Krishnamoorthi.