Blockbuster comes to Alexandria ... sort of

A movie fan in Alexandria has built "Blockbuster boxes" so others can watch free movies during the pandemic. 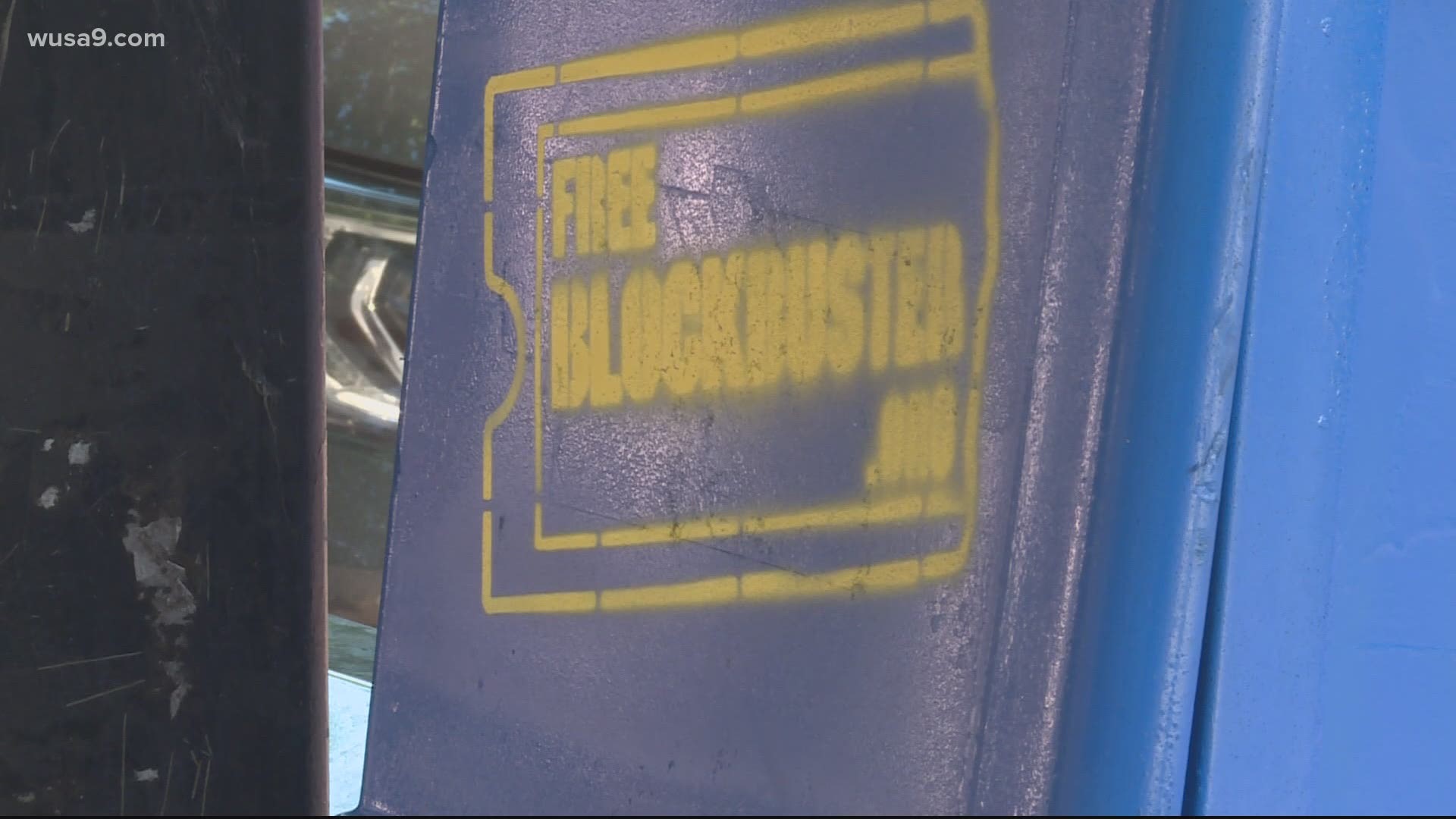 ALEXANDRIA, Va. — Anyone searching for a movie can now make it a "Blockbuster Night," thanks to one man who brought a community project believed to have started in California to the DMV.

As a self-proclaimed "movie nerd," Matt Scott repurposed old newspaper and pamphlet boxes by painting them blue and adorning them with the classic movie rental company's logo.

"I saw some folks that I know in Richmond who started doing the boxes down there. That’s sort of where I got the idea," said Scott, who believes the project originated in Los Angeles. "I think I put the first one out in the first week of June."

Now, the "Blockbuster boxes" can be found in Old Town, Del Ray, and Carlyle.

The idea behind them is simple: leave a movie, take a movie.

Anyone can donate to the cause and Scott hopes others join in on the fun.

"People seemed to get the concept pretty quickly. They were bringing old movies and dropping off stuff," he said. "I want people to know it’s a community project. I would love if people saw this and then reached out wanting to donate movies.”

HAD to find the guy who did this.

On Sunday, the Old Town box located outside Misha's Coffee on King Street had at least a dozen titles for people to choose from.

Scott told WUSA9 that he'll occasionally stop by the Blockbuster boxes to make sure they have ample supply.

"I’m a little protective of them. I go and maintain them and have some extra movies in case they run low," he said. "It’s crazy seeing some older folks having to explain to their young kids like what a Blockbuster is.”

Support for the community project has also spread online, with the original website for it all allowing others who want to build the boxes to print off logos to use.

An Instagram account that Scott runs also has over 200 followers and has pictures posted of the logo bringing back memories for many people.

"If you walk down the street and see that blue box with the logo on the side, immediately you’re just like, 'I haven’t see a Blockbuster in 10 years!'," he said. "It’s crazy seeing some older folks having to explain to their young kids what a Blockbuster is. When I was growing up, Blockbuster was wonderful.”

With the spread of coronavirus now forcing people to stay home, Scott said he wanted to spread some of the magic to the streets of Alexandria and make it easier for people to have fun for free.

"It just makes sense now. During the pandemic, people are looking for more things to do that don’t require spending money and going out as much," he said. "There’s no reason you shouldn’t be staying home right now. I hope this is just one more incentive.”

Aside from the one in Old Town, Scott's Blockbuster boxes can found outside the Dairy Godmother in Del Ray and near the 7-Eleven in Carlyle.

"You’re not going to get a late fee slapped on you like Blockbuster would have done back in the day," Smith added.