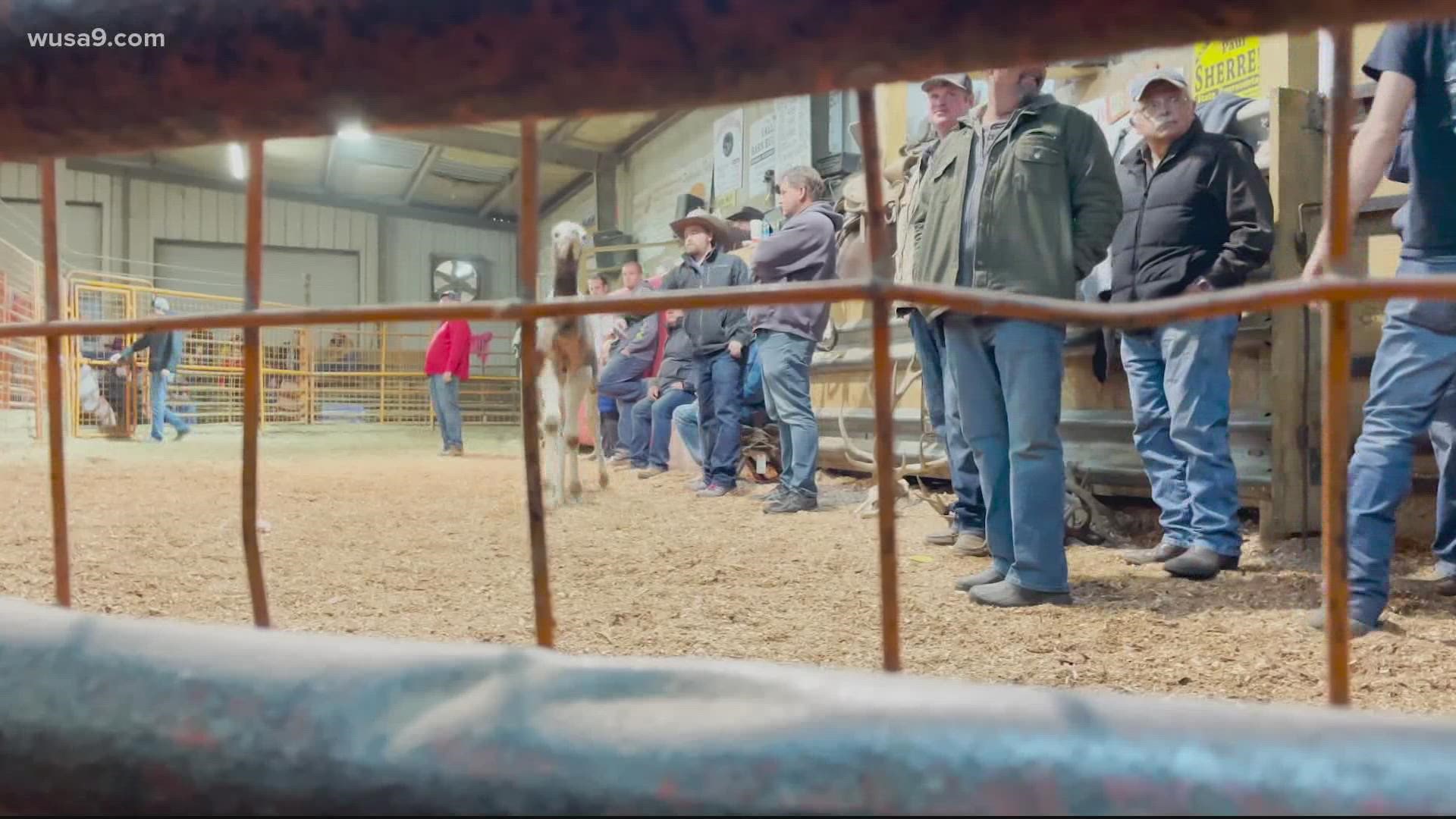 COOKEVILLE, Tenn. — WUSA9 is continuing to investigate the owner of several escaped zebras in Prince George’s County. The investigation has taken us from Upper Marlboro, Md. to a small town in Florida, where WUSA9 reported on Jerry Lee Holly’s long history of wildlife violations, including a criminal conviction.

Now, WUSA9 has tracked some of Holly’s zebras to Cookeville, Tennessee. Inside the Triple W Exotic Animal Auction at Wilson Horse and Mule Sale, some of Holly's animals -- and many others -- were being sold to the highest bidder.

While exotic animal sales are illegal in Maryland and D.C., and severely limited in Virginia, Tennessee is a hot spot for exotic animal auctions. People from all over the country come to places like the Triple W to stock their farms, petting zoos, and roadside attractions.

WUSA9 called Triple W asking for a tour of the place and an interview about how it’s run, but a manager declined. Instead, WUSA9 paid for tickets and using cell phones out in the open, captured what happened over the last six days.

The auction started on Monday with cattle, some of the more exotic longhorns. On Tuesday, the auctioneer identified cattle coming from Jerry Holly’s Florida ranch. One of Holly’s representatives sold several of the livestock.

Holly was cited over 240 times for wildlife violations over 17 years, according to Florida public records.

He currently faces three Maryland animal cruelty charges after the death of one of his zebras from an illegal snare trap. Another zebra was found dead and decaying on his farm, according to a state complaint. Holly declined to comment to WUSA9. Some of his zebras are still on the run in Prince George's County.

Meanwhile, in Tennessee on Wednesday afternoon, zebras began arriving, kept in pens. While the pens weren’t heated, they appeared clean and with enough room for the animals to move.

The next day, the zebras went on the auction block. A dozen of them were sold, two belonging to Jerry Holly, each selling for over $5,000 and $7,000.

"This is all because they're treated like commodities by the clientele of these exotic animal auctions, which are roadside zoos, circuses or traveling acts and canned hunting ranches. These are all very cruel industries where animals are denied their most basic welfare needs," added Metzler.

WUSA9's review of the past three years of U.S. Agriculture Department inspection records shows Triple W repeatedly violated the law by selling to people without proper wildlife licenses. Reports showed the auction site was also flagged for allowing large animals to be penned without cover during rainy weather, causing animals to sink in the mud.

“There is no set number of noncompliances that will start an investigation," a USDA spokesperson said when asked about repeated citations at the auction house.

"Animals are adaptable, but it's important that their needs are being met for what the species requires," Metzler said. "And oftentimes, roadside zoos and breeders and other facilities are operating on shoestring budgets, they're not interested in providing for welfare needs because they're interested in lining their pockets."

Credit: Becca Knier
Camels were the highest priced animal up for auction at Triple W in Cookeville, Tennessee

It's unclear where these zebras are going, including the two that Jerry Holly’s representative sold on Thursday. Bidders are identified only by number. According to the auctioneer, zebras are sold in pairs because they typically have a mate, whether it be a mother and child, or adult zebra and a friendly donkey.

Despite the auctioneer’s advice, bidders are under no obligation to keep pairs together. WUSA9 witnessed zebra pairs being separated multiple times throughout the auction, including Holly’s zebras, causing the auctioneer to warn that it could result in separated zebras physically harming themselves and even dying in transport.

These zebras face an unknown future, often away from the eyes of accredited wildlife experts and into the hands of business people wanting a profitable return on their sizable investment. Because of different laws around the country, it’s difficult to track if zebras are being protected.

Triple W management told us to leave the auction before we could approach Holly’s representative for comment.

The auction house gets a commission, typically 10% or more. The most expensive animal WUSA9 witnessed sold at auction was a camel for $9,100.

READ MORE: Below are copies of four USDA inspection reports of Wilson Horse and Mule Sale Inc. from May 2019, November 2019, February 2020 and September 2021.