MRAPs, sniper scopes and Humvees: DMV police have received millions in military equipment to use on civilian streets

WUSA9 investigation finds police in MD and VA have received $5 million in military equipment over the past three years, including night-vision sniper scopes, MRAPs. 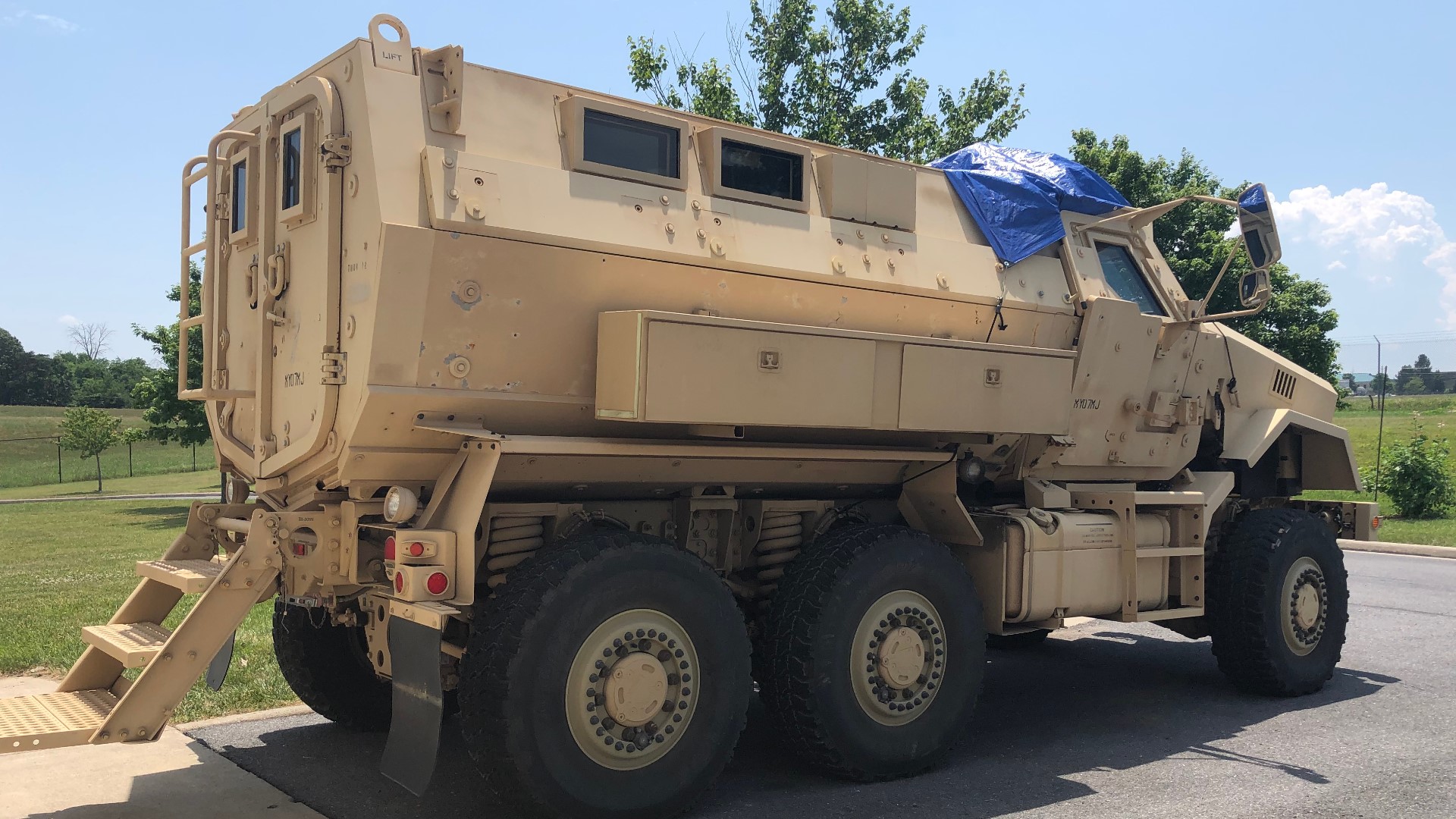 WASHINGTON — In Frederick County, Virginia, it's not unusual to see a mine resistant vehicle rolling down the road – nor Humvees or five-ton trucks, for that matter. But it's not the Department of Defense moving equipment; those armored vehicles belong to the sheriff.

“There are times when we do... it looks like the 7th Infantry coming down the road, but you know, we're there to help and to save somebody's life,” Frederick County Sheriff Lenny Millholland explained. “At the end of the day, that's all we want to do, is to make sure that if you call us, we have whatever it takes to either assist you, save you or rescue you.”

Sheriff Millholland said he's acquired some of what it takes to help the citizens in his county from the Department of Defense's 1033 program, which allows the military to get rid of equipment it doesn't need and police departments to get equipment they're looking for, but can't necessarily afford. Equipment received through the program is free for law enforcement agencies – they basically only have to pay for transport and maintenance.

“You have a budget,” Millholland said. “You have to try to stay within that budget. There are gifts that we would like to have, things that are not in our budget and things that would never been in our budget.”

Sometimes those DoD acquisitions are as harmless as a file cabinet. Other times, it's a mine resistant vehicle intended for use in Afghanistan or Iraq.

In the nearly three years since the Trump Administration re-upped the program, Millholland's office has received $786,629.32 worth of equipment – more than any other agency in the D.C. metro area.

WUSA9 asked Millholland why his department, which serves a suburban county with a population of less than 90,000 people, needs military equipment intended to be used on battlefields. The MRAP, or mine resistant ambush protected vehicle, he said, is used for search and rescue.

“It's high enough if we have to go off-road, we can do that,” Millholland said. “If it runs into trees, it's not like running one of the police cars into a tree.”

“It's a thermal imager and it can pick up on heat, so we can use that to locate somebody,” he said.

But mine resistant vehicles are, intrinsically, tools meant for warzones – tools that are now being utilized on the streets of dozens of cities in Maryland and Virginia.

In Frederick County, records show the sheriff's department used the MRAP 13 times last year while serving search warrants. In recent weeks, police departments across the country have used similar vehicles during protests in Seattle and Minneapolis.

We wanted to know if Frederick County Sheriff’s deputies would use the vehicle against protesters.

“I don't want to say we would use them against the protesters,” Millholland said. “But we would use them number one, to secure our personnel to get them into wherever we're going, and number two, in the event that somebody is injured, to get them out of there, because you could throw rocks and bottles at that thing all day long and it’s not going to get hurt. You can throw rocks and bottles at my police cars and you’ll break the windows and flip them upside down, tip them over.”

It's not just Frederick County that has this gear. We analyzed the data. In total, law enforcement in Maryland and Virginia received $5,187,509.93 worth of military equipment and vehicles. That total includes three MRAPS – only a fraction of the 24 mine resistant vehicles DMV police have received since 2013.

Montgomery County got its mine-resistant vehicle in 2014. A spokesperson told WUSA9 to submit a Public Information Act request in order to get more details on how it is used. We are waiting for that response.

The Spotsylvania Sheriff's Office said it got an MRAP after a 2013 standoff where high-powered rifle rounds were fired at officers. The department pointed WUSA9 to its policy on using the vehicle:

"SWAT Armored Rescue Vehicle (ARV) / MRAP: The MaxxPro MRAP is an       all-terrain marked armored personnel carrier equipped with emergency lights and sirens. The MaxxPro MRAP is a specialized vehicle that is available to respond to extremely dangerous situations. The vehicle is a modified Mine Resistant Ambush Protected (MRAP) vehicle, modified for civilian law enforcement use. The MaxxPro MRAP will act as an armored personnel carrier to assist in the safe deployment and retrieval of personnel and equipment in extreme environments. This vehicle shall not be utilized for routine patrol and the operators will not initiate traffic stops utilizing the vehicle. This vehicle will only be operated by personnel that have received specialized training in the operation and safe utilization of the MaxxPro MRAP. It shall not be used in normal patrol operations, crowd control, parades, static displays or other similar functions without prior approval of the Sheriff or his designee. ARV/MRAP usage must be approved by either Major or the Sheriff for any mission."

In Bladensburg, Maryland – a town of less than 10,000 people – the police department received 19 night-vision sniper scopes from the DoD in June 2018. Chief Tyrone Collington, Sr., who took over in January of this year, didn't know about them until WUSA9 asked. He said they've never been used, and now could see them being helpful to locate missing people. He added, however, they won't be mounted on any weapons.

Fredericksburg Police also got military night-vision goggles, but said they came damaged, so they haven't used them.

WUSA9 showed retired Maryland Police Major Neill Franklin our data on military acquisitions by DMV law enforcement agencies over the past three years. He said it indicates “we have a big problem.”

Franklin is now the executive director of the Law Enforcement Action Partnership, which focuses on police reform. They think legislation is needed to end or decrease the 1033 program and that communities need to put in FOIA requests or perform audits to know just what equipment their police departments have and how they're using it.

“They were designed for war,” he said. “Not the police protecting us within our communities.”

According to Franklin, the equipment sends the wrong message to citizens.

“Right off the bat, it says, 'I'm in conflict with you, I’m at war with you,’” he told us. “When this equipment comes onto the scene of a protest or a peaceful assembly of any type, we know right away that the tension will rise.”

Franklin gets the argument that vehicles like this help protect law enforcement, but the retired cop believes those situations are few and far between. He thinks there are other ways those situations should be handled, including a memorandum of understanding with a local National Guard unit or a central department that has one of these vehicles to share.

Millholland has a message to those, like Franklin, who don't think police need military equipment on civilian streets.

Data released by the DoD does not show any acquisitions from the 1033 program by D.C.'s Metropolitan Police Department. WUSA9 did reach out to MPD to see if it had ever used the program, but was told to make a formal records request. We are still waiting on a response to that request.