According to the National Bridge Inventory report by the US Department of Transportation, as of Dec. 31, 2020, 8 of DC's 243 bridges are rated as "poor." 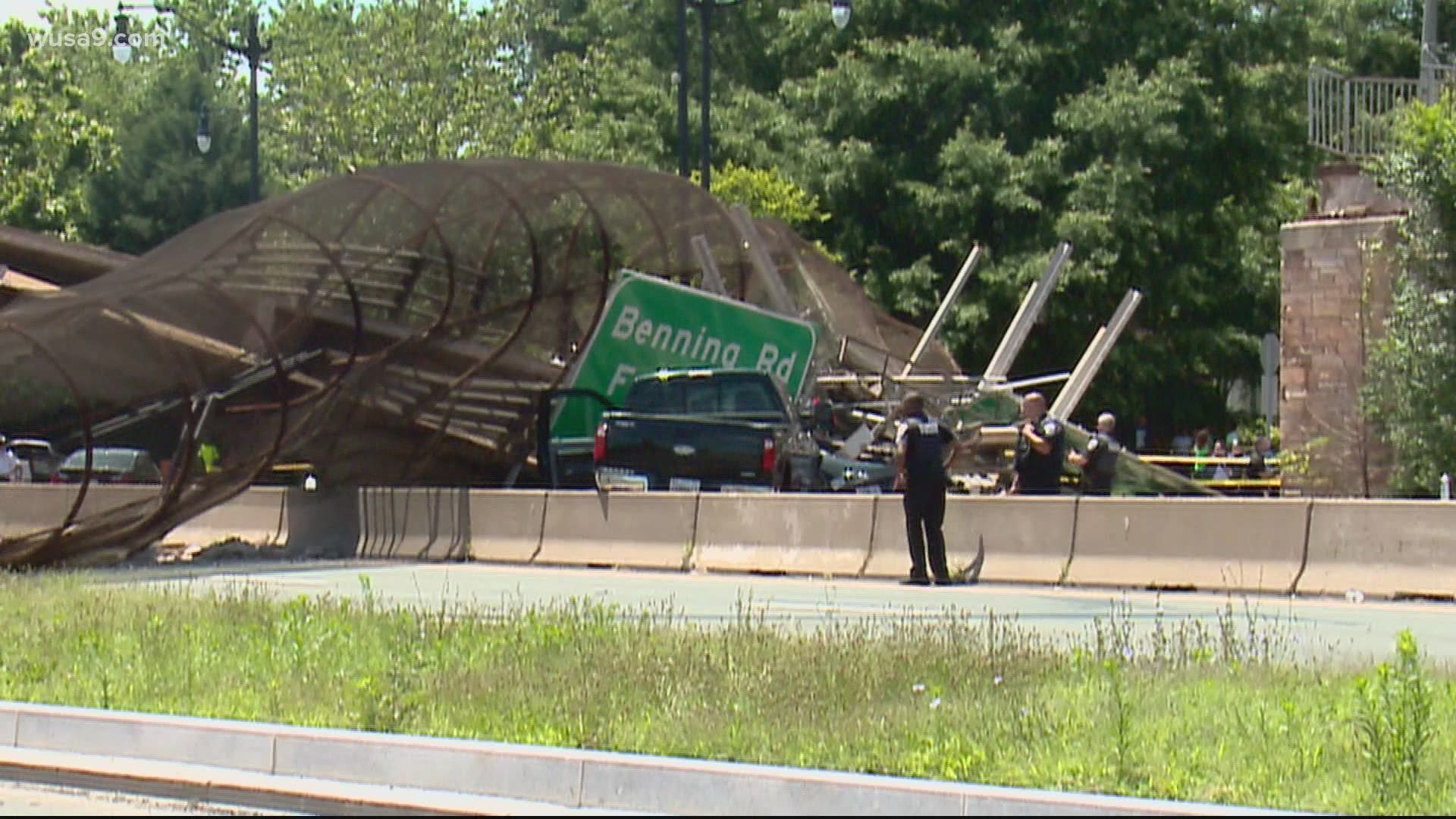 WASHINGTON — The pedestrian bridge that toppled after being struck by a truck on 295 Wednesday in Northeast, D.C. had been declared in "poor condition" – as an engineer said city officials should consider its eventual removal, according to the report from a February bridge inspection prepared for the District of Columbia.

"Due to continuing impact damage to the prestressed concrete t-beams, spalls and delaminations in the soffit, and deterioration of the walking surfaces and undersides of both pedestrian approach ramps, consideration should be given to replacing the bridge," the report said.

The bridge was given a "4" rating on the 9-point scale used to assess the condition of the nation's bridges, according to the report which included disturbing photos of crumbling concrete, rusting steel and a cracked deck.

Despite the deficiencies, the bridge was safe for continued use, according to District officials and an independent structural engineer who reviewed the documents for WUSA9.

"Based on what I read in this report, and the photographs I saw, I don't think it should be considered an unsafe bridge," said Allyn Kilsheimer of KCE Structural Engineers whose experience includes emergency recovery and restoration of the Pentagon after 9/11.

"I don't think it should be taken out of service. I think it needed to have either repair substantial repairs done or be replaced," Kilsheimer said.

Kilshiemer explained the deficiencies in the report, while substantial, did not indicate the core structure of the bridge was unstable.

BIG UPDATE: Earlier today @MayorBowser said there were no structural concerns about the pedestrian bridge, which was last inspected in Feb. Tonight, a different story— @SafeDC says that inspection actually led to a poor condition rating @wusa9 👇🏻

The impact from being hit by a truck was the cause of the collapse, according to DC Deputy Mayor for Public Safety Christopher Geldart.

Kilshiemer said because pedestrian bridges are lighter than those designed for vehicle traffic, it was not capable of withstanding the hit from the truck.

According to the National Bridge Inventory reported by the US Department of Transportation, as of Dec. 31, 2020, 8 of DC's 243 bridges are rated as "poor".

All of those bridges are in use and are in line for funding for repairs or replacement, according to Geldart.

In all, 3.3% of DC's bridges are in "structurally deficient" condition, according to the National Bridge Inventory.

The condition of DC's bridge inventory ranks ahead of 44 other US states and territories, the report found.