Shepherd's Table in Silver Spring is boxing meals to go and bringing them outside the shelter for the safety of volunteers and meal recipients. 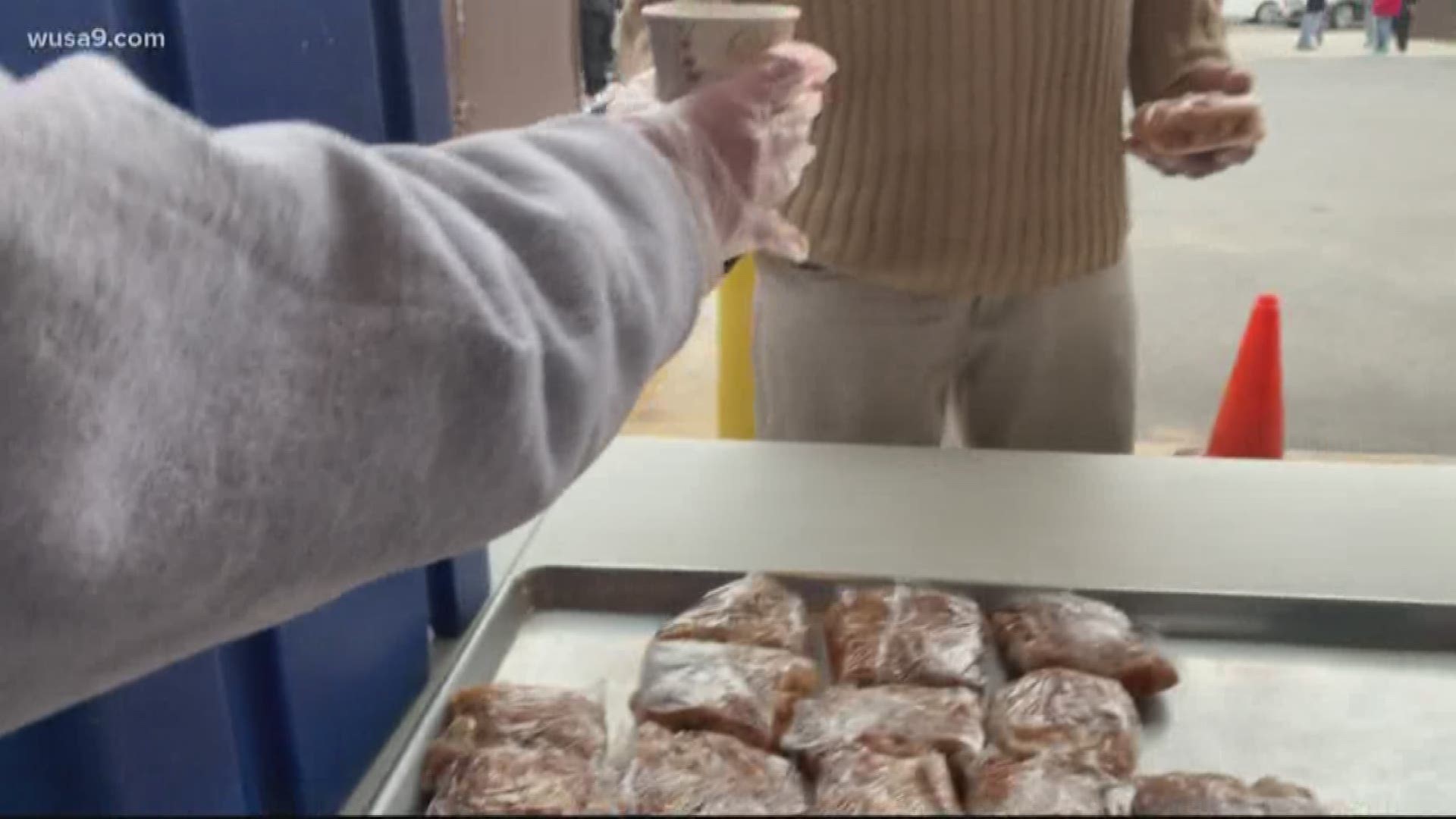 SILVER SPRING, Md. — The line to get a hot meal at Shepherd’s Table, a Montgomery County organization that feeds roughly 500 people a day, stretched down the sidewalk on Wednesday.

The organization said they're determined to ensure people who need a meal get one, even during the COVID-19 pandemic.

"We've never missed a meal in 37 years," Manny Hidalgo, the Executive Director of Shepherd’s Table, said. "The culture of the organization is one of just figure it out, like no matter how daunting the challenges we somehow seem to always figure it out and get people fed no matter what."

Shepherd's Table is figuring out their latest challenge by boxing up meals and taking them outside rather than having people come inside to get their food and eat.

"We started talking about what should we do differently because we knew that business as usual, we couldn't do," Hidalgo said. "We couldn't continue to serve the way we typically serve in this dining hall, because there would be more than 50 people in the space and because it would be jeopardizing not just the meal guests but our volunteers."

To work around this, they put up tents in the parking lot and take all of the boxed meals outside to serve. This allows them to abide by the state’s limit of 50 people in one space, as well as following social distancing guidelines.

"I could have the kind of staff that says, you know hey there's a global pandemic and I don't feel safe coming to work and I would honor that, but not one person on staff has said that they don't want to be here," Hidalgo said.

RELATED: Local food shelters stocking up for possible food disruptions as a result of coronavirus

According to Montgomery County’s latest food security plan, 7% of the county’s population is believed to be food insecure.

"I think it creates a heightened sense of anxiety that perhaps my meals will no longer be available," Hidalgo said. "I think the biggest problem has probably yet to be seen in that the unemployment rate is definitely going to rise so it's going to create even a greater level of food insecurity."

Credit: WUSA
The chef at Shepherd's Table said they would serve roughly 180 dinners on Wednesday evening.

He said despite the transition to a new normal, the amount of support from the community hasn’t stopped coming in.

"It really has been an all hands on deck, to make sure that the most vulnerable members of our community aren't adversely impacted by this pandemic," Hidalgo said. "And that's been beautiful to see."

Hidalgo said they need as many to-go boxes that they can get their hands on.

You can learn about how to get in contact with them here.

RELATED: This nonprofit is feeding students in need during coronavirus school shutdown