'After all the damage, now they want to sell?' | DC charter school leaving before it opens

WASHINGTON — You would think neighbors in the Fairlawn section of Southeast would be happy that Eagle Academy may be moving out of the community. But a group of homeowners feel like they've been duped by the school and its developers, who they say not only damaged their properties, but cut corners.

Back in May 2019, the DC Department of Consumer and Regulatory Affairs  called the project on the 2300 block of R Street, Southeast an "illegal construction site." DCRA issued a permit to do "plumbing work only" for a foundation on a two-story building October 18, 2017, followed by an "alteration and repair" permit in January 4, 2019.

But the school was only issued a building permit for a new 2 story structure on April 5, 2019 - one month prior to our May visit when this reporter observed construction on the two story building was nearly complete. That means for three months, crews were constructing the new building without the proper permit.

At the time, DCRA's then Acting Director Ernest Chrappah sent WUSA9 a statement in response to the violation saying: "“It is implausible a project of this scope could be near completion within such a short time frame.” 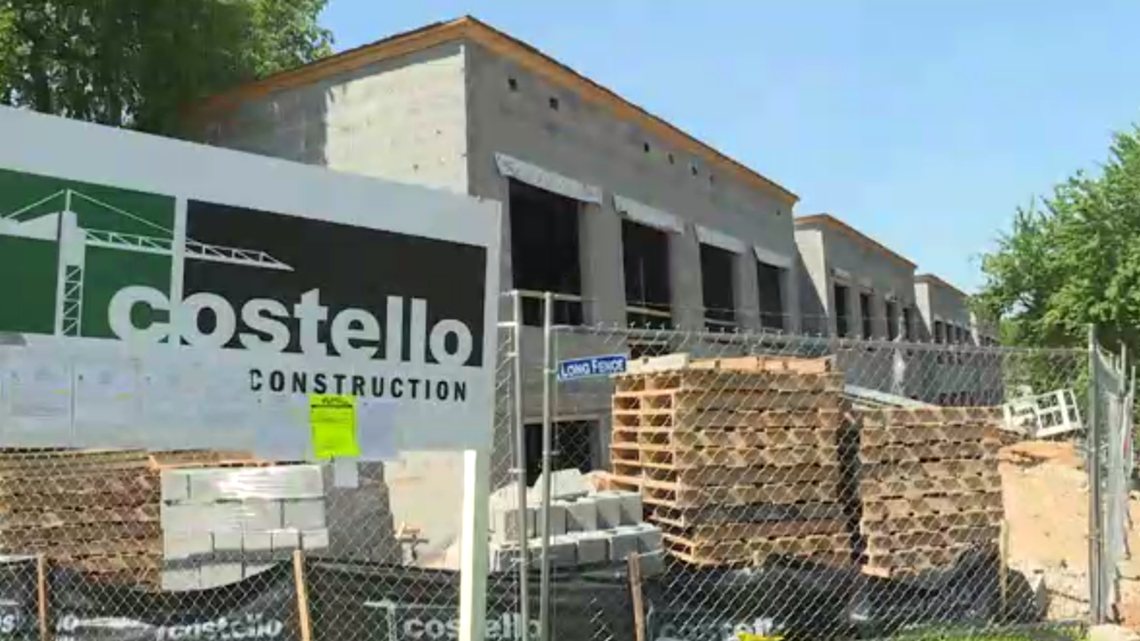 'They have totally disrupted our entire neighborhood' | SE DC residents upset after small renovation turns into two story charter school
WASHINGTON -- A neighborhood in Southeast Washington D.C. is upset because what started out as a small renovation project on a charter school has turned into a giant project and two story building. "They have totally disrupted our entire neighborhood," Crystal Patterson - who lives right next door to the project - said.

DCRA’s website lists four "stop work" orders in the past:  The first was issued October 20, 2017 for "illegal construction/working without a permit." The second is dated May 6, 2019 (following our reporting), the third was issued June 27, 2019 and finally July 23, 2019.  All four stop work orders were resolved and construction resumed.

"How does that happen?" vocal critic Tina Batchelor, who shares a driveway with the school, asked. "These things shouldn't be allowed to happen."

When this reporter spoke to representatives of Eagle Academy back in May, they said they were “fully compliant” with all building permits and regulations.  An Eagle spokesperson went on to say in a phone call they were "good neighbors" and transparent with the community by attending meetings and passing out flyers in the neighborhood.   The Eagle spokesperson said they planned to invite residents to the table, offer neighbors a chance to weigh in on landscaping and give them community space in the school.

But residents who spoke to WUSA9 said they were never clear the renovation project would end up being new construction just feet from their homes.

Last spring, about 30 homeowners signed a petition and sent it to various city agencies. They said no one responded. But their YouTube video documenting the drama caught this reporter's attention.

RELATED: DC developers get away with breaking the law | DCRA never collected $6 million in fines

Now that the building is complete (with its certificate of occupancy as the only outstanding issue with DCRA) and the sale is on the table, neighbors want the Mayor's attention.

"We need Mayor Bowser to step in and see what's happening here," Batchelor said, surrounded by a half a dozen of her neighbors. "We're not a forgotten people in southeast. We love the city, we appreciate our homes, we appreciate the work of city officials, but this has to stop."

Batchelor and her neighbors would like the city to buy the property and create a senior living facility or community resource center.

Eagle Academy released a statement saying, "We’re completing construction of the school building to ensure a school can open in the fall to serve the Fairlawn community. We continue to evaluate whether the location best serves our students, but are confident that the community will have a school. Eagle remains dedicated to providing students of all backgrounds with a premiere early childhood education and partnering with the local community. We are proud that both of our campuses were ranked Tier 1 schools by DC PSCB last fall and look forward to what we can accomplish in 2020."

The DC Public Charter School Board gave Eagle Academy permission to operate a school in Fairlawn prior to construction.  However, according to Tomeika Bowden a spokesperson with the PCSB, now that the school has submitted a request to amend its charter citing the intended sale of Fairlawn and acquisition of a new property in Southwest, the school will lose its ability to "educate children in that location (Fairlawn)."

During the summer of 2019, Eagle Academy advertised through lawn signs around the community and told this reporter back in May 2019 that the school was on track to open on time and enroll students for the 2019-2020 school year.

However, Eagle now cites its intention to sell in this excerpt from the proposal submitted to the PCSB December 9, 2019:  "The school also owns a property located at 2345 R Street SE in Ward 8, which Eagle Academy PCS plans to sell to another charter school in the coming months. Per the school’s amendment application, effective for SY 2020-21, Eagle Academy PCS will relocate its Ward 6 campus to a new location in the same ward, at 1900 Half Street SW. The school will also continue to operate its existing campus on Wheeler Road in Ward 8"

The PCSB will have a hearing February 24, 2020 to review and vote on Eagle’s amended charter proposal.  The public has until January 27, 2020 to comment by submitting a letter to the PCSB.