The Georgetown BID will help more than 28 restaurants add decks to enhance their streateries and space available on narrow sidewalks. 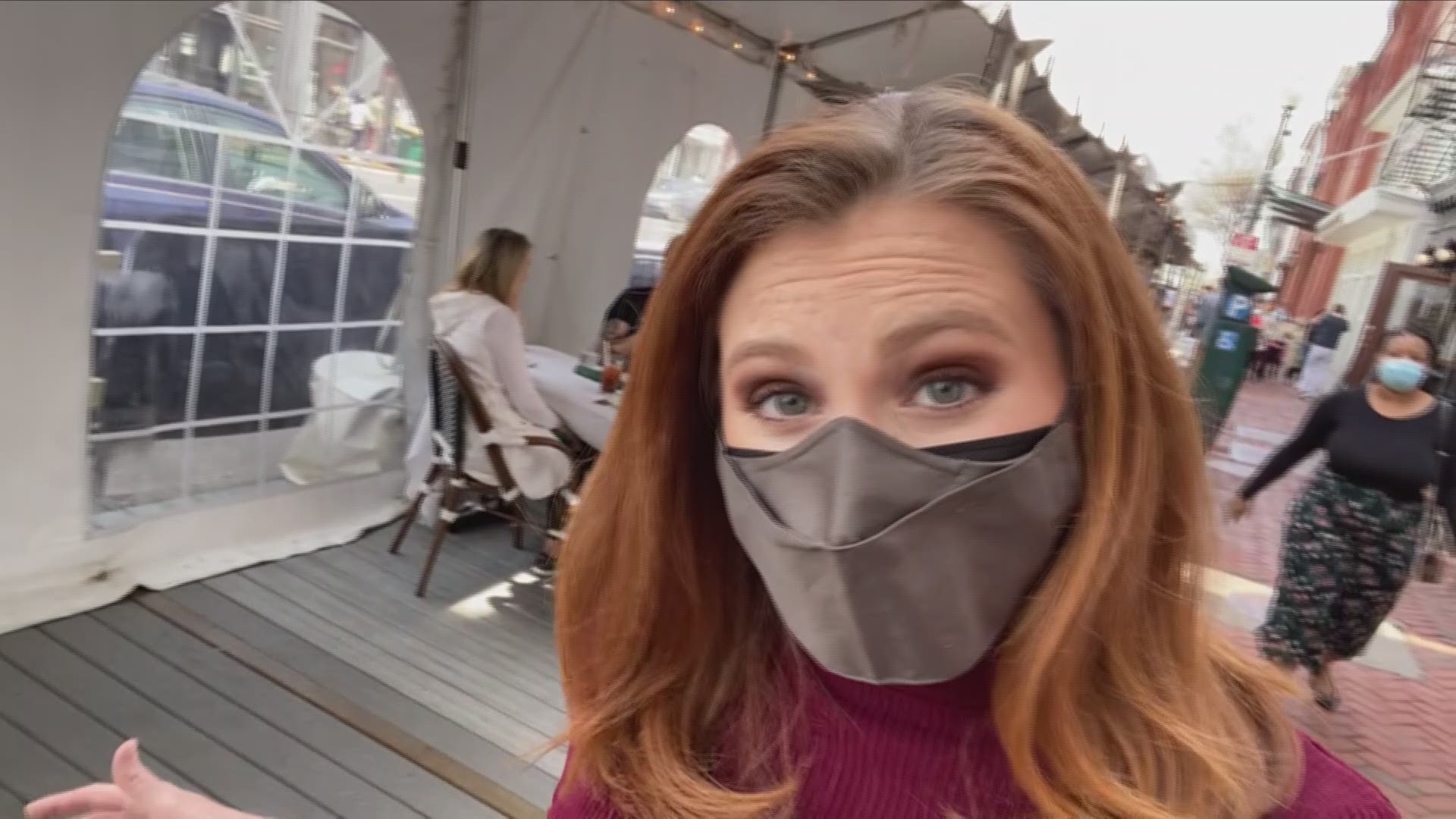 WASHINGTON — The Georgetown community is helping restaurants install decks as they work to enhance the streateries that popped up during the pandemic and increase sidewalk space.

The Georgetown Business Improvement District has already set up three pilot patios at Clyde's, Laduree and Thunder Burger, and L’Annexe.

“Probably my favorite thing to come with this whole thing (the pandemic) is that we got a patio outside,” Niko Smith, the manager of Thunder Burger and Bar on M Street, said.

Without it, Smith said their restaurant took a big hit at the start of the pandemic.

"At first, the biggest challenge was definitely just changing our business model," he said.

Before COVID-19, Smith said they were an indoor, sit-down, happy-hour oriented restaurant. After March 2020, he said they switched to takeout and then added a streatery with turf, essentially, on the road outside their restaurant.

“We're all kind of just, you know, trying to be quick on our feet here, you know?” he said.

Spent the day in Georgetown, checking out the decks @georgetowndc is helping 28+ restaurants install.

The BID says they enhance the streateries & create more sidewalk space for pedestrians.

The mgr. of @Thunderburger hopes they're here to stay.

That on @wusa9 at 7. pic.twitter.com/J7FBWlkeNo

In a release, the Georgetown BID said starting mid-April, it will be installing approximately 4,000 linear feet of removable sidewalk deck panels on M Street between 34th Street and 29th Street, and on Wisconsin Avenue between Q Street and the Canal.

The BID said the decking will extend the narrow sidewalks from an average of 9.5 feet to an average of 15 feet, using removable 4′ x 6.5′ panels. The release said the deck extensions, built with composite decking on top of a wood frame, are designed to be accessible to those using a wheelchair or pushing a stroller, to allow stormwater to flow under the deck to the curb, and to keep storm drains and fire hydrants clear.

To protect patrons dining on them, the BID said a combination of black metal barriers and concrete barriers will protect the sidewalk extensions.

“The idea of the sidewalk widening is actually to make Georgetown a better place than it was before COVID," the Director of Planning and Economic Development for Georgetown BID, Jamie Scott. "Now, instead of sitting in the street and feeling like you're sitting in traffic, it was sitting on a deck that feels like you're sitting on the sidewalk. It's a much more comfortable experience. And there's more space for pedestrians to walk.”

One caveat to the additional patio space for the more than 28 restaurants is the loss of approximately 200 parking spaces.

“I think...people would rather be in a place that feels like it's comfortable to walk around that's vibrant, that has energy than to say, what a great place. I can park very easily," Scott said.

He said some parking garages are offering discount rates to accommodate the parking reduction, and other restaurants are validating parking in garages, too.

Scott said the permit extends through the end of 2021 for now, but he and Smith hope to see the decks become more of a permanent fixture -- not only for restaurants. Scott said they hope to get the green light from the city for retailers to sell merchandise on decks in the future.

"If the project is successful and the community wishes to keep the extensions in place beyond 2021, the BID will go through another permitting process to keep them up longer," the BID's release said.

When it comes to the future of restaurants, post-pandemic, Smith believes some changes will be here to stay...like keeping more distance between diners.

“I think people are just gonna be a little less comfortable sitting as elbow to elbow as we were before," he said.