Creepy, crawly urban legends that lurk in the DC area

WASHINGTON (WUSA9) — They're everywhere. All around us.

Whether these stories are told for entertainment purposes or hold a darker truth about our towns' pasts, you couldn't avoid hearing these tales told around campfires or at childhood sleepovers.

In honor of Halloween, we decided to look a little deeper into the urban legends that surround the D.C. area.

If you're from Prince George's County in Maryland, then you've probably heard of the legendary Goatman. The tale goes something like this: Lurking in the woods in the area surrounding Bowie, Md., a half-human creature with the head of a goat and the body of man torments lovers, teens and dogs with an ax. In some versions of the tale, Goatman is said to have been the product of an experiment at the Beltsville Research Agricultural Center that went horribly wrong.

News reports about Goatman surfaced in the '70s after an article appeared with the headline "Residents Fear Goatman Lives: Dog Found Decapitated in Old Bowie." Teens and young adults are said to still go "Goatman hunting." A common sighting of Goatman has been reported on a bridge, known to locals as "Crybaby Bridge." 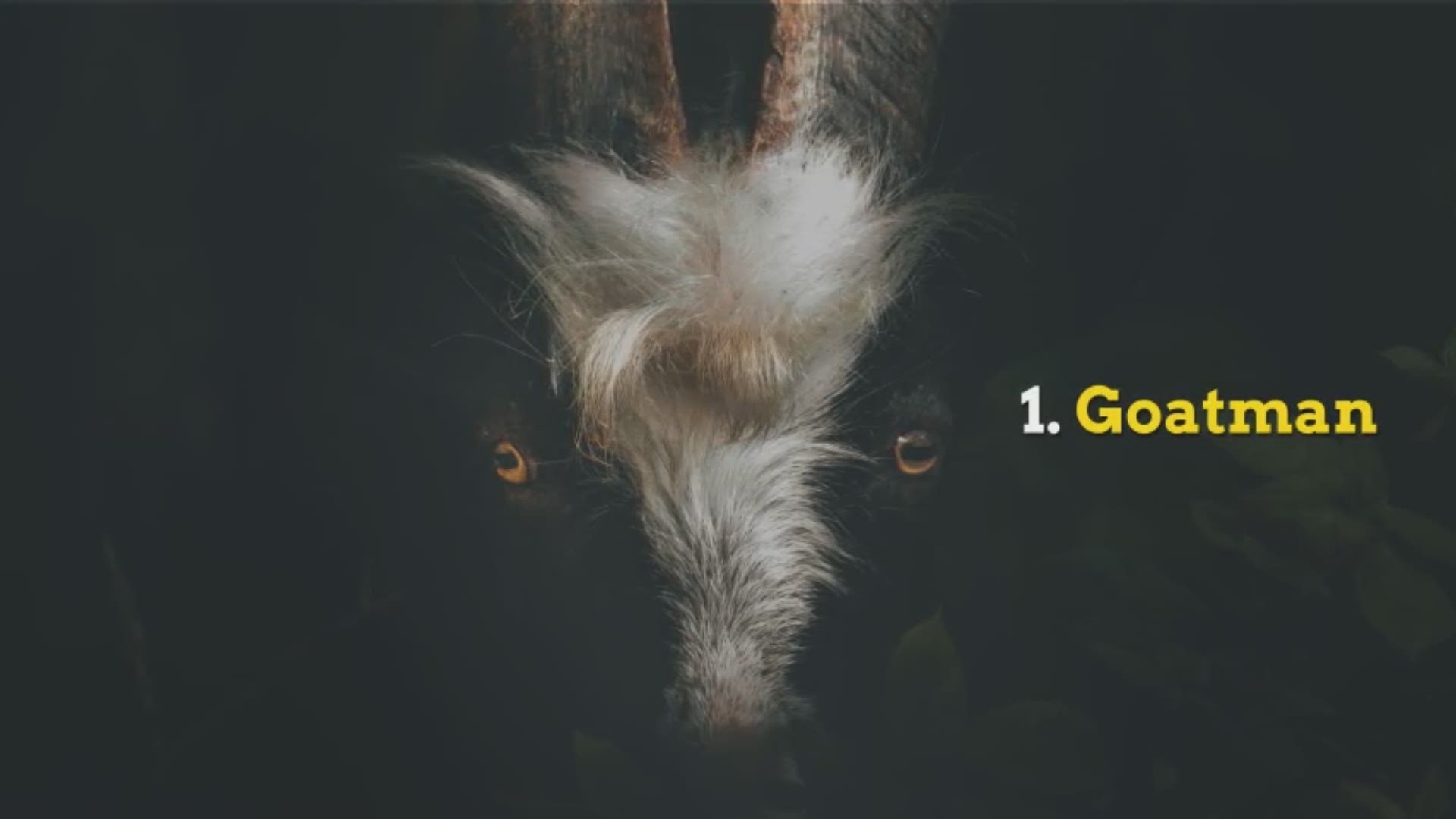 Imagine driving at the darkest part of night, where you don't even have light from the stars. You start to drive over a bridge when suddenly, your car stalls and you start hearing the cry of a baby. Afraid and a bit curious, you get out of the car to see where the sound is coming from. You look over the side of the bridge and see a figure that looks like an infant floating face-down in the water. Or something to that variation.

Like most urban legends, there are different stories told about Crybaby Bridge. In fact, there are several different bridges in the state of Maryland that have been given that nickname. In Bowie, Md., off of Beaver Dam Road near the Beltsville Research Agricultural Center, a bridge has become known as Crybaby Bridge. It is also said to be a place where the Goatman has been sighted most.

Some stories claim that a woman and her baby were murdered on the bridge. Another story claims that a young woman became pregnant out of wedlock and in order to avoid judgment, she drowned her baby in the river.

The real name of the bridge is Governor's Bridge, which is a single lane bridge that connects Prince George's and Anne Arundel counties. The bridge is currently closed and will not reopen until the summer of 2019.

Navigate the map by clicking the arrow right to see the urban legends in the D.C. area. If you're viewing this in our app, click here to view the map.

It wouldn't be an urban legend's list without Chessie, the sea monster that's said to swim in the depths of the Chesapeake Bay. Like its possible distant Scottish cousin, The Loch Ness Monster, countless sightings of Chessie have been reported by locals. Like Nessie, Chessie resembles a snake-like sea monster. And also like Nessie, Chessie's existence has not been verified.

In Whaleyville, Md., there's a haunting tree with twisted branches, known to locals as the Witch's Tree. The legend says that women who were thought to be witches were hanged from the tree. Many have claimed to hear crying near the tree and a woman screaming. Locals have reported mysterious orbs by the tree. The tree is a gnarled cypress tree, which consists of twisted branches. You can use that logical explanation for the tree's eerie appearance, if that will help you sleep better at night.

Now, this is an old one. It dates back to the 1700s. Think of this one as an ancient boogeyman. The Snallygaster is a common local legend in Frederick County, Md. The creature is said to be half bird and half reptile that swoops down and snatches up small livestock and children. The story is told to children when they're misbehaving. Kind of like, "you better behave or the Snallygaster will get you."

6. The Curse of Moll Dyer

In the 1700s, on a cold winter's night, Moll Dyer was driven out of Leonardtown, Md. The locals accused her of being a witch. Her body was later found frozen to a rock. Today, locals believe Moll Dyer still haunts the land and even claim that crops won't grow in the area. The rock in which Moll Dyer died on now rests in front of the court house in Leonardtown.

In the 1700s in Port Tabacoo in Charles County, Md., a soldier bragged about his gold and deed to an estate after a long night of drinking. Once the solider left a tavern with his Blue Tick Hound, he was attacked by patrons in the tavern on Rose Hill Road. The attackers intended to steal his gold and his deed to the estate. Both the soldier and his dog were killed. The gold and deed were buried under a tree nearby. Legend says that when the man who attacked the solider came to retrieve the gold and the deed, he was scared off by the ghost of the dog. The man then became ill and suddenly died. To this day, locals believe Blue Dog continues to watch over his master's gold. 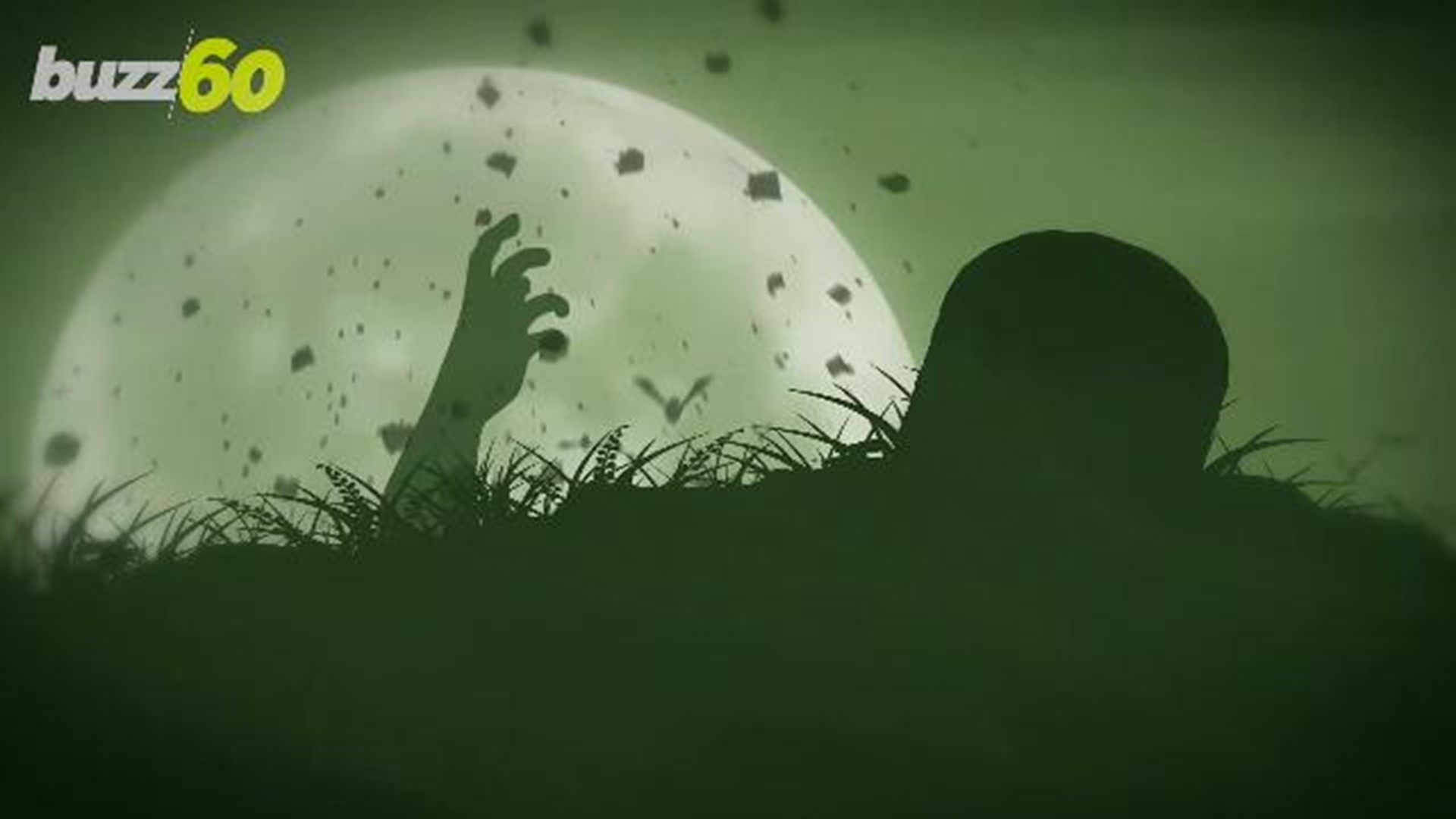 A man dressed in a bunny suit wielding an ax may not sound as creepy as other urban legends. The scariest thing about this tale is there is some truth to it.

The legend of the Bunny Man in Fairfax County, Va. begins at an insane asylum deep in the Clifton, Va. woods. For some reason, that's not relevant to the creepiness of this tale, the asylum closed and the patients were to be moved to the Lorton Prison. During the transport, the bus full of patients crashed and the patients escaped. All of the patients were captured, except for one, Douglas Grifon. During the search, police discovered a trail of skinned, half-eaten rabbits hanging from a bridge. Despite police efforts, Grifon was never found. On Halloween night, several teens were attacked while they were hanging out under the bridge. Police found them the same way they found the rabbits, gutted and hanging from the bridge. Legend has it that if you're at Bunny Man Bridge at midnight on Halloween, you'll meet the same fate.

Pretty creepy, right? The thing we like most about this urban legend is how elaborate and detailed it is. In case you didn't notice, the above tale mentions nothing about a man dressed in a bunny suit wielding an ax. Now, to the truth.

In the 1970s, the Washington Post reported that a man and his fiance were sitting in their car around midnight near the man's uncle's house. Suddenly, they saw a man dressed in a bunny-looking suit. The man yelled at the couple that they were on private property and then he threw a hatchet through the car's window.

Weeks later, a private security guard saw a man-beast holding an ax on the porch of an unoccupied house. Once the security guard approached the man, he started chopping at the porch using the ax. The man reportedly told the security officer, "All you people trespass around here. If you don’t get out of here, I’m going to bust you on the head."

Research has shown police reports from Fairfax County Police that report similar sightings. The couple has even been tracked down and after all these years, they still confirm the story.

The urban legend is still popular in the Fairfax County area. Younger Halloween adventurers like to go to the bridge on All Hallow's Eve, which the residents in the area are said to hate.

In April 2018, a man was found dead about 900 feet from the bridge. The man's death was not related to the urban legend, but police did say "and certainly it’s ironic it popped up near the Bunny Man Bridge." 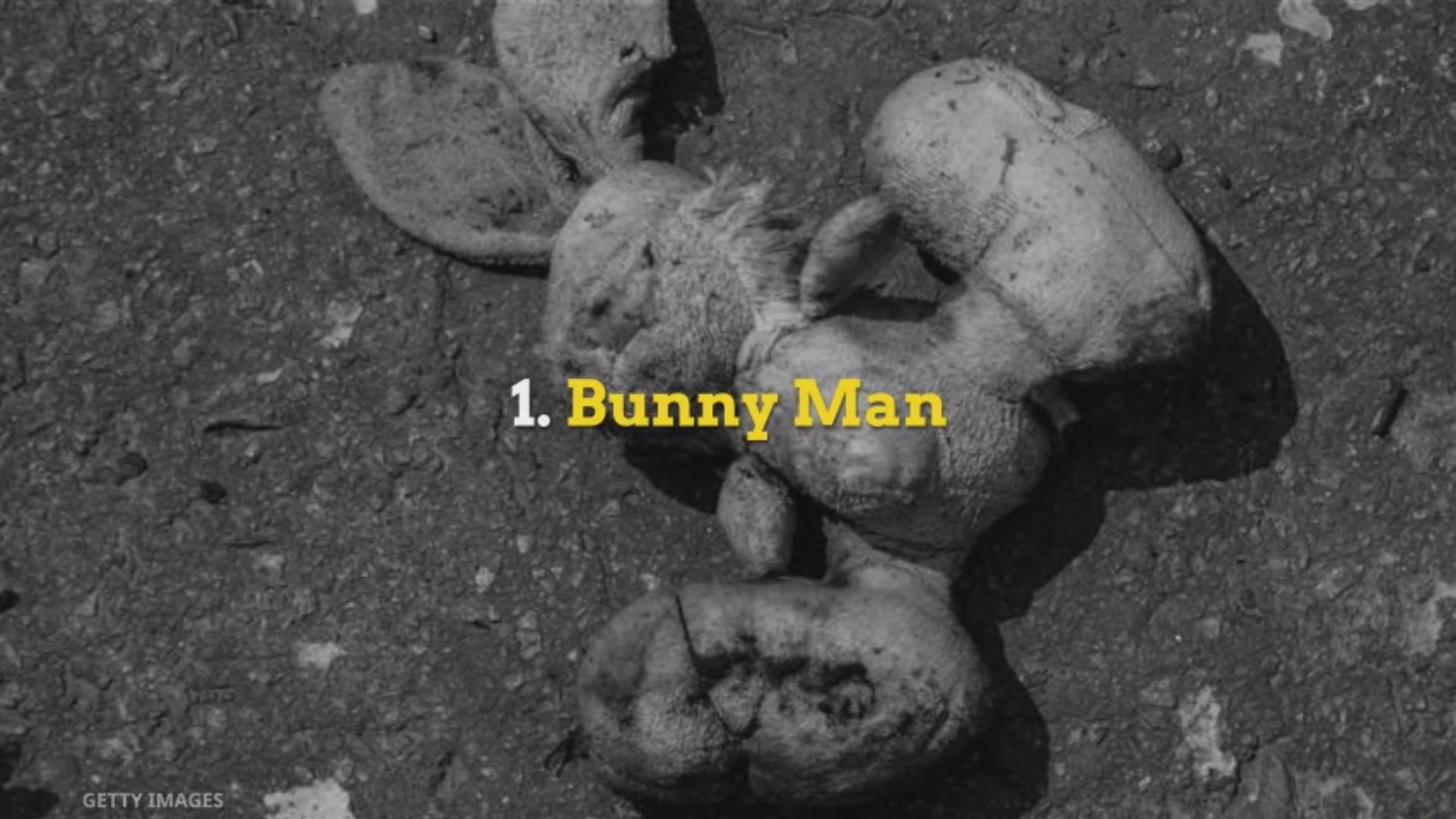 Jenni from Facebook told us about the following legends in Virginia:

Occoquan in is now a restaurant and tavern in Occoquan, Va.. Legend says a Dogue Indian had a thing for the owner's wife. The jealous husband shot him on the stairs in the tavern. People claim to has seen the man, described as a tall man with long black hair and dignified face, in the smoke of the fire and in a large mirror upstairs. When startled viewers turn around, he disappears.

WATCH: Top Haunted Houses to Visit Without Breaking the Bank

1. Curse of the Hope Diamond

The famous Hope Diamond now sits cozily in a case at the National Museum of Natural History. It's probably for best, considering everyone who has ever owned or worn the diamond has met a fate of misfortune and tragedy. With the exception of Harry Winston.

Here are some of the most bizarre tragedies associated with the Hope Diamond:

The Three Sister Islands sit in the middle of the Potomac River, just north of the Key Bridge. The story behind the Three Sisters tells a legend of three sisters who try to cross the Potomac River to save their brothers who were kidnapped by another tribe. The sisters drowned and turned into rocky islands. Other legends tell the story of three nuns.

Locals believe the sisters cursed the spot by not allowing anyone to cross the river. People claim to hear a strange moaning noise when the curse is about to take another life. 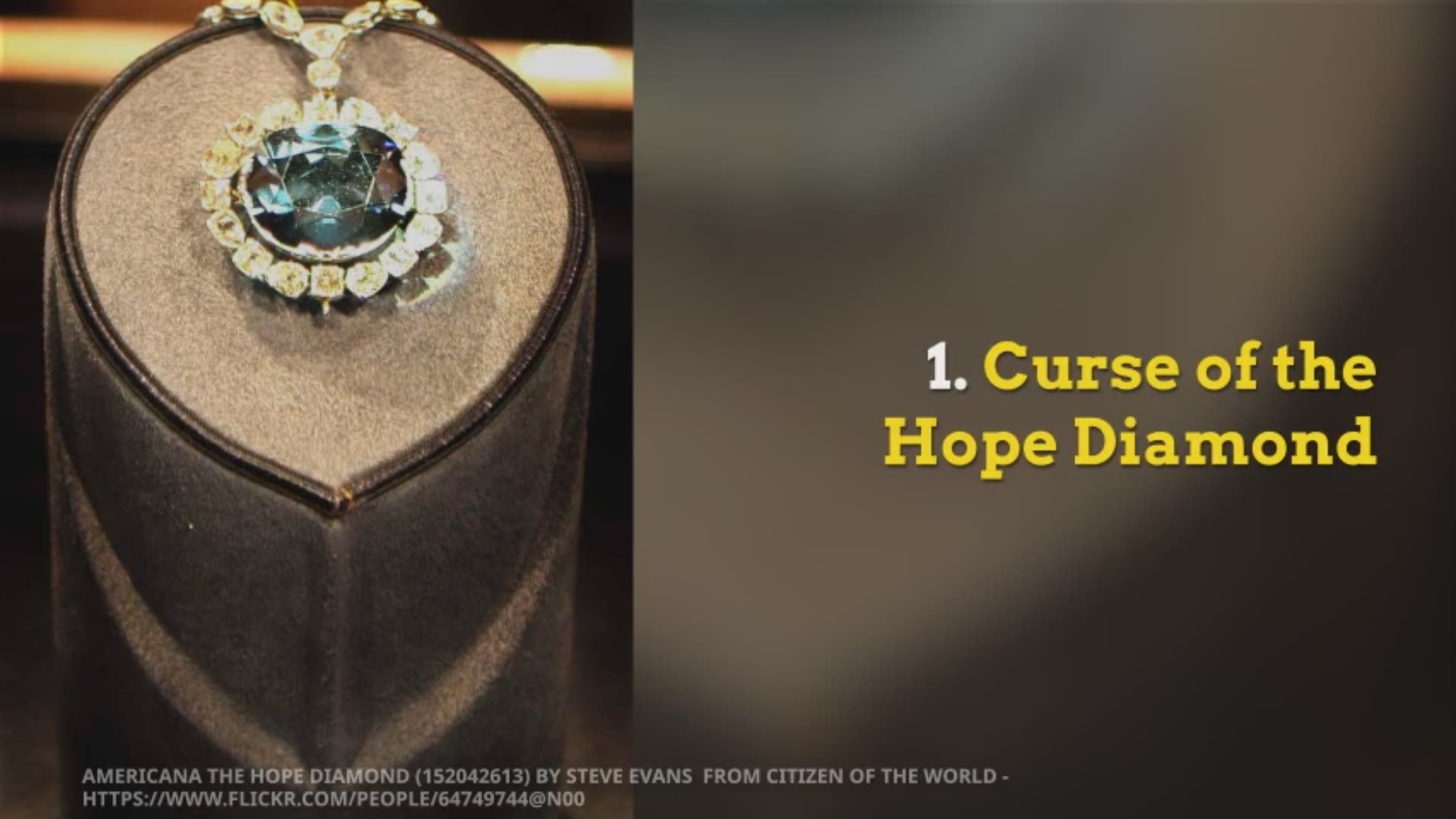 Thackery Binx, is that you?

If you're superstitious, you may avoid black cats.

While some cultures view black cats as good luck, others fear a cursed life if they cross in their path. In D.C., locals and guards on Capitol Hill fear one black cat in particular.

Legend has it that the ghost of a black cat has been seen running lose in the basement and halls of Congress.

A few hundred years ago, cats were brought into the basement of the U.S. Capitol building to kill mice and rats. According to legend, Demon Cat is one of those cats who never left.

The creepiness in this urban legend is that the appearance of the cat is allegedly associated with misfortune and national tragedies. Some say the cat's first appearance was to foretell the death of John Quincy Adams. The cat was also said to have appeared before the assassinations of Abraham Lincoln and John F. Kennedy.

Greg from Facebook told us about the following, true story:

In 1971, for a 16-month period, an unidentified serial killer abducted, raped and strangled six female girls in D.C. The victims were all young African American girls, ages 10-18. Unfortunately, no one was ever charged for the crimes.

The scariest thing about this story is, unlike all the other tales we've told you, this one is 100 percent true. Freeway Phantom is the name that was given to the killer. Although it's still unsolved, the case remains opened as a cold case with D.C. Police.

Did we forget an urban legend in your area? Go to our WUSA9 Facebook page and share your urban legends.