From unrest to joy, DC's week of George Floyd protests made space for a spectrum of emotions 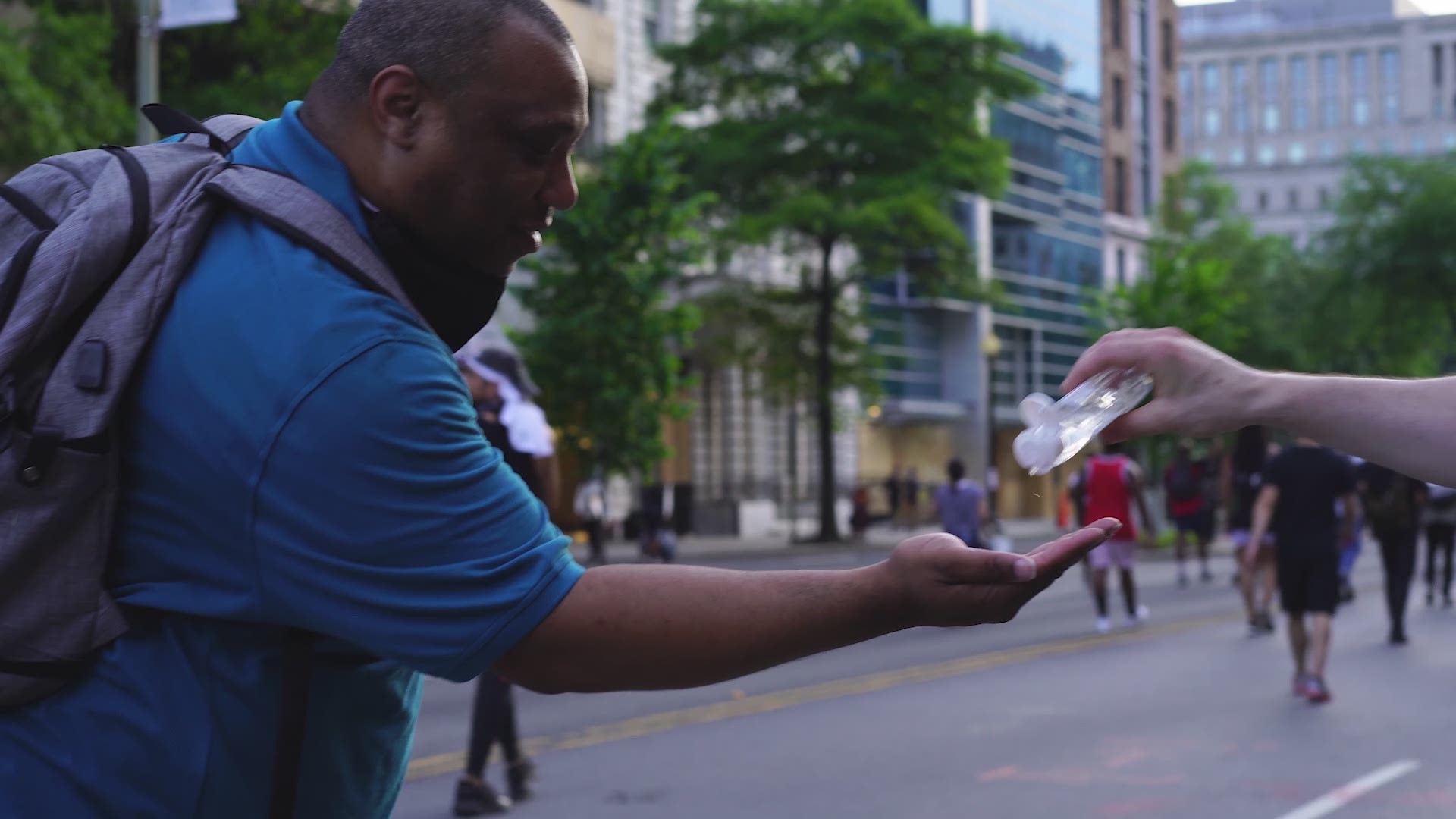 WASHINGTON — For eight days straight, Washingtonians have taken to the streets to make their voices heard, protesting police brutality in the wake of George Floyd's death while in Minneapolis police custody. They've wept together for the lives lost, taken refuge in a stranger's home to avoid arrest and shouted messages like "no justice, no peace." They've brought their children to see what they are fighting for and they've engaged in difficult conversations over fences about what real change would mean. And some even turned to rioting and looting.

Though this week began on a note of unrest, as tear gas was used to clear protesters from streets to make way for a photo op and more than 300 people were arrested, the mood in downtown D.C. Friday was notably celebratory.

In bright yellow lettering the words "Black Lives Matter" were painted as a massive mural lining 16th Street, leading up to the White House. D.C. Mayor Muriel Bowser christened the 1,000-foot stretch the "Black Lives Matter Plaza." Conga lines and dance circles were formed in the plaza, happy birthday was sung for what would have been Breonna Taylor's 27th birthday and an 8-minute and 46-second moment of silence was held in Freedom Plaza honoring George Floyd with MLK's "I've Been to the Mountaintop" speech broadcast through the streets as a precursor. And when pouring rains descended on the District, crowds thinned, but a faithful few could not be deterred.

Here's a timeline of how George Floyd protests have unfolded in Washington, D.C.

May 25: George Floyd, a 46-year-old man, was pinned down by his neck by a Minneapolis police officer Derek Chauvin, who keeps his knee on Floyd's neck for 8 minutes and 46 seconds. The incident is captured on video. Floyd, who is repeatedly heard in the video saying he can't breathe and asking for Chauvin to get off his neck, died that day.

May 26: The video went viral on social media and the Minneapolis mayor fired all four officers involved in the incident. Protests against police brutality erupt in Minneapolis.

May 27/28: Protests erupted in cities across the country including Los Angeles, New York, Memphis, Philadelphia and Atlanta.

May 29: Chauvin was arrested and charged with murder and manslaughter in Floyd's death. The first night of protests begins in D.C. with a crowd of a couple hundred marched from 14th and U Streets Northwest to the White House. The White House was locked down under U.S. Secret Service order for a little more than an hour. Crowds of more than 100 remained at the White House well past midnight and into Saturday morning.

May 30: In an attempt to social distance, the Black Lives Matter movement held a protest via caravan, but hundreds still gathered outside the White House. The Secret Service closed Lafayette Park and put on riots gear. As the night went on, tensions rose and things get heated. Tear gas was used on protesters on multiple occasions, fires were set, pepper spray was deployed by police, water bottles were thrown at officers and stores in Georgetown and CityCenter were vandalized.

May 31: A smaller protest was seen in Prince William County, and Virginia declared a State of Emergency until June 3. Howard University students led a march to the White House and a prayer vigil was held at the Lincoln Memorial. Tear gas and pepper spray was again used on protesters in Lafayette Square. After saying she wouldn't Mayor Bowser announced a  citywide curfew for 11 p.m. to 6 a.m. Fires were set all around town, mainly in trashcans, but an American flag was seen burning, the lobby of the AFL-CIO building was set on fire, and the nursery of St. John's Church caught fire.

June 1:Bowser again announced a curfew, but started it at 7 p.m. through 6 a.m. for both Monday and Tuesday evenings.Tear gas and pepper spray were deployed by law enforcement around the White House and Lafayette Park approximately 30 minutes before the curfew went into effect. Shortly after, President Trump walks to St. John's Church to pose for a photo with a Bible. Vandalism was seen around town, including a burnt cop car near 14th Street. Some looting occurred in Chinatown. Late in the evening, protestors were funneled by police into Swann Street off 15th Street, where at least one resident sheltered dozens of strangers in his home overnight to help them avoid being arrested for being out past curfew.

June 2:Faith leaders gathered at St. John's to address the D.C. protests and Trump's visit to the church, the Secret Service closes several roads around the White House, and Bowser says more than 300 arrests were made after Monday's protests. The National Guard has an increasing presence in Lafayette Square, which continues to be a hotbed of protest activity. Sen. Elizabeth Warren was spotted among the protesters. Polling places around the District still had long lines well after the polls close on Primary Day.After midnight, protesters break a portion of the fence outside the White House.

June 3: Bowser reinitiated the curfew, but only from, 11 p.m. through 6 a.m. and joins the protesters in the afternoon. Unmarked law enforcement officers who will not say which department they belong held the perimeter outside the White House, which has been pushed further and further out as protests continue. Army soldiers are bused in to guard the White House. No arrests are made.

June 4: The three other officers on scene during Floyd's death are arrested and charged. The mayor decided that after a peaceful Wednesday, she would not enforce a curfew Thursday. A "die-in" was held at the MLK Memorial, with participants kneeling on the hot pavement for 8 minutes and 46 seconds to honor George Floyd's life. ACLU filed a lawsuit against Trump and his administration for the use of tear gas against protesters Monday. The rain cleared out many protesters, but a dedicated few remained at the Lafayette fence. No arrests are made.

June 5: Bowser again decided a curfew was not needed Friday. Artists painted a massive Black Lives Matter mural in yellow lettering spanning several blocks on 16th Street, and Bowser names the area "Black Lives Matter Plaza." Protesters gathered outside MPD headquarters and Freedom Plaza sharing personal stories of police brutality, and calling for changes to MPD's budget. Sen. Kamala Harris was seen in Black Lives Matter Plaza, where an 8-minute-and-46-second moment of silence is held. More heavy rains again disperse some of the crowds, but not before they sing happy birthday to Breonn Taylor and listen to MLK's "I’ve Been to the Mountaintop" speech from 1968.

MPD has said they are expecting large crowds in the District Saturday, and a decision regarding curfew has not yet been made.