'I want to know that I’m making an impact' | Students help shine a light on social media's impact on mental health, body image

Harmful hashtags are appearing on social media which could be in your child’s hands right now. We spoke with teens and experts about how they handle negativity. 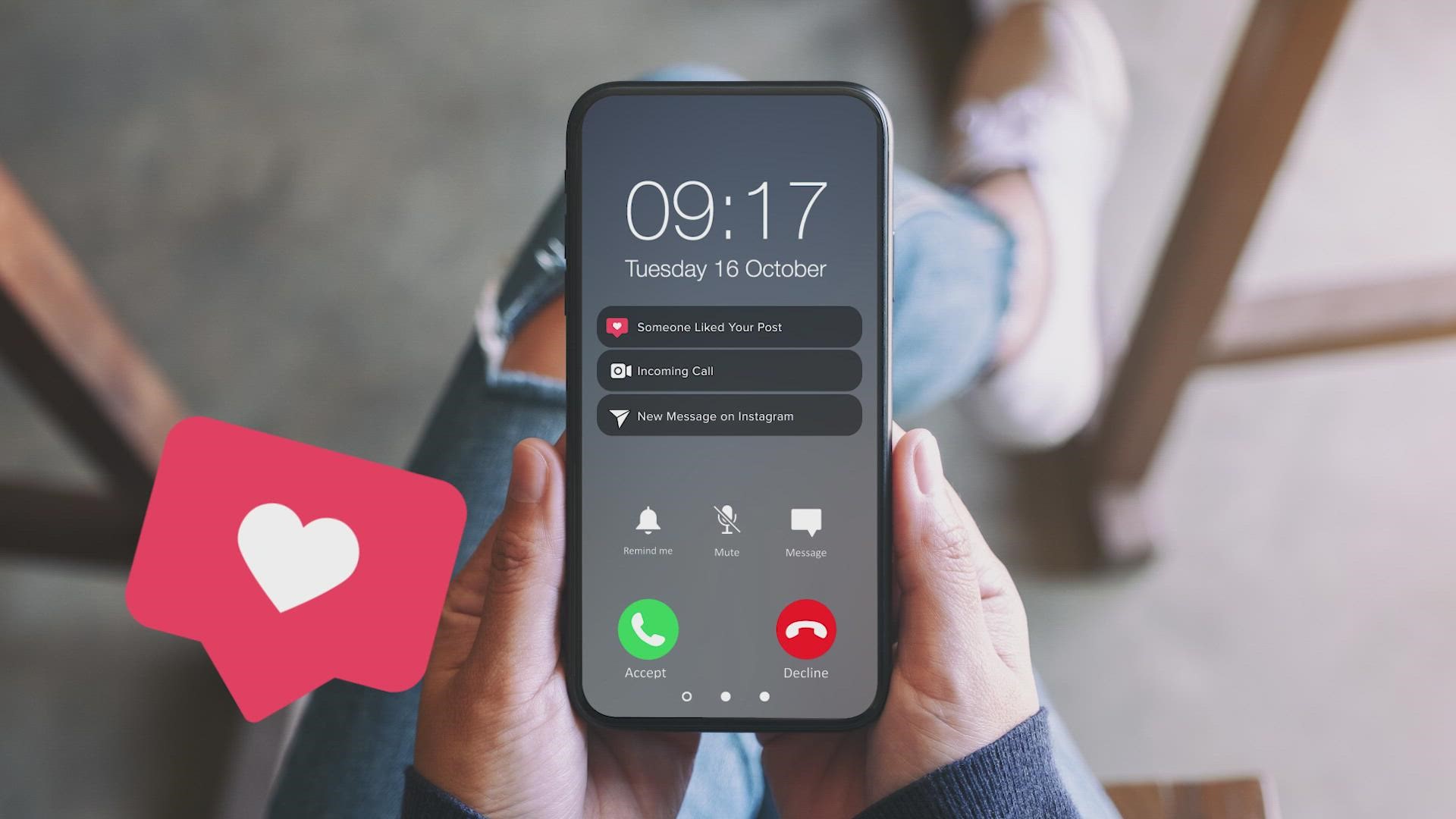 FAIRFAX COUNTY, Va. — In the era of the selfie, social media is now at the center of our social lives. For many teens, their world revolves around what they see or post online.

The phrase “what I eat in a day” is currently a top trending hashtag on social media. With more than 8 billion views on TikTok alone, the trend encourages users to share what they do and don’t eat over the course of a day.

Another popular hashtag trend includes users posting a picture and asking others what they can do to be prettier or asking users to share their body measurements.

It has had such a big impact, especially on teen girls, that TikTok has added additional resources to help those struggling with mental health, eating disorders or thoughts of suicide.

The new well-being guides help provide "expert emotional help" to support users who may be struggling. TikTok’s new features will also direct users to support, such as a Crisis Text Line if they search for the term suicide.

Earlier in the year, TikTok unveiled new tools to help anyone who might be recovering from an eating disorder. The site recently expanded the resources to include a new Safety Center guide on eating disorders for teens, caregivers and educators.

TikTok's announcement of the new features comes after a study commissioned by Facebook found that Instagram can harm the mental health of young users, particularly teen girls, according to the Wall Street Journal.

We spoke with some teens in the D.C. region about the impact social media has had on their lives.

Jada Bromberg is a senior in Fairfax County, Virginia.

"I think it’s harmful because it kind of has energy that’s really negative sometimes and people see the certain image they have to be like and it’s not always realistic," Bromberg said.

She was first exposed to social media when she was 13 years old.

"When I first got social media, I was really excited because I felt like when I didn’t have it, I was missing out. There is definitely a lot of people getting social media at younger ages, like in elementary school,"  said Bromberg.

"At the beginning it impacted me more positively because I felt like now I was part of this. I’m part of this community and I can create my Instagram page and make my Snapchat streaks and I was really into it. I had like 50 Snapchat streaks but over time it really started to consume my life," Bromberg said.

RELATED: VERIFY: Can TikTok challenge filter be removed to see more than what users intended?

Bromberg said she first started to struggle with her mental health in 7th grade, the same year she downloaded her first social media app.

"I would say social media has contributed to my low feelings of self-worth and self-confidence. Seeing other people who seem to be having a perfect life, it’s really difficult because people are most of the time putting their best images on social media and not their worst," said Bromberg.

"I started to feel the negative impacts of it because I was looking at people hanging out with their friends and maybe not always being invited and it would make me start to feel sad when I was alone at my house," said Bromberg.

"I really struggled with feelings of self-harm because I didn’t feel worthy and I was just really battling depression badly. From the moment I woke up to the moment I went to sleep, it was really hard to think about anything else," Bromberg said.

It is a feeling many teens can relate to.

In high school, Bromberg shared her mental health story on social media saying "I was diagnosed with clinical depression (aka major depressive disorder) when I was 13 years old. Sharing my story with others has had a great impact on me, and if you are ready, now is a great time to start sharing yours too."

Immediately after sharing her story, she started to hear from other friends and classmates who had similar feelings.

"At first I felt like I was the only one going through it because I wasn’t really seeing it from other people but now I know that I’m not the only one going through it because I started speaking about my experiences and I’ve been able to connect with so many people," she explained. "Especially over the last several years and on social media, the platform that was kind of rough in the beginning, because I have taken it and made sure I had more of a positive community online. I've since been able to connect with other people so I know that other people have struggled with this and that’s partially why I want to help so much."

Bromberg became the president of the Our Minds Matter movement at her local high school and also started working with This Is My Brave, an organization helping to empower individuals to put their names and faces on their true stories of recovery from mental illness and addiction.

She also started sharing her story through her own music.

"Over time, I have learned how to figure out the ins and outs of social media and use it properly," said Bromberg.

"I try to be more aware of how I’m spending my time on social media and I would say I’m using it for pretty much always positive news. I’m also mostly doing it for work, I would say, and my music account," said Bromberg.

Now she is helping change the culture of mental health and contribute to ending the stigma around it.

"I was really surprised by the reaction that people have had because when I first made the post about my mental health story, I made it March 2020 and I posted it on my Instagram account for Mental Health Awareness Month," said Bromberg.

"I have had so many people that I know and people that I don’t know, acquaintances, strangers who have thanked me for sharing. A lot of the times they say 'I struggle with this too' and for me, knowing that I’m impacting one person at a time, that really means a lot to me because I want to know that I’m making an impact," Bromberg said.

"It does feel so good to know even if it’s just one person one day who says you have helped me, I take that really deep to my heart and I feel really good that I have made an impact," said Bromberg.

According to a study by the Rox Institute for Research and Training, girls who spend eight hours or more a day using technology are five times more likely to feel sad or depressed nearly every day.

With social media usage soaring during the pandemic, the nonprofit also found that 1/3 of girls reported using social media for six hours or more every day.

"I got social media when I was 13 years old and in 7th grade. From there you could say my time on social media was not a big part of my life. I would go on it and it was fun seeing pictures with friends and then as I got older, mostly in high school I would say, I noticed that social media started to get a little more negative," said Stern.

"There would be pictures sometimes and I would think, 'Oh, I don’t look like her' or 'I’m not doing the same thing that that person is doing,'" said Stern.

"Nearly everyone suffers with body image issues and there were times when I would not love my body and so going on social media wasn’t always the most positive experience," said Stern.

Stern said she began to only follow accounts that posted similar inspiring messages.

"I think that internal dialogue is really important. When I recognize that social media may not be making me feel the best way, I would talk to myself and say 'OK, you’re noticing this person is not making you feel good when you follow this account so unfollow them.' I also noticed when I would follow positive accounts or pages that I like, those types of posts will show up which has turned out to be a more positive experience for me and I will now see less and less of the more negative posts," said Stern.

Stern started her own blog called Real and Relatable and began using her platform to post uplifting messages.

"Especially during COVID, I was noticing there were messages that I didn’t love on social media and so I wanted to have a platform to speak out against that and just create a more positive experience on social media," said Stern.

"There’s so many types of people that are beautiful, whether it’s a smaller body or a larger body and everybody is really beautiful and I think that sometimes social media can distort that and make it seem like there’s only one way to be perfect or ideal in society size," said Stern.

Parents may wonder what they can do to help.

Bethany Demers, the mental wellness specialist for Fairfax County Public Schools, said it all starts with talking with your teens and knowing the tools available.

"Almost all youth are exposed to it in someway shape or form. Even if they don’t have their own accounts, they are hearing about what other kids are posting or seeing," Demers said.

"You have resources in school counselors and school social workers and school psychologists who can help you. If you’re not sure how to navigate some of these challenges whether it’s pandemic related, school related or social media related, those individuals can really help you," said Demers.

"There are a lot of resources just in general for parents, Common Sense Media is one that comes up for me all the time. Our website for Fairfax County Public School has a lot of information from them because it walks through at what age should I be doing different things or having different restrictions or monitoring differently because it changes as our kids grow older," said Demers.

Demers said it is also a good idea to model the behavior you want to see.