The richest man in the world racked up $16,800 in parking tickets during renovation to his DC mansion

Of the 564 citations written over three years, $5,600 worth of tickets were unpaid, some dating back years. 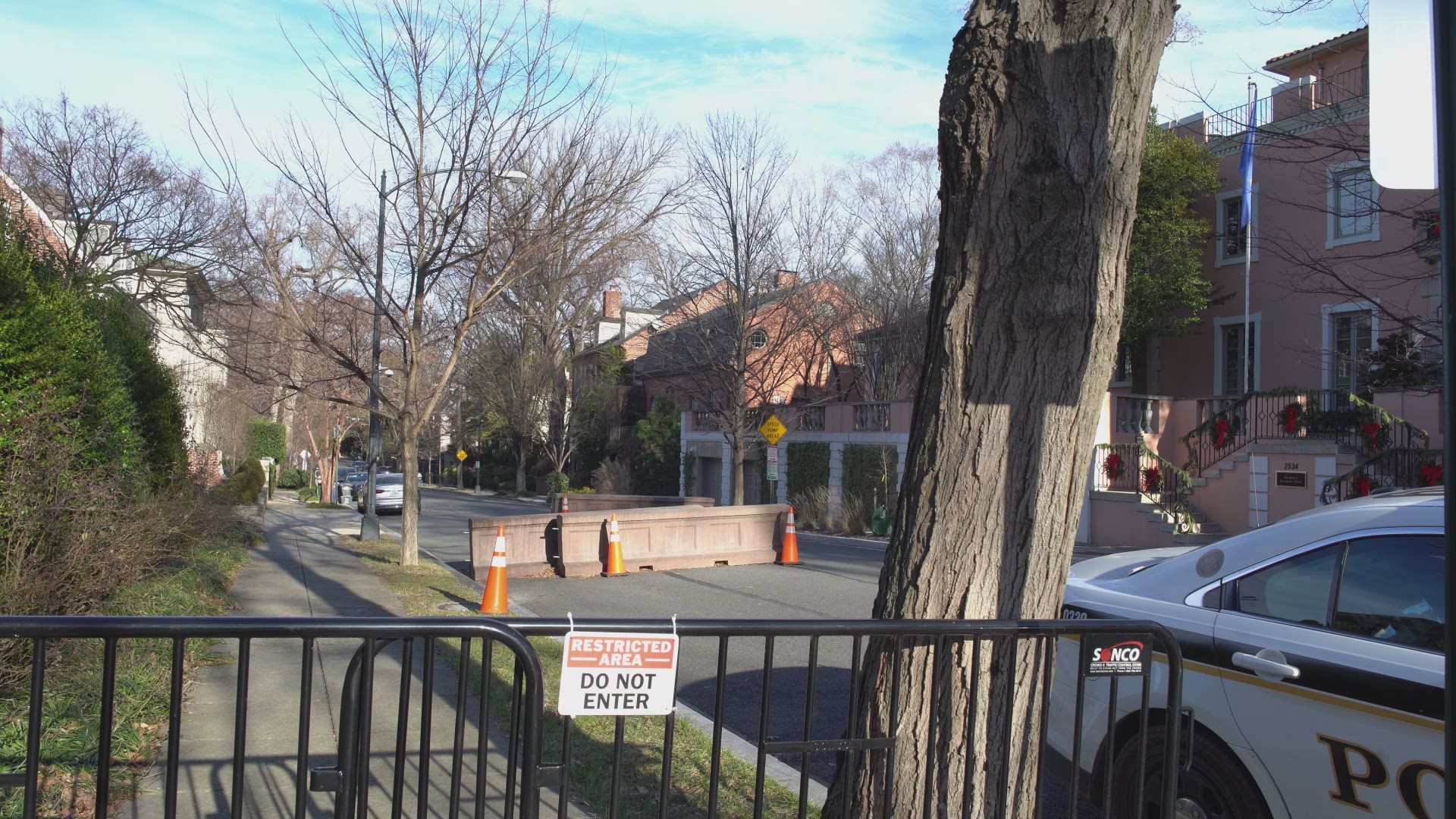 WASHINGTON — In one of D.C.'s quieter neighborhoods, Beaux-Arts mansions in Kalorama are occupied by some of the city's most notable residents, including the Obamas and Ivanka Trump. But the biggest home on the block belongs to none other than Amazon billionaire, Jeff Bezos.

Bezos paid $23 million in 2016 for what used to be the Textile Museum on S Street, Northwest and promptly launched a $12 million renovation to transform the former museum into his private residence. At 27,000 square feet, it was already the largest house in the city.

"It’s the Amazon embassy," neighbor Kate Carr said. "I think he’s about to take on this whole section of the city."

Kalorama's newest power player is no secret, but his massive restoration was even harder to miss.

A WUSA9 investigation uncovered a hidden cost to one of the most lavish home renovations the District has ever seen: a staggering $16,840 in parking tickets.

"I would be surprised if it even registered as a line item on the final inventory," Wofford said

Records obtained from the D.C. Department of Public Works reveal that between October 2016, when Bezos purchased the home, and October 2019, when work began to wind down, the city handed out a staggering $16,840 worth of parking tickets in the 2200 and 2300 blocks of S Street directly outside of the mansion. The total amount in the extended neighborhood is nearly $18,000. 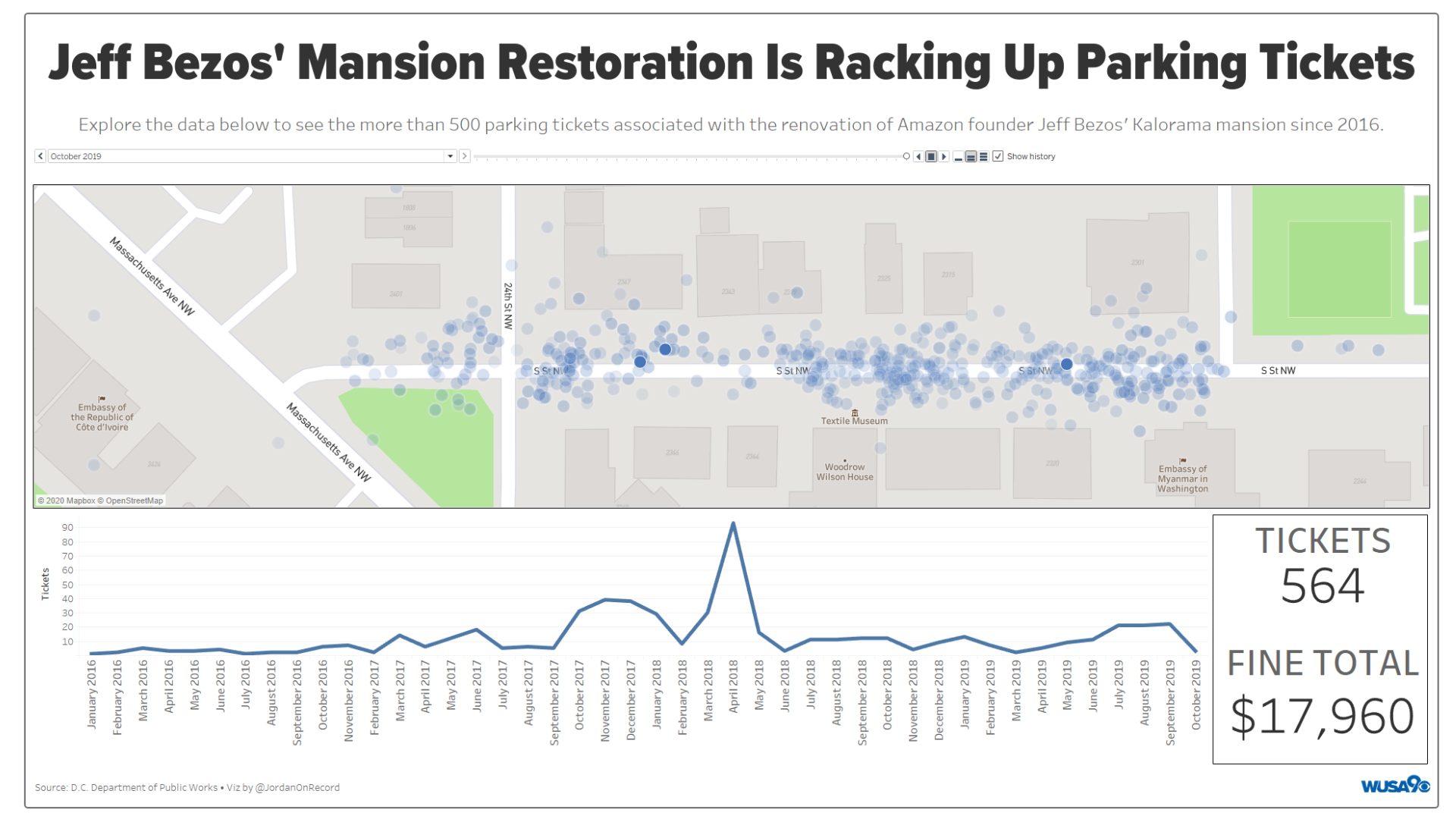 CLICK HERE FOR AN INTERACTIVE VERSION OF THIS DATA

Records show 564 citations in all, with 93 handed out just in April 2018. That’s about three parking tickets per day at the height of the work. In addition to ignoring "no parking signs" or parking in spots reserved for residents, WUSA9 found tickets issued for vehicles blocking crosswalks and obstructing the path of pedestrians.

At least two contractors who confirmed they did work on the Bezos home told WUSA9 that anyone hired for the renovation was required to sign a non-disclosure agreement. So connecting the record of every single parking ticket to a vehicle working on the Bezos home would be impossible.

But day after day, WUSA9 investigative reporter Eric Flack watched workers going in and out of the Bezos home to their ticketed vehicles. One van for an upscale home electrical design company doing work on the home got 14 parking tickets over a three-week stretch.

WUSA9 also ran every ticket number included in the records through the Department of Motor Vehicle’s website and discovered more than $5,600 worth of tickets remain unpaid, some dating back years.

After WUSA9 submitted every single parking ticket, paid or unpaid, to a source close to the Bezos construction project, the source said, "From the start of the project, the general contractor worked to mitigate the parking challenges in the area by setting up off-site parking and shuttles to and from the site."

The source added that all the unpaid fines had been addressed.

"All the outstanding tickets in question have been paid," the source said.

1 / 9
Anthony Poff Photography
Amazon founder Jeff Bezos bought the largest home in D.C. in 2016 for $23 million, and promptly began a $12 million renovation. Take a peek at how the interiors looked, pre-Bezos.

The money might not matter much to the world’s richest man, but the parking problems have put the squeeze on neighbors. There are at least three "NO PARKING FOR CONSTRUCTION" signs in front of neighboring buildings, and records show the city has occasionally received complaints about the illegal parking. None of Bezos' new neighbors agreed to speak on the record for this report.

More than three years later, Bezos' manse appears done as it was debuted to the Washington social scene at the Alfalfa Club Dinner afterparty on Jan. 25.

"The day that he came to visit, it looked like a Red Cross relief zone, more than a renovation," Wofford said. "I mean there were trucks idling, cars moving in and out, people hurling boxes like they were putting out a fire on the prairie."

This could mean D.C.’s big man on campus is about to move in. Let's just hope he can find a place to park.

RELATED: House where Jeff Bezos founded Amazon is up for sale