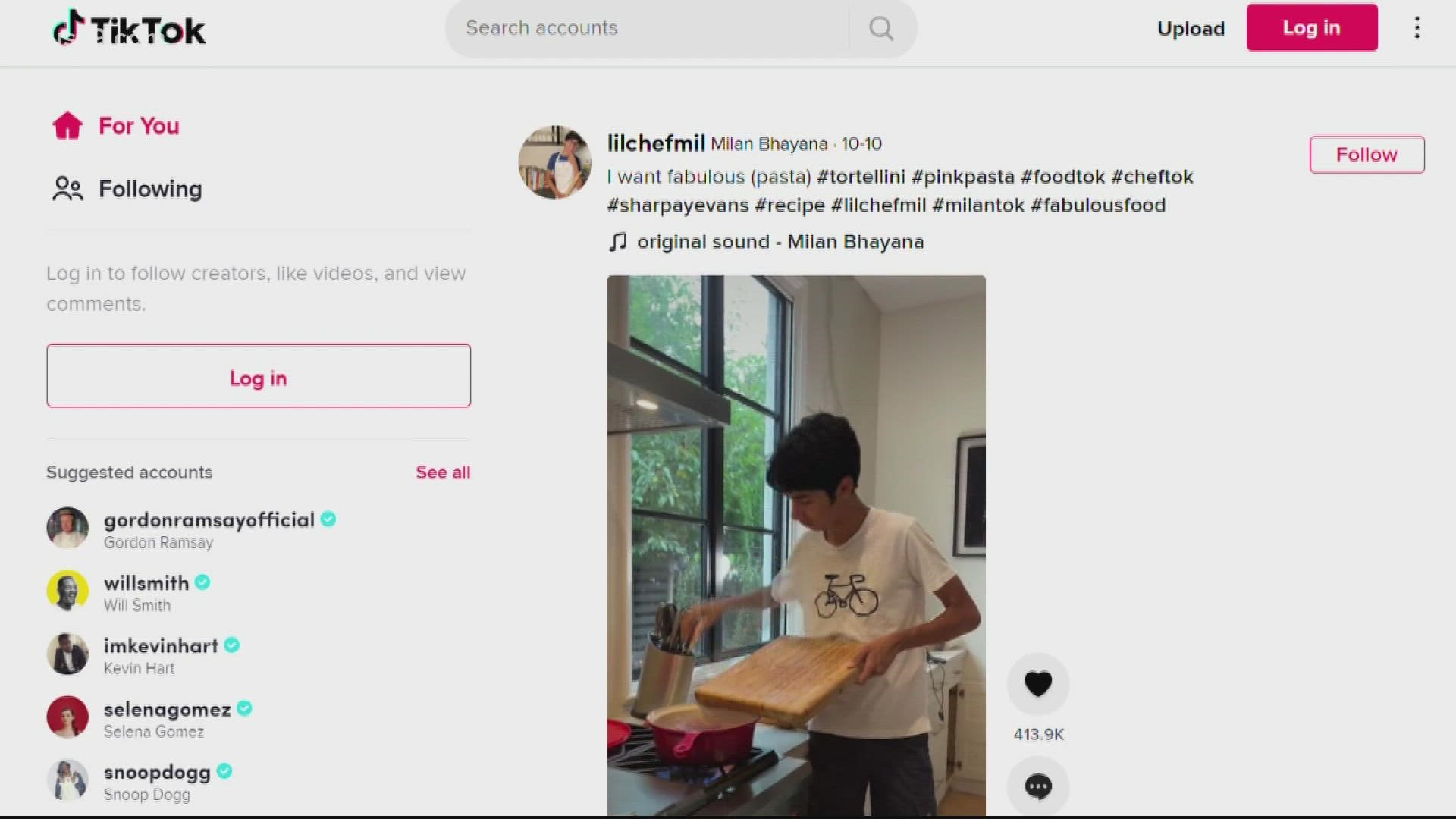 CHEVY CHASE, Md. — For most of us, whipping up a plate of tortellini takes no longer than a few minutes. We either microwave it, boil it or unpackage it from the restaurant which prepared it for us.

Meeting 16-year-old TikTok celebrity Milan Bhayna, you quickly realize that's not his style at all. Bhayana has more than 754,000 followers on the social media app as of this article being published. And they're not watching him flash boil tortellini that he just brought home from Whole Foods.

"Honestly, I have no idea," he told me when I asked how he had amassed so many followers. "I started out on TikTok about a year ago. Thanksgiving Day, actually, of 2020. I think the uniqueness is that I'm young and I cook a lot of really weird dishes."

The day I arrived to meet this youthful colonel of culinary creations at his family home in Chevy Chase, Maryland, Bhayana was already hard at work on a recipe he began at 3 p.m. He wasn't expecting to finish until after midnight.

"Midnight?" I asked his mother Chandrani Ghosh in disbelief. "On a school night?"

"It's a half day tomorrow," she replied with a sigh; clearly having grown accustomed to her son being engaged in many late-night charades in the kitchen.

Bhayana is a sophomore at Bethesda-Chevy Chase High School and he just turned 16 years old. In meeting him, I found a very respectable, well-spoken young gentleman who exhibited wisdom well beyond his years in executing recipes with precision and skill in the kitchen.

I mean, what other 16 year old would his mother trust to operate a flame thrower inside of the house?

Chevy Chase, Maryland. Perhaps one of the only places on Earth where a 16 year old is entrusted to use a flame thrower in his own house.
I'll be introducing you to this youthful prodigy chef who's amassed almost 800K followers on TikTok. #OpenMic w/ @reesewaters 7pm @wusa9 pic.twitter.com/oH9YLDMyMl

As I arrived, Bhayana was in the early stages of crafting a tantalizing Italian dish. There were beets boiling on the stove, several meats being sliced and flour being prepared. He's making pasta. A beet tortellini. From scratch.

Naturally I was curious how a 16-year-old boy who had never worked in a restaurant was so knowledgeable about cooking.

Sadly, I wasn't there when the tortellini dish was completed and consumed after midnight. However, an audience of nearly three million people so far viewed the finished TikTok video that Bhayana, his mother and sister helped to produce. Other than the cooking supplies, they only used two pieces of equipment: a phone and a lamp aiming additional light at Bhayana as he cooked.

"I think my sister is a big part of the success," Bhayana said. "She does all my voiceovers. I think a good part of that is our sibling dynamic."

Mother Chandrani Ghosh is a more visible participant in Bhayana's success. She appears with him on the NBC Peacock show 'Top Chef: Family Style.' hosted by singer Meghan Trainor and Marcus Samuelsson.

The two recently returned from taping the series in Los Angeles.

I was also curious about the feedback he receives from his online followers. We know the internet and social media can be a gigantic toilet bowl for people to share unwanted and disrespectful feedback on any topic at any given time.

"People on TikTok are overwhelmingly nice which is a very nice break from the rest of the internet," said Bhayana with a laugh.

A recent article described Bhayana as a 'whiz kid' and I wanted to know if he felt that mantra fit.

"How would I describe myself?" he asked rhetorically. "Passionate."

Ghosh and Bhayana are preparing for a large influx of family for the approaching Thanksgiving holiday, some coming from as far as India.

I asked if his cooking prowess unintentionally landed Bhayana into a form of family indentured servitude; whether his family now had the expectation that he was the head chef of the household.

"I've been told that for Thanksgiving I better be in the kitchen for four days straight," he said with a smile. "They're not letting me out. So, they've got high expectations."

You can join Bhyana's growing TikTok audience HERE at lilchefmil.

And if you'd like to help me grow past my current four followers, you can follow me HERE at LongoAF.

RELATED: The 'Soul Strolls' tour through Congressional Cemetery is the most DC thing to do for Halloween 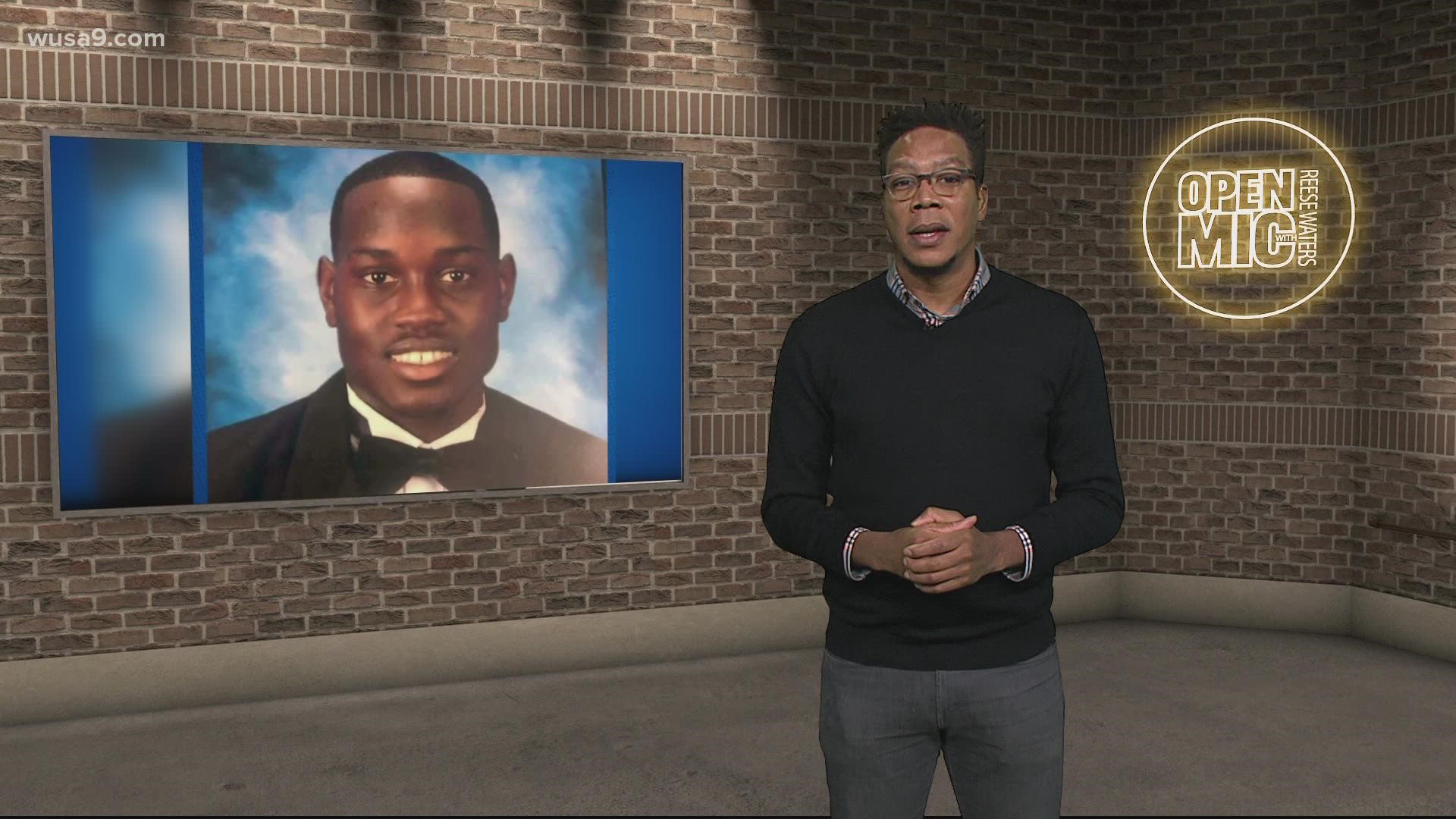