'We did all we could, but it wasn't enough' | Asteroid simulation ends with direct hit in NYC

A hypothetical asteroid will hit the earth in eight years -- here's how they'd try to mitigate the risk. 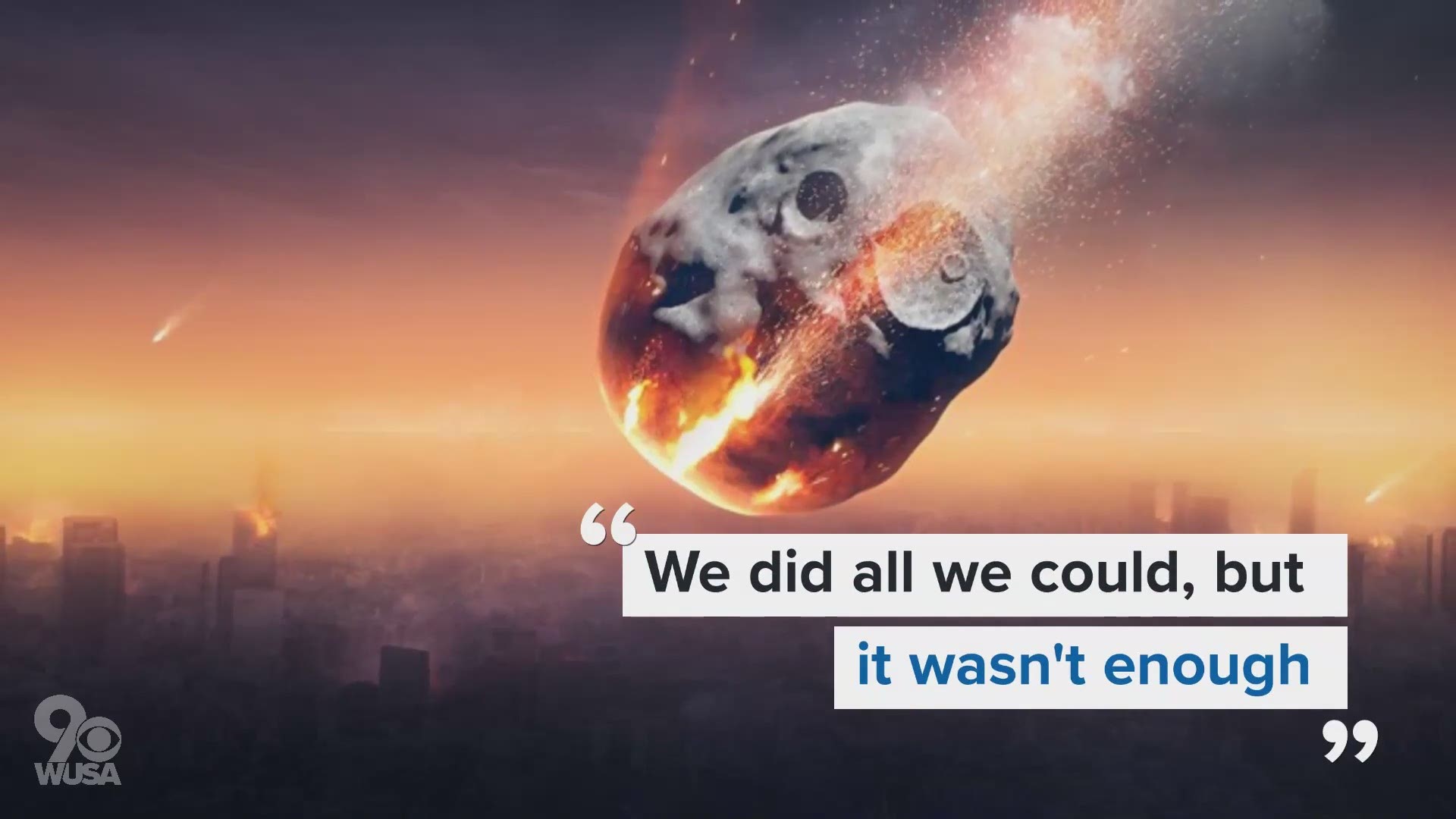 WASHINGTON - If a large asteroid were heading to Earth -- what would happen? Would it hit without warning? Could the countries of the world team up to change it's path? Would it make a difference? Or would it hit the earth and wipe out several city blocks, states or worse?

A group of scientists and planners from all across the world met this month in College Park, Maryland to run through a practice scenario and discuss what they'd do if a large asteroid was discovered in an orbit heading towards earth. This exercise was completed over a five day time frame, during which they ran through a 10 year timeline of discovering, observing, and trying to mitigate the threat from a large asteroid heading towards the earth.

I was fortunate enough to be among a small group of journalists present and a part of that conversation. The following will take you through a journey inside the minds of scientists discovering this Near Earth Object, debating tactics to divert it, and ultimately what happens when you try everything you can, but it's not enough.

Day one: Discovery of large asteroid, will come close to Earth

The space rock is between 330 and 1000 feet in size, somewhere in between the length of 6.5 school buses to the height of two Washington Monuments stacked on top of each other.

They have been tracking this asteroid nightly since discovery -- and have confirmed that there is a one percent chance, or one out of 100, that it could impact the earth. There is a 99 percent chance, 99 out of 100, that it will safely pass by our planet without issue. The graphic below shows the "risk corridor" focused around the asteroid's orbit.

Question: There's a one percent chance a large asteroid could hit the earth -- what should scientists do?

Action: Their mission is to gather as much information as possible on 2019 PDC to raise our confidence level of it's 2027 track. Then, figure out what needs to be done to mitigate potential risks. 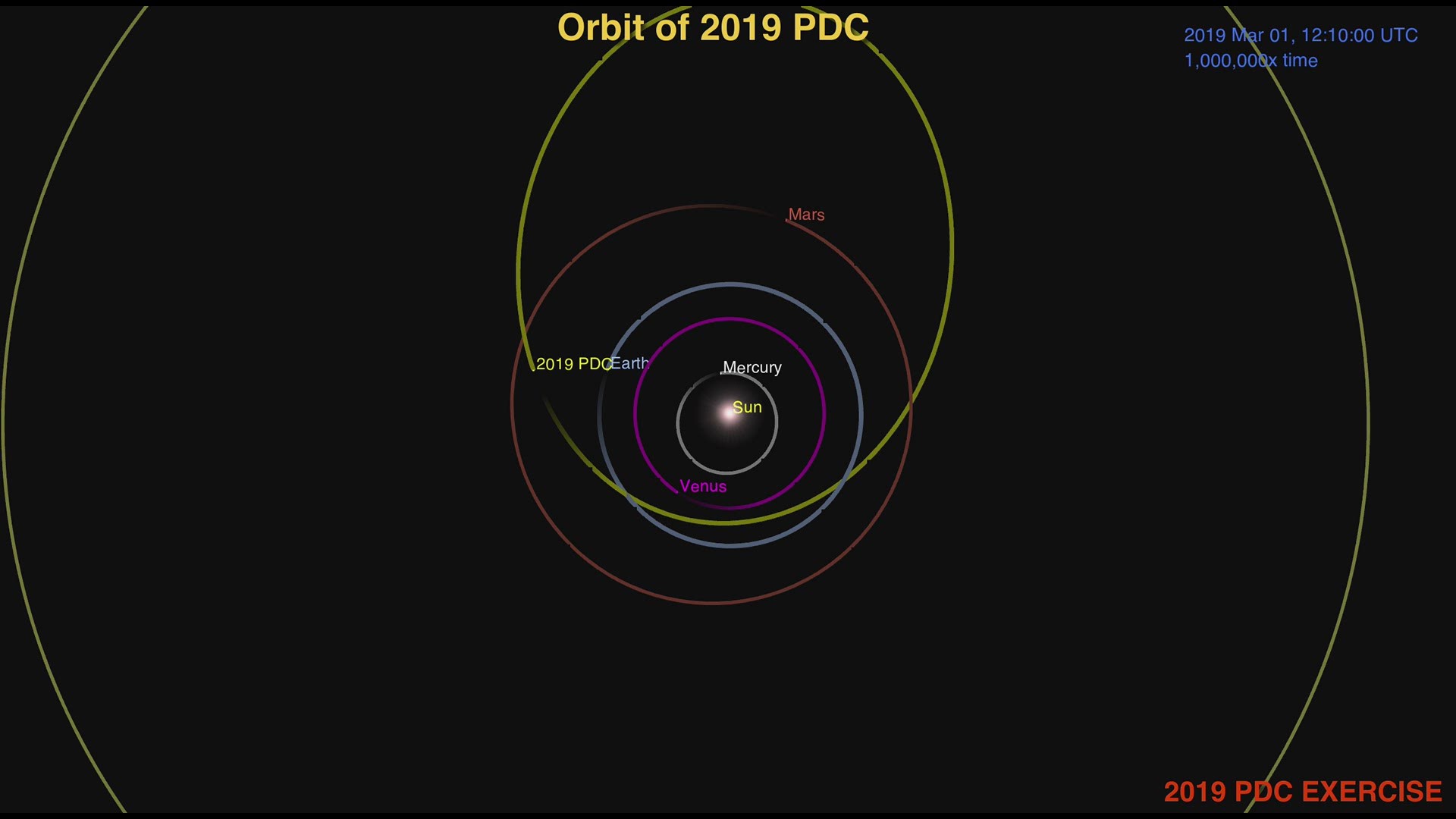 The date is July 29, 2019. Scientists across the globe have been working to observe and gather hundreds of observations in the last 3 months of 2019 PDC, working to narrow down its size and trajectory. They now estimate that there is a 10% chance for a direct impact, as opposed to a 1% chance. 10% is significant, it's unprecedented, as Paul Chodas from NASA's Jet Propulsion Laboratory and the Center For Near Earth Objects (cNEOs) explained during the day's briefing.

It's 480 to 850 feet in size -- between the size of 10 school buses and one-and-a-half Washington Monuments. Size matters. There's a huge difference between these impact ranges. The energy released upon impact would vary from 100 to 800 megatons, unprecedented in the modern era. For comparison, the 1980 Mt. St. Helen's released 24 megatons of energy.

When a small asteroid, called a meteoroid, enters Earth's atmosphere, it burns up, sometimes emitting a light known as a meteor or fireball, depending on the brightness. When a larger asteroid enters the atmosphere, part of it would stay intact to hit the earth and cause damage. For meteoroids up to a half of a mile in size, local damage can be caused.

NASA scientists have a unique computer model that can generate what it would look like as an asteroid enters the atmosphere, showing if a given asteroid would break up, burst in the air, or impact the ground. Effects on the ground range from Thermal Damage, damage from the high heat of the incoming asteroid, to Blast Damage, created by the wind from extreme pressure differences, and possible Tsunami if the impact is over water.

Based on the hundreds of observations gathered over the summer, there is now a risk continuum that scientists were able to piece together, shown in the graphic below. This risk continuum shows the corridor of locations that are possibly in the path of the asteroid. Within that entire path, it will only hit one point. Remember: there's a 10 percent chance this could play out and a 90 percent chance it won't.

This path shows potential impacts in the US from San Francisco to Denver, Chicago, and D.C., which includes tens of millions of people, important infrastructure, financial hubs, and energy facilities. Also included in the risk continuum is a swipe across the African Continent.

A new group has been developed, called the Space Mission Planning Advisory Group, that includes space agencies from around the world. It's mission is to help coordinate the international response to this threat, including a series of space missions to observe the asteroid and prepare to deflect it away from a crash course to Earth.

The asteroid is still observable for six more months during its current revolution around the sun, so scientists will continue to gather data.

Mission: There's a 10 percent chance a large asteroid could hit the earth -- this is unprecedented. What does the world do?

Action: We need to design missions to mitigate the risk or deflect it away.

Day three -- It's heading to Denver. We need to stop it.

The date is December 30, 2021. World scientists have been hard at work to gather more information about 2019 PDC and how to stop it from hitting the earth. They've been able to get a better picture of the shape and size of the asteroid. It's 850 feet long by 450 feet wide, similar to the shape of a snowman with a head and abdomen. With this new size, the new impact release would range from 150 megatons to 500 megatons.

But with more important observations since two-and-a-half years ago, the news turns worse and worse. Unless the asteroid is deflected, it will hit earth. And it's trajectory is to the greater Denver, Colorado area. Below is the risk map, showing the greatest possible outcome based on the statistics of 2019 PDC. The extent of impact in downtown Denver would be unsurvivable if nothing changes.

The video below shows the general heat map of impact as the asteroid plows into the greater Denver area. 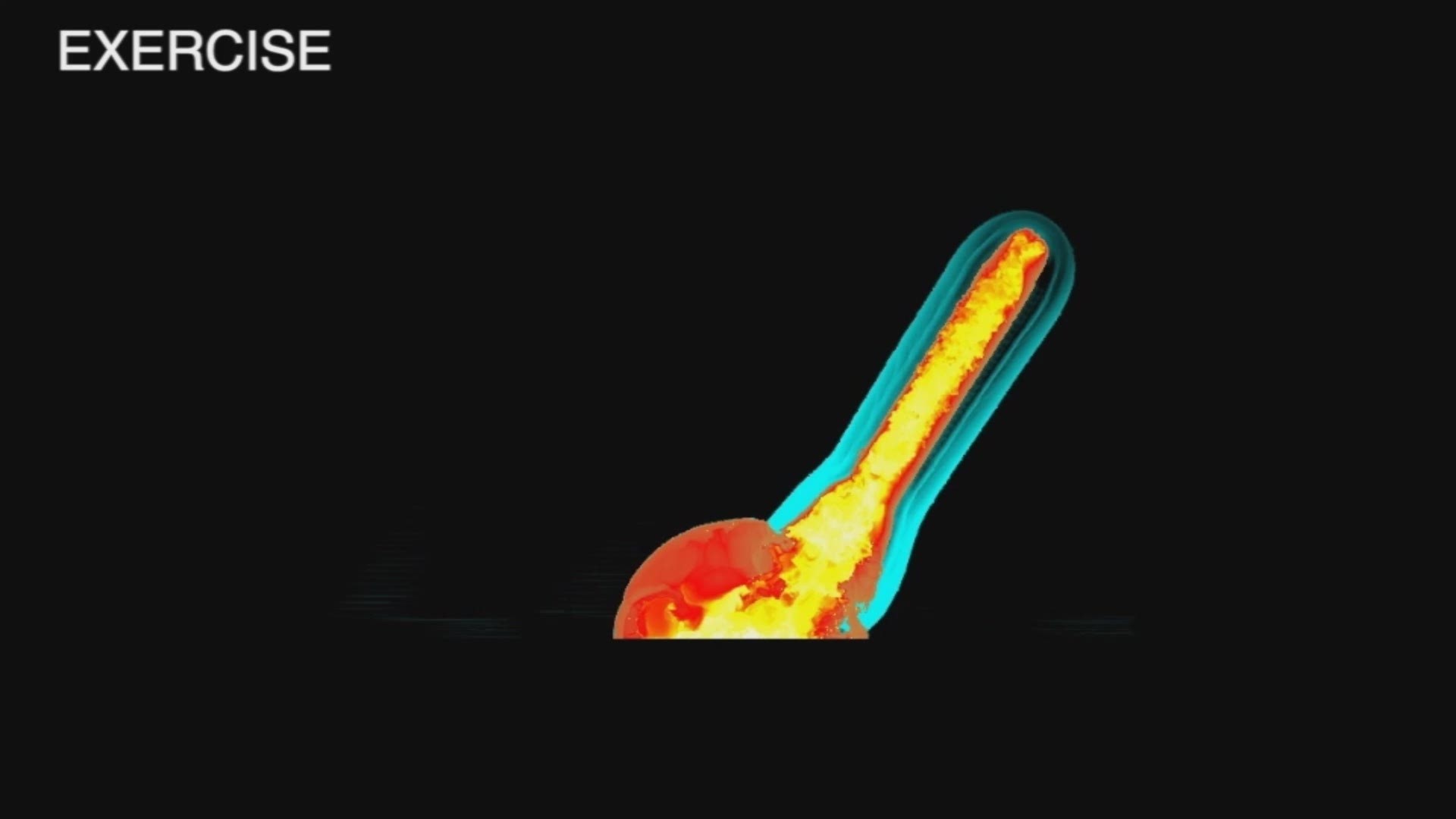 Five-and-a-half years until impact is not a lot of time to figure out how to eliminate this asteroid from taking out a major metropolis in the US.

Mission: We need to deflect the asteroid or destroy it.

Actions Taken:  A group of six Kinetic Impactor spacecraft will be built by NASA, the European Space Agency, the Japanese, Russian, and Chinese Space Agencies. These Kinetic Impactors have a mission to hit the asteroid with large force to slow the speed and deflect its trajectory away from the earth. In addition, NASA will be launching two rendezvous spacecraft to watch the asteroid closely during this process.

The date is September 3, 2024. Over the last nearly three years, three Kinectic Impactor missions successfully accomplished missions of deflecting asteroid 2019 PDC, but in the process a large fragment broke off that remains on a collision course with Earth.

This fragment is 165 to 260 feet in size, and is heading to the Eastern U.S. or Atlantic Ocean, but the exact location of impact is not yet known yet. The graphic below shows the risk swath continuum. The asteroid fragment could hit any of the areas on the map, based on its trajectory, but would only it one single point within the entire continuum. Locations in the risk area include Lincoln, Nebraska to New York City.

New ground-based observations will begin tracking the asteroid fragment once it becomes visible to large telescopes in two months from now.

An international planning group is now putting together emergency plans for a space mission with a goal of disrupting the fragment still heading for earth. They are exploring using a nuclear devise to break up the asteroid into much smaller fragments that could burn up completely as they fall through Earth's atmosphere and lower the risk of significant impact and damage on the ground.

Mission: The asteroid is heading to the east. We need to stop it.

Actions: At this point, deflection techniques are not an option. The only possible last solution to mitigate the threat is a higher-impact disruptive mission. There are 3 possible intercept missions that could use smaller nuclear devices.

The date is April 19, 2027. "We did all we could, but it wasn't enough" -- I heard this line used multiple times within conversation that morning.

The attempts to deploy a last-minute nuclear disruption failed. The fragment of asteroid 2019 PDC will hit Central Park in New York City 10 days from now on April 29, 2027.

The 60 m asteroid is heading to New York, will enter earth's atmosphere at 43,000 miles per hour. It will produce a megabolide, a very large fireball. It will release somewhere between five and 20 megatons of energy in an airburst at 5,000 feet above the surface, shown in the video below. 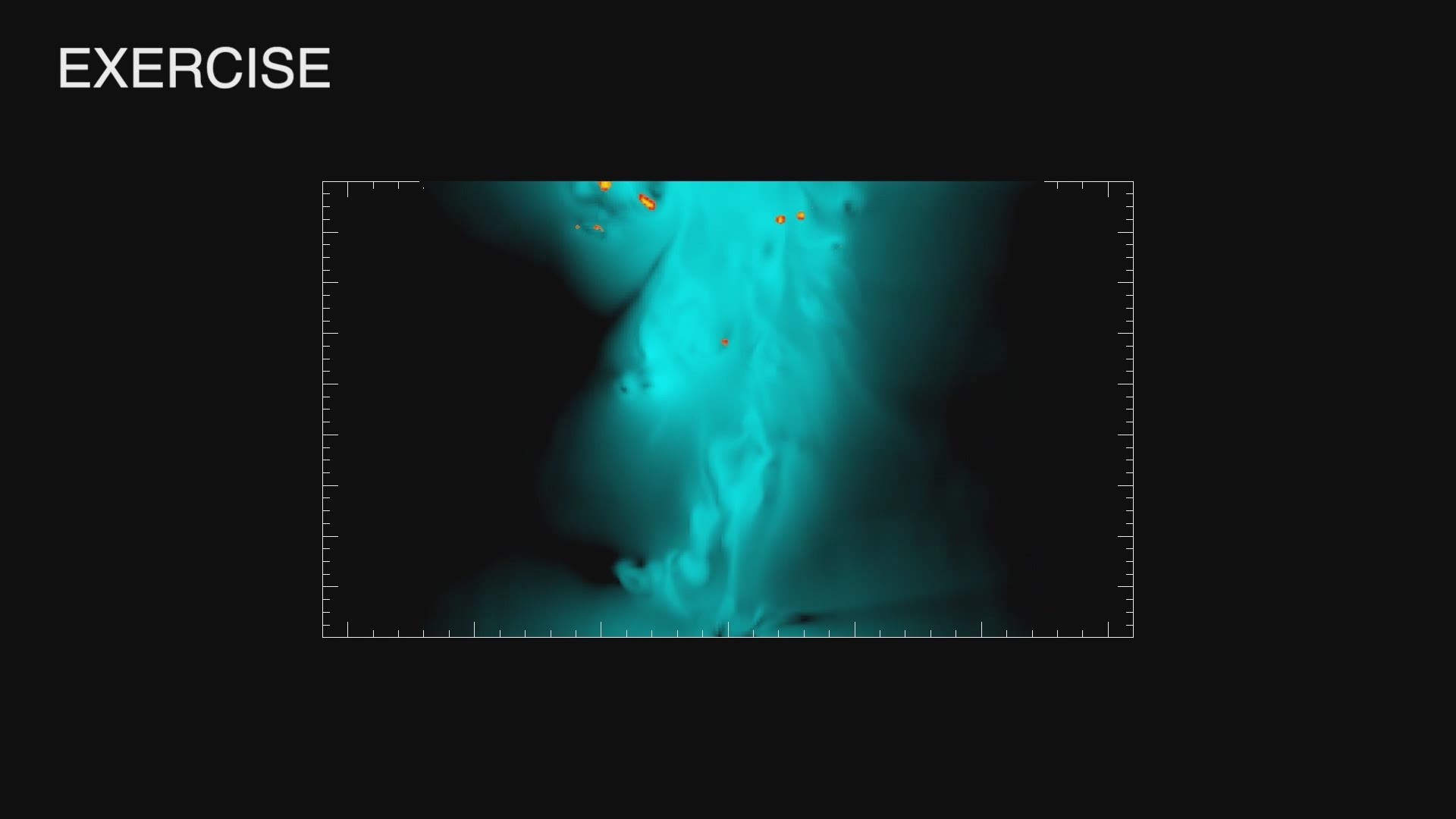 In the months leading up to now, emergency management and government officials with local, state, and federal government have been planning frantically for a mass evacuation and a detrimental asteroid strike in the largest financial hub and most populated city in the country.

"We have to evacuate the people."

Over the next 30 minutes, we role-played:

'What are those people thinking?'... 'How do we evacuate those who don't have the means to evacuate themselves?' ... 'I live one state away and am worried about asteroid survivors invading and interrupting my way of life' ... 'I want to help, but don't know how' ... 'We need to hold the government accountable for their failure to stop the asteroid'...

In My Opinion -- this was the most fascinating portion of the entire week, because I witnessed the human side of each scientist, the compassion for society, and effort of teamwork in the mission.

How do you evacuate over a million people from a small island in just 10 days? What about those east of New York City on Long Island -- if they're not evacuated, they'll be cut off from the rest of society. Can we move the stock market? What will people have to come back to in 6 months; will there be anything left?

Lessons Learned
This simulation opened up a deeper conversation -- and important one that does not need to be limited to just a few select scientists. As a country, we have plans for hurricanes, earthquakes, and nuclear attacks -- this is the beginning of developing a large-scale plan for a large asteroid strike that may happen once every million years.

You can look at the full simulation at NASA's Center for Near Earth Objects website.

What the government is doing to plan

If there ever was an asteroid with a path very close to earth, you would know about it years in advance. They would try to deflect it and change the impact. Everything that could be done, would be done. They would try slowing it, changing its movement, and nuclear methods are not off the table as a last-resort impact.

And over the past several years, the Federal Government HAS been planning. In fact, the White House published a 2018 report with their protocol for Near-Earth Object threats.