Not all superheroes wear capes.  Some, just have a very fast finger and thumb. 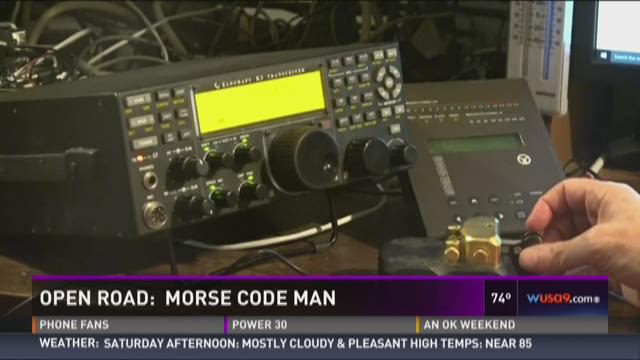 Computers and cell phones have become the norm of communication. What would happen if we faced a catastrophic emergency or lost our electrical grid, making our phones and computers useless? Who would come to our rescue? Well, as it turns out, there are thousands of Americans who still know how to communicate like we did in the 1800's.

From his home in McLean, Jim Talens doesn’t look like a superhero. But, in the event of a major catastrophe, it's people like Jim who will come to our rescue.

At one time, the best way to get information across the United States was by horse. But, a 180 years ago Morse Code changed everything.

"It did because that represented a giant leap in technology," says Talens.

It’s a series of dots and dashes that make letters. Which make words.

"It is just a translation of letters," says Talens.

"I started out as an amateur radio operator at the age of 13," explains Talens.

Jim Talens is one of the best Morse Code operators on the planet. He won an international contest for being able to contact more than 5,000 other operators in 48 hours. He did it without sleep.

"I was number one in the world."

When it comes to Morse Code he’s written the book. Today this old technology is primarily used for fun. But, in the event of a natural disaster or terrorist attack, Morse Code could still play a vital role connecting first responders with hospitals.

"And there are several thousand members scattered throughout the United States who conduct drills periodically," says Talens.

"In other words," says Talens, "You can get through under adverse conditions more readily with dots and dashes than you can with a voice."

And, like all superheroes, Jim has a secret weapon. He keeps it in his backyard.

"This tower is the top sections of a commercial tower. It’s 70 feet tall. It supports antennas that allow me to talk to anywhere in the world," explains Talens.

Of course, we want to be safe from terrorists and hackers. But, if something happens there are people like Jim Talens who are ready to fight back by going old school.

Not all superheroes wear capes. Some, just have a very fast finger and thumb.

There are dozens of Morse Code clubs scattered across the United States. Each member owns their own equipment and puts in the time to maintain their skills. They do all of it without any government intervention.

If you know about a person with a unique hobby or story, Scott Rensberger would love to share it with all our viewers. You can pass your story idea onto Scott via the WUSA9 Facebook page or on our Twitter account. You can also email the idea to newstips@wusa9.com.