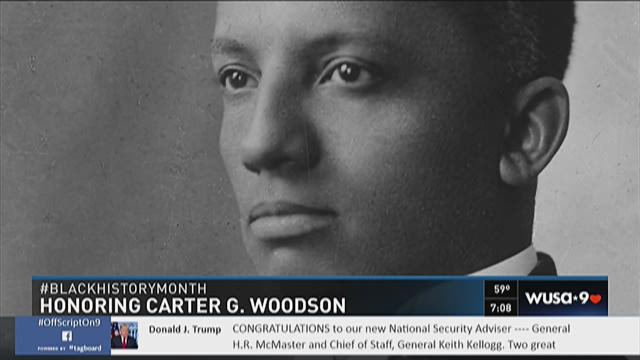 WASHINGTON (WUSA*9)--This Black History Month we look back at the life of Carter G. Woodson. He was the son of slaves, self-taught and didn't go to high school until he was about 20 years old. But somehow, despite these obstacles, he became one of the first African Americans to receive a Ph.D from Harvard. His dedication to preserving history was the spark for Black History Month.

Every February for the past 91 years we have celebrated Black History Month. It was the vision of Dr. Carter G. Woodson.

"And, he transformed how we think about the black past," says Dr. Daryl Scott, Ph.D, a professor of history at Howard University.

"If it wasn't for the work that Woodson had there would be no African American history and he pointed out that without history a race is nothing, says Margaret Miles a Park Ranger with the National Park Service.

Today, the National Park Service is restoring Woodson's house in Washington, DC where he lived for almost 30 years.

"He knew the task that he was going to take on and what it would take. He took a vow of chastity and of poverty, explains Miles.

Woodson spent his life writing history books. Hoping to educate us all about the contributions of black Americans.

"Look at the 54th regiment that was one of the most decorated civil war regiment they earned more medals of honor and valor but look our country took 100 years to publicly recognize those men," says Miles.

"If we believe the numbers, virtually every black male of age in the north fought in the civil war," says Dr. Scott.

"Often times there were historians and philosophers who said the Negro has no past. And the negro's have left no record. And, he made it his purpose in life to transform how black people saw themselves and how the world saw black people. Black people are so convinced that we've been excluded from history that we won't be satisfied until every black person who ever lived is included into the history. OK. That's how much we believe in history and how much we feel we've been left out of the story."

Carter G. Woodson died in his Shaw neighborhood house in 1950. He's buried just over the line in Maryland.

The Carter G. Woodson home will open to the public on Memorial Day.