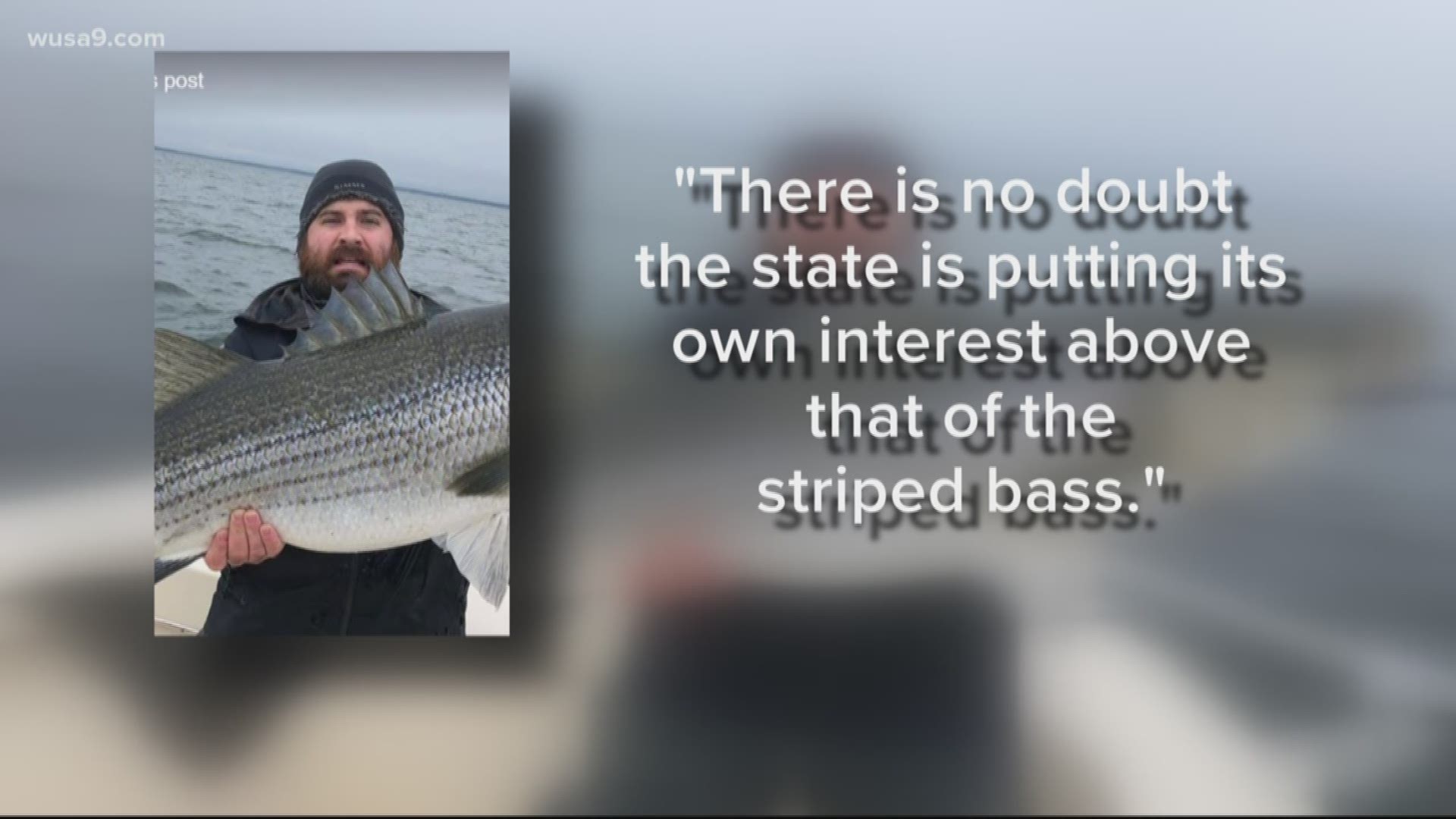 ANNAPOLIS, Md. — Anglers regard the spring season as the best opportunity to catch and keep the "Rockfish of a lifetime" trophy in the Chesapeake Bay.

But with the Bay's signature species facing an alarming decline, one charter captain says he'll insist his clients release the biggest fish in an effort to save the species, even though Maryland regulations allow anglers to keep one trophy per day.

"Throwing trophies back is not real popular around here," Lombardi said, after posting his personal conservation declaration on Facebook. "We need to make a drastic shift in culture here on the bay."

Giant rockfish over 35" are the "breeders" that arrive in springtime to spawn.

Under the current circumstances, killing them makes no sense, according to Lombardi, who charges clients as much as $750 per day for a trip on the Chesapeake.

"Just because it's legal doesn't make it right," Lombardi said.

In addition to throwing back trophies, Lombardi says he will limit clients to keeping one smaller fish per day during Maryland's later season, even though state regulations allow fishermen on paid charter trips to keep two per day.

He also said he will not allow clients to target smaller rockfish for catch-and-release sport fishing during the hottest periods of the summer, because the heat and low oxygen levels leave the fish badly stressed.

Nearly 40% of rockfish that are caught and released in such conditions die anyway, according to American Saltwater Guides.

Lombardi calls it a colossal waste that regulators should stop.

During the summer, Lombardi targets other fish species such as Spanish Mackerel, Red Drum, Cobia and Bluefish.

The Atlantic States Marine Fisheries Commission has demanded that all Atlantic states reduce the harvest of Rockfish by 18%.

The abundance of breeding females is at its lowest level since 1994, according to the most recent data from the National Oceanographic and Atmospheric Administration.

Overfishing and environmental stress are being blamed.

To meet the reduction target, Maryland's Department of Natural Resources has announced changes to its 2020 Rockfish regulations.

The conservation measures will include:

"Maryland’s management changes follow numerous meetings and discussions with stakeholders and a month-long public comment period, and were developed using the best available science and decades of experience," the department stated in its announcement.

Lombardi said the restrictions don't go far enough or target the wrong stakeholders for reductions.  He called them "an embarrassment" on Facebook.

For example, Lombardi predicts the new prohibition against targeting Rockfish for catch and release fishing between March 1 and May 1 will badly hurt fishing guides, even though the cooler water conditons make survival of the fish much more likely.

He said the stricter rules on his boat are likely to cost him business, but it will be better than having no business in the future if Rockfish populations do not rebound.

RELATED: Lead found in tap water at MD schools. Here's how to see if your kid's school is affected

RELATED: Talk about a booze kill: Proposed tariff could increase cost of your favorite wine