The Nationals are one and one in its three-game series so far against the Phillies, with a deciding rubber match on Sunday. 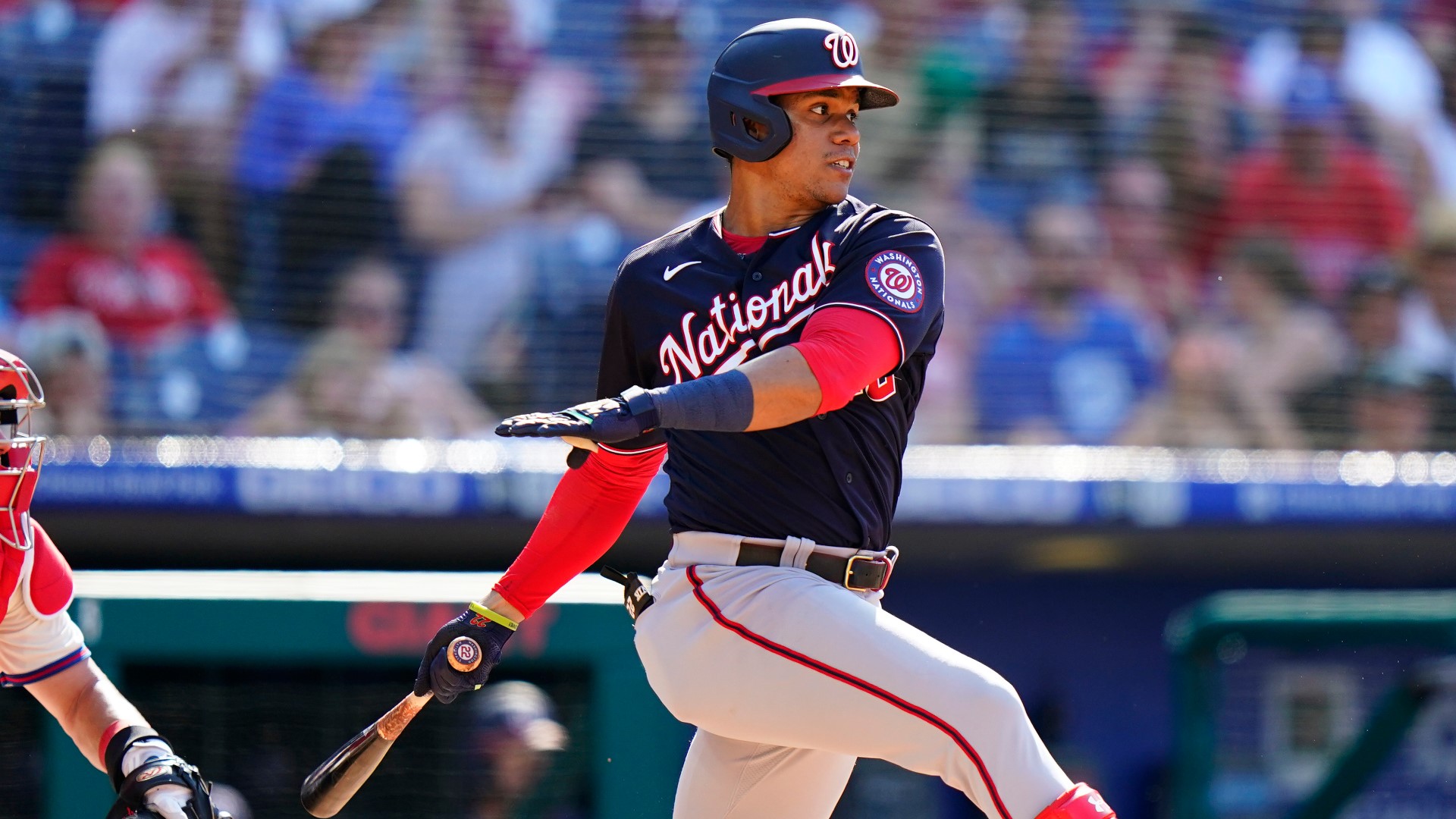 WASHINGTON — The Nationals have been battling back in its two recent series against the Braves and Phillies. It comes as only three wins separate last-place Washington and the first-place New York Mets.

The Nationals split a four-game series against Atlanta last week and is one and one in its three-game series so far against the Phillies, with a deciding rubber match Sunday.

Learn more about the series from Josh Neighbors of the Locked On Nationals podcast. Josh also discusses some popular trades, including the one that sent Bryce Harper from the Nationals to the Phillies.

Bryce Harper hit a run-scoring single that stopped an 0-for-18 skid in his return from the injured list, Andrew McCutchen hit a three-run homer and the Philadelphia Phillies beat the Washington Nationals 5-2 on Saturday.

Harper was in right field and hit third after missing 11 games with a left wrist injury.

He was hit by a pitch in the sixth, taking a Joe Ross slider off the top of his left foot, but remained in the game. Manager Joe Girardi said afterward that Harper might be a little sore on Sunday, but didn’t appear to be significantly hurt.

Harper was hurt on April 28 when a 97 mph fastball from St. Louis’ Genesis Cabrera hit him on the face and then the left wrist. He returned to the lineup after three days off but struggled.

“I’m ready to go,” he said. “When I step on the field, I try to bring passion into what I do every single day. I’m excited to get out there and grind with my guys.”

The Phillies were happy for his return, too.

“There’s a lot of different things he can do, and we’ve obviously missed that,” Girardi said. “And it’s great to have him back.”

Said McCutchen, “We all know what he can do. It’s good to have him back. It’s going to strengthen the lineup.”

Washington’s Josh Harrison was hit by pitches twice, by starter Spencer Howard and by Ranger Suárez (1-0), who won by pitching three hitless innings.

Rhys Hoskins had an RBI for Philadelphia, which won for just the second time in the last six games.

Josh Bell went deep for the Nationals. Washington’s run differential dropped to minus-25.

“We have to keep grinding,” manager Dave Martinez said. “Sometimes I feel like we’re really close to busting out of it. Today just wasn’t that day.”

With Washington ahead 1-0 in the fourth, Bell booted Jean Segura’s one-out grounder for an error. After Harper, Hoskins blooped an RBI single for a 12-game hitting streak and McCutchen hit an 84 mph slider to left for his 10th homer.

Bell homered against José Alvarado leading off the eighth. The Nationals put two on with no outs, but Alex Avila lined out, Victor Robles flied and, pinch-hitter Ryan Zimmerman struck out.

“We had the right matchups; it just didn’t happen,” Martinez said.

Harper singled off Sam Clay in the eighth.

Washington scored in the third when Juan Soto’s grounder that went through Segura’s legs at second base and allowed Trea Turner to score from third,

Howard allowed an unearned run and one hit in 2 1/3 innings.

Soto was booed one day after hitting the go-ahead homer in the sixth inning of Friday’s 2-1 Nationals victory over Philadelphia. Soto stared down Phillies pitcher Zack Wheeler after the hit.

Travis Jankowski also was booed by Phillies fans when he replaced McCutchen in the field in the seventh as part of a double-switch. Jankowski made a baserunning mistake in the ninth Friday when he was tagged out between second and third for the first out of the inning.

Nationals; C Yan Gomes (hamstring) was sidelined for the third straight game and is day to day. ... RHP Erick Fedde (COVID-19 injured list) allowed two runs and five hits in 5 1/3 innings on Saturday in a rehab start at High-A Wilmington. Fedde threw 48 of 72 pitches for strikes.

Phillies: SS Didi Gregorius (right elbow) took batting practice prior. He has been out since May 12.

RHP Vince Velasquez (2-1, 4.08) starts for Philadelphia in the series finale on Sunday. The Nationals will use a bullpen-by-committee, but Martinez didn’t name an opener following Saturday’s game.

RELATED: 3 brothers served our country, only 1 came home. How the surviving brother wants them to be remembered