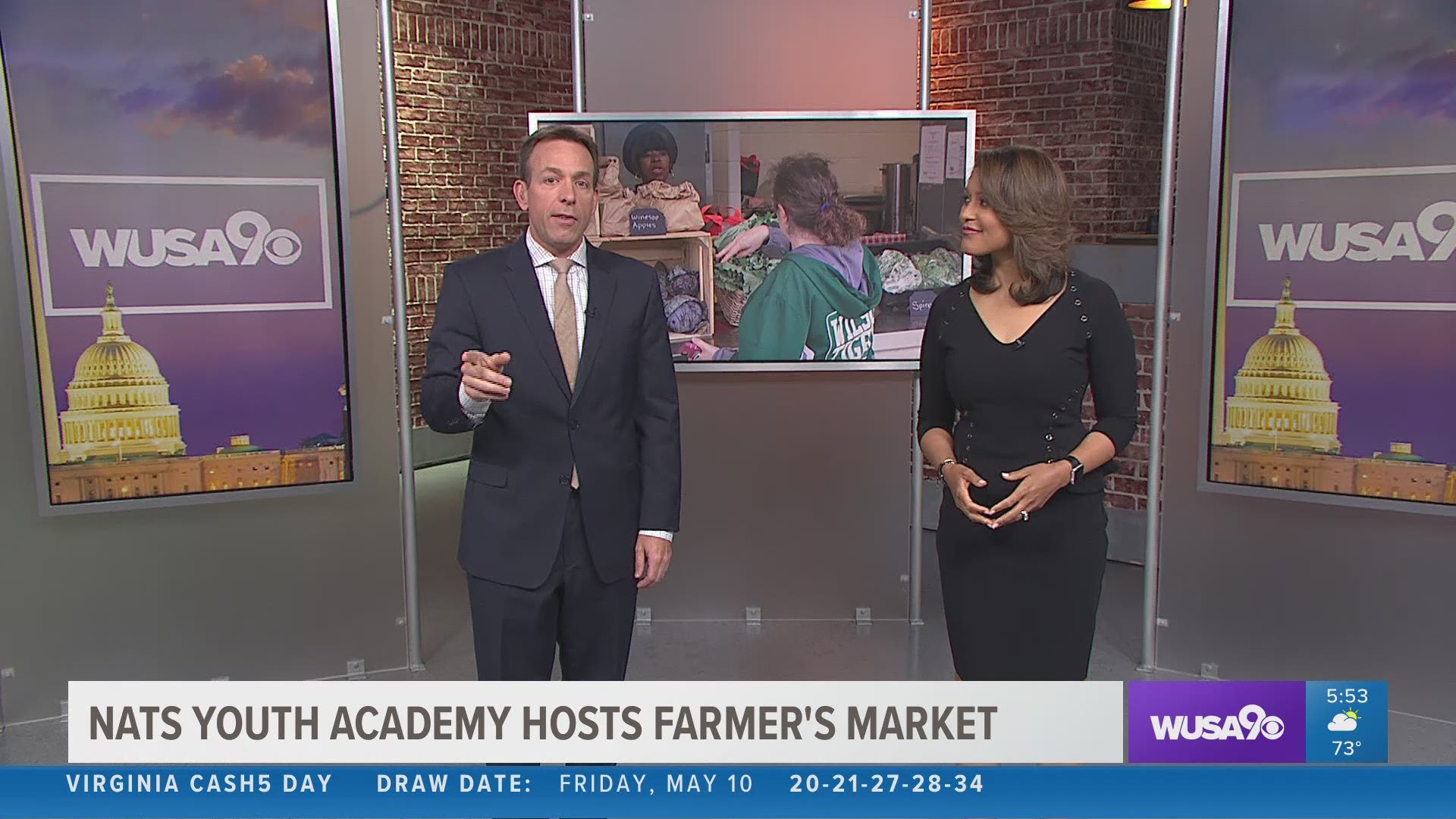 WASHINGTON -- Let's look at some numbers that don't have anything to do with runs, hits or errors.

There are only two full-service supermarkets in Wards 7 and 8 in Washington DC so buying fresh produce is no easy task.

That's where the Nationals, the YMCA and a DC area CSA called 4P Foods have stepped in. They've partnered to provide organic, healthy foods in the only year round Farmers Market in Ward 7. It's held weekly at the Nationals Youth Baseball Academy.

Hortense Brent is the market manager at the Field of Greens. She got the job after taking cooking classes at the Academy in a bid to get a handle on her health.

"I had two heart attacks found that I was diabetic," says Hortense. "They put me on insulin twice a day. I had lupus, high blood pressure. It was a whole range of things."

Now the Vegetable Lady, as she's called, says she doesn't take insulin at all and eats a plant-based diet.

Nearly 30% of her neighbors in Wards 7 and 8 live in poverty. She wants them to eat better, too.

Serenity Rain and her children do. They are regulars at the market. Rain is a nutritionist at DC's Anne Beers elementary school and her son, Marley attends programs at the Academy.

"It's amazing to be able to have access to fresh organic produce year round, especially in a food desert," says Serenity. "The grocery stores here provide limited amount of fresh vegetables and they're coming from different places. You don't know where they're coming from so being able to not only have access to their fresh produce but the kids being a part of it, from seeds to feed, is amazing, especially in Ward 7. We need this."

Maya Walker, the health and nutrition manager at the Academy, is proud of the market and the nearby garden that grows produce for cooking classes.

"There are a lot of different health concerns within the community that our community is having issues with combating, and just encouraging nutritious produce and supplementing that with additional cooking classes will be extremely beneficial," says Walker. "So we would love to have more partners and more residents to engage with us so that we can use them as expansion sites and other options for delivery of fresh produce around the community."

Nationals third baseman Anthony Rendon is so passionate about what's happening at the Academy, he and his wife gave $150,000 of their own money.

With matching funds from individuals and others in the community, that amount has grown to $322,000. All used to make a difference in the neighborhood.

Rain says having the Nationals involved, "makes it even more monumental, like 'oh this is really important. Let's put some force behind this.' The residents of Ward 7 matter. The kids matter here. So let's make this happen."

4P Foods shares information from Kaiser Permanente that says 1 out of 4 health care dollars are spent on treating diabetes and obesity.

This program aims to bring down those numbers by getting people healthy on the front end with fresh produce instead of on the back end with healthcare treatment.