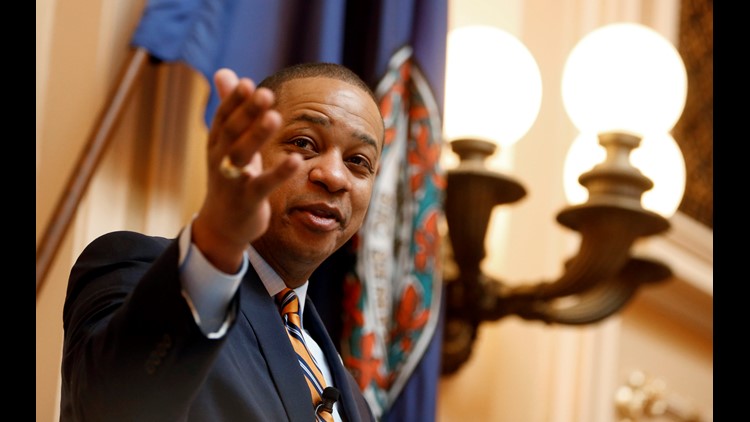 RICHMOND, Va. — In a stunning move days after state lawmakers openly discussed potential impeachment proceedings against Lt. Gov. Justin Fairfax, Democratic members of the Virginia House of Delegates backed away from the drastic option - for the time being.

Fairfax (D) was once seen as the heir apparent to embattled Virginia Gov. Ralph Northam, after the governor became embroiled in controversy surrounding a racist yearbook photo and his admitted use of blackface.

But Fairfax's fortunes faded quickly, after two women accused the ambitious politician of sexual misconduct. One allegation involves an accusation of sexual assault at the Democratic National Convention in 2004 -  the other, an allegation of rape at Duke University in 2000.

Fairfax vehemently denies both allegations, stating the encounters were consensual and constitute a coordinated smear campaign.

"I will clear my good name and I have nothing to hide," Fairfax said. "I have passed two full, field background checks by the FBI and run for office in two highly contested elections with nothing like this being raised before... I will not resign."

The women, Meredith Watson and Dr. Vanessa Tyson, both expressed willingness to publicly testify during a potential impeachment hearing in Richmond against the lieutenant governor.

But in a strong reversal, Democratic lawmakers deferred to law enforcement authorities to carry out future investigations of Fairfax, sparing Virginia its first impeachment procedure involving a top elected official.

"Ms. Watson & Dr. Tyson are courageous in coming forward to tell their stories," Virginia House Democrats said in a statement Tuesday. "We respect all survivors and believe they should be fully heard. The allegations they have made against Lt. Gov. Fairfax are criminal in nature and we are treating them with the seriousness they deserve."

"We believe that the law enforcement investigation should proceed unencumbered and outside of the political arena."

While impeachment seemed to be eliminated in the near-term as a way to investigate the claims, Democrats in Richmond privately stopped short of taking impeachment off the table for good.

The mechanism could remain in place if police in North Carolina or Massachusetts deliver corroborating details to substantiate the claims levied by Watson and Tyson.

Del. Patrick Hope (D-Arlington) first announced on Feb. 8 he would introduce articles of impeachment if the lieutenant governor did not step down. After a draft of the articles circulated among lawmakers, members of the Virginia Legislative Black Caucus said the move was too extreme, without providing Fairfax enough time to defend himself.

"There has been an enormous amount of sincere and thoughtful feedback which has led to additional conversations that need to take place before anything is filed," Hope said on Twitter.

"We owe it to all parties involved — especially the victims — to make sure that we have thought through every option the General Assembly has. That’s what these conversations are for — so we can build more consensus on a path forward."

In an editorial for the Washington Post, Farifax's second accuser criticized Virginia's General Assembly for inaction.

"Despite the professed belief of numerous elected officials in Virginia and elsewhere that Vanessa Tyson, who says that Fairfax sexually assaulted her in 2004, and I have brought forward credible allegations, the Virginia General Assembly has not taken the simple and responsible step of arranging the thorough public hearing that we have sought," Meredith Watson wrote.

"This is how the culture of sexual assault, harassment and the disempowerment of women persists."