VERIFY: Why was this Virginia senator working without a mask behind a plexiglass wall?

A Virginia politician is making national headlines after an AP photo captured on Feb. 2 went viral. 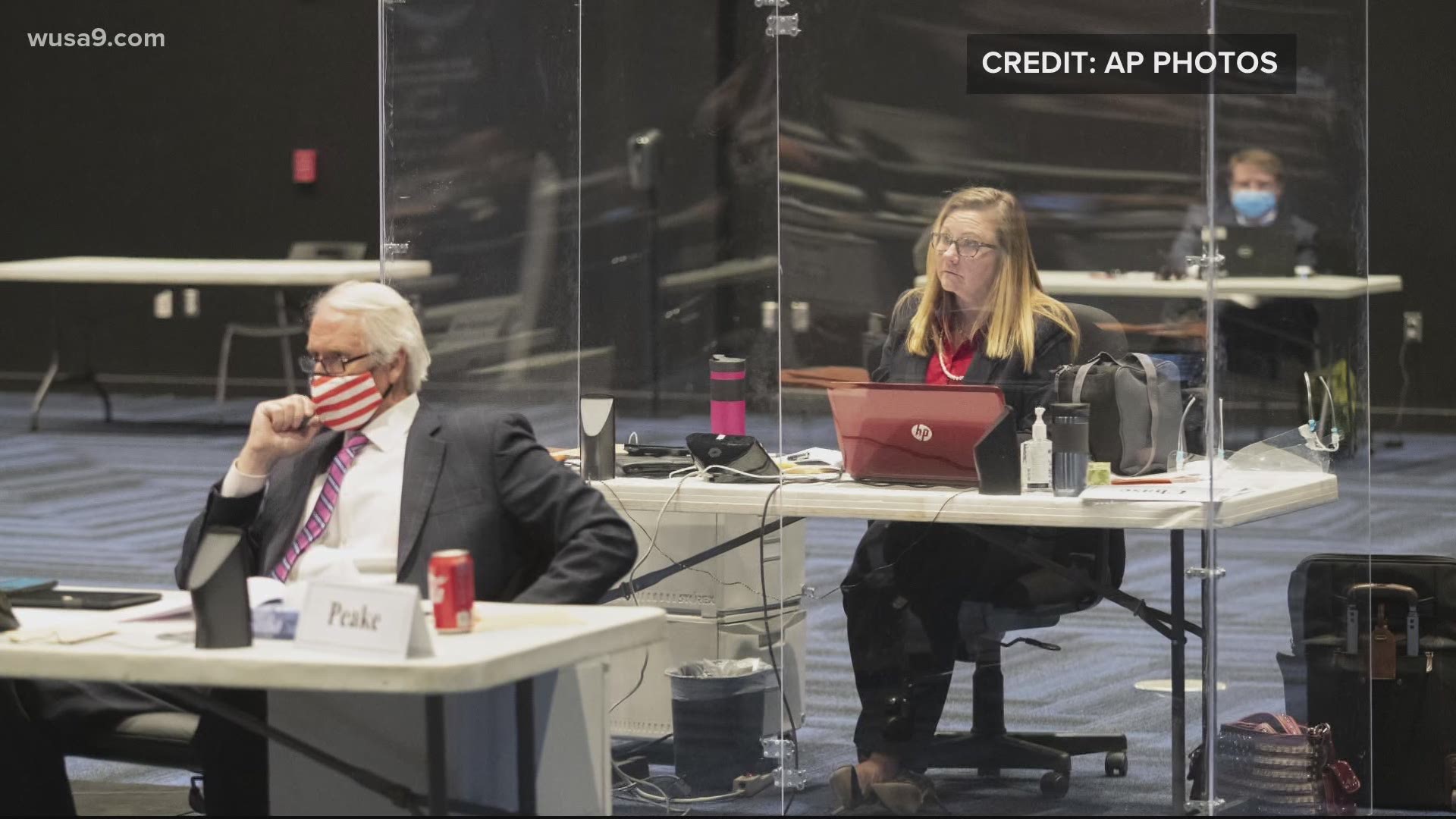 Why is Virginia State Senator Amanda Chase sitting behind a plexiglass partition? What is the context behind this viral photo?

According to Senator Chase and the Clerk of the Senate, Chase received accommodation for a medical condition that precludes her from wearing a mask. The photo was captured on February 2, 2021 by freelance photographer Ryan M Kelly, but portrays a situation that's been going on for months. The partitions were installed before the August special session in 2020.

A Virginia politician is making national headlines after a photo of her working at her desk surrounded by a plexiglass cubicle went viral.

Amanda Chase, Virginia state senator and Trump loyalist who refuses to wear a mask, is forced to sit in a plexiglass box. She's a leading GOP contender for governor. https://t.co/6rHismT3ws pic.twitter.com/hf3Di9uFKP

The picture was featured in a February 19 New York Times article under the headline "The Virginia G.O.P. Voted on Its Future. The Losers Reject the Results."

That same day, the photo was referenced during Jimmy Kimmel Live.

"In Virginia a state senator is getting a lot of attention for her strong opposition to masks," Kimmel said. "...and since she won't wear the mask they put her in a plexiglass box at the meetings."

So let’s get the context for this photo and Verify why the senator was placed behind plexiglass in the first place.

First up, the photo is real. It was snapped by freelance photographer Ryan M. Kelly for the Associated Press on February 2, 2021.

Kelly told our researchers he was there profiling Chase's run for governor.

Credit: AP
In this Feb. 2, 2021, photo, Virginia Sen. Amanda Chase and Republican gubernatorial candidate, speaks from her desk at the Science Museum of Virginia in Richmond, Va. The national Republican Party is at war with itself, struggling to reconcile a bitter divide between former President Donald Trump’s fierce loyalists and those who want Trumpism purged from their party. Chase is a polarizing state senator who seems to have won the hearts and minds of the Trump faithful with her fiercely anti-establishment, pro-gun positions and her embrace of the false notion that Trump is the legitimate winner of the November election. (AP Photo/Ryan M. Kelly)

"I never would have expected this," Kelly said. "This to me felt very routine, you know, it was a scene that I'd seen before, but I guess when it's exposed to a new audience that sort of does it."

The photo is getting some local buzz on Reddit in Virginia-themed threads known as subreddits.

According to recordings of Virginia Senate sessions, Chase isn’t the only politician surrounded by plexiglass; so is Senator George Barker, who represents Fairfax and Prince William counties.

Credit: Senate of Virginia/Committee and Floor Streaming
Senator Barker can be seen in the background wearing a mask and working within a plexiglass cubicle.

Our researchers also contacted the Clerk of the Senate, Susan Clarke Schaar, to ask about the partitions.

She said both senators have health issues that warrant the shields, which were installed for the August 2020 special session.

"The decision was made by me after conferring with the Health Dept. and CDC guidelines," Schaar said in an email.

In a virtual interview, Chase told our researchers the partition was accommodation for a medical condition.

“I physically cannot wear a mask, I have a doctor's note, which is why the senate clerk's office, they allow me not to wear a mask and have put up a Plexiglas barrier," Chase said.

Credit: Senate of Virginia/ Committee and Floor Streaming
Senator Chase speaks during the senate session on February 2, 2021, the same day the photo, which has gone viral, was captured

Some have nicknamed Chase, "Trump in heels," and she has her own moniker for the area around her desk.

"That is my wall of freedom, because in that area I don't have to wear a mask, I can freely breathe," she said.

To those online asking Chase to prove she has a condition she offered this response: “I don’t need to prove anything to anybody else. I don’t think we would turn to someone that’s sitting in a wheelchair and say prove that you need to be in that wheelchair."