VERIFY: Yes, the White House has delivered free food boxes to millions during the pandemic

The USDA spent a total of $4 billion on the Farmers to Families Food Box Program which partners farmers with distributors and food banks. Here's a look. 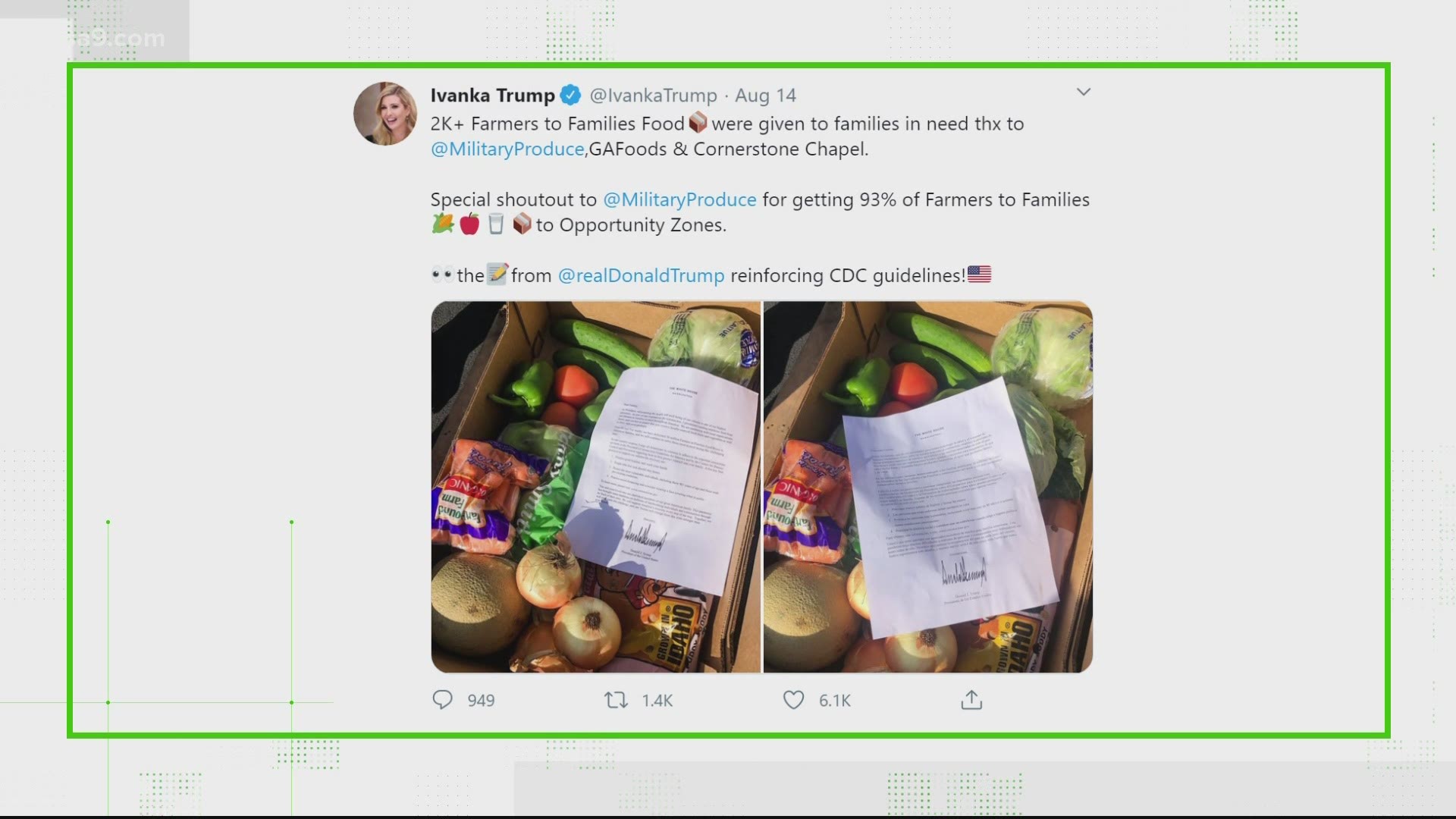 Did the White House organize a program to send boxes of food to families in need of pandemic assistance?

Yes, the President directed the USDA to create a program to support farmers and ranchers and the food supply chain amid the coronavirus pandemic.

What resulted was a two-part program that allocated $3 billion towards purchasing fresh produce, dairy and meat from local distributors for those in need. An additional $1 billion was authorized on August 25, 2020.

The program is called the Farmers to Families Food Box Program and according to the USDA, as of September 29, more than 100 million food boxes have been distributed.

USDA to Purchase Up to $3 Billion in Agricultural Commodities, Issue Solicitations for Interested Participants -- April 19, 2020

People online are sharing all kinds of photos of food boxes with what people claim include letters from the President.

Jackie Hah
Have you all gotten your government food box from Trump ?

Trump gave us a box of food supplies pic.twitter.com/UY28E8WoYY

Thank You Mr. President Donald J. Trump For Our Wonderful Food Box!!! ❤️
We Had Some Of It For Dinner Tonight...😋😋😋#Thankful & #Blessed #DonaldJTrump pic.twitter.com/1C5406J5FV

So let’s verify, is the White House delivering boxes of food to families?

Our sources are the President and members of the Trump Administration and the U.S. Department of Agriculture.

Our researchers were able to trace the boxes to a USDA program announced back in April as part of the Families First Coronavirus Response Act.

"USDA will partner with regional and local distributors, whose workforce has been significantly impacted by the closure of many restaurants, hotels, and other food service entities, to purchase $3 billion in fresh produce, dairy, and meat" the USDA wrote in an April 17 press release.

The President spoke about the $19 billion dollar program on August 24 during a visit to a facility in North Carolina. About $3 billion has was set aside for the boxes, an additional $1 billion was later added in August.

"That’s why we launched the Farmers to Families Food Box program. Through this program, the Department of Agriculture is purchasing food from farmers, then local distributors pack and deliver the boxes. And families in need get it, and they get to eat very well," the President said in North Carolina.

"Seventy million box of fresh produce, milk, dairy delivered from our local family farms to those who are vulnerable across the country, while, at the exact same time, saving countless jobs in terms of the distribution network…," Ivanka Trump said during the August 24th speech.

In August, Ivanka tweeted a photo of a food box, complete with a letter with the President’s signature.

2K+ Farmers to Families Food📦were given to families in need thx to @MilitaryProduce,GAFoods & Cornerstone Chapel.

Special shoutout to @MilitaryProduce for getting 93% of Farmers to Families🌽🍎🥛📦to Opportunity Zones.

So we can Verify, yes, the USDA at the direction of the President, is delivering boxes of food to families during the pandemic.

Using the information on the USDA website, our Verify researchers looked to see how the program is benefiting Greater Washington, D.C. companies.

Credit: AP
A USDA poster depicting a "Farmers to Families Food Box" program is displayed next to workers as they pack boxes of produce at Coastal Sunbelt Produce, Friday, May 15, 2020, in Laurel, Md. (AP Photo/Andrew Harnik)

Some of the local contractors that participated in the program include, Costal Sunbelt Produce, DeLune Corp, Military Produce Group and Teddy Bear Fresh Produce. During the first and second round of the program, more than $174.5 million was spent on contracting with Mid-Atlantic region suppliers, according to the USDA.

A full list of round three approved vendor contracts are available by county here. Three contracts were awarded to Virginia vendors, and four for Maryland.