Some people online are accusing Congresswoman Ocasio-Cortez of deleting a tweet about COVID restrictions on businesses. Verify found no evidence it ever existed. 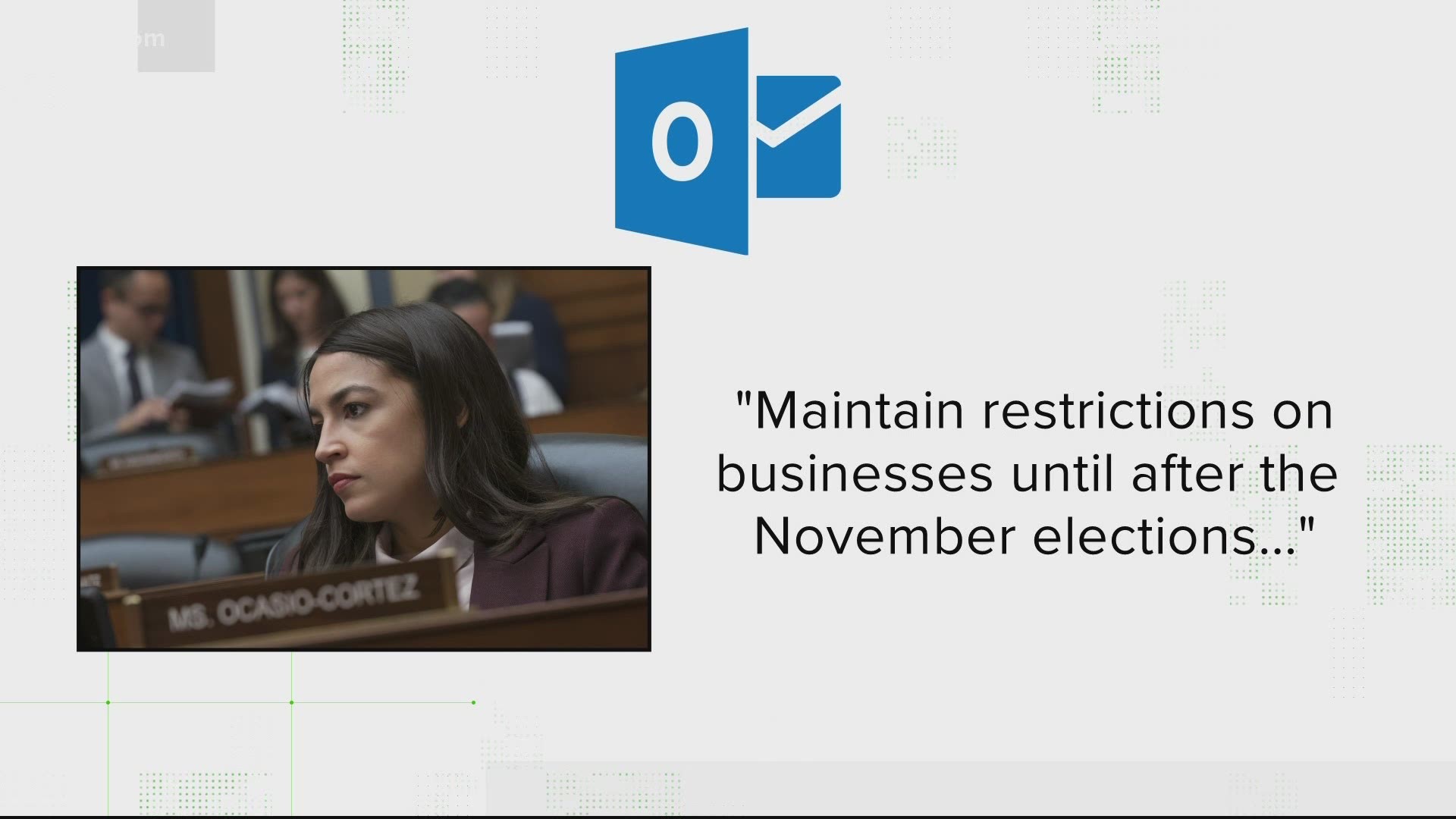 Did Rep. Alexandra Ocasio-Cortez delete a tweet where she said that "governors should maintain restrictions on businesses until after the November elections?"

The Verify team found no evidence that the congresswoman wrote and deleted this tweet. She denies it, and public archives show no such tweet ever existed.

A viewer emailed the Verify team asking whether an alleged tweet from Rep. Alexandra Ocasio-Cortez, that was shared on Facebook, saying governors should maintain restrictions on businesses until after the November election is real.

Many people shared this claim on social media.

So we're verifying whether AOC posted on Facebook that governors should maintain restrictions on businesses until after the November election.

In it, she allegedly writes, "It's vital that Governors maintain restrictions on businesses until after the November Elections because economic recovery will help Trump be re-elected."

We started by reaching out to the Congresswoman’s office. A spokesperson said that AOC did not write this.

In fact, the congresswoman took to twitter to address the rumor, writing in part: “I usually don’t tweet to correct fake posts about me...but needless to say the alleged 'deleted' reopening tweet people are saying I wrote is a photoshopped fake..."

Our Verify researchers used a website called The Internet Archive Wayback Machine, which captures snapshots of websites on a regular basis to create a "digital library."

WUSA9 looked at all snapshots taken on May 20 and May 21 and could not find the alleged tweet.

Next, we looked at a database, called 'Politwhoops" and run by ProPublica, that tracks deleted tweets from public officials

We looked at deleted tweets from both her personal and professional twitter pages and could not find any mention of this alleged tweet.

So we can Verify that our researchers found no evidence that AOC wrote and deleted this tweet. She denies it and public archives show no such tweet ever existed.

RELATED: VERIFY: No, JetBlue Airways is not offering free tickets