VERIFY: Is D.C. really sold out of surgical masks, amid Coronavirus scare?

Amid fears of the Coronavirus, surgical masks are flying off pharmacy shelves. This has prompted some to claim that they're completely sold out. But are they? 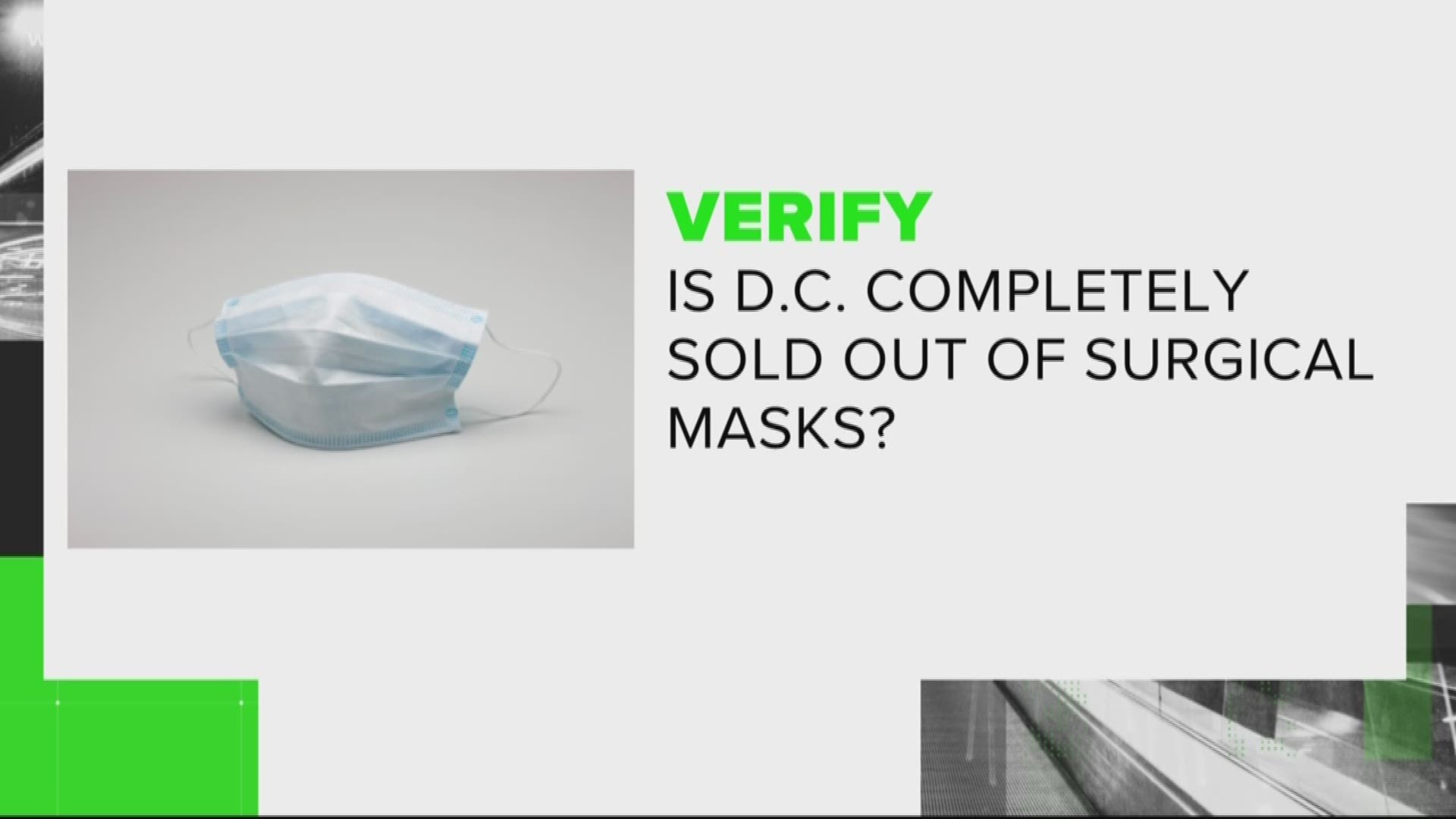 Is D.C. completely sold out of surgical masks, amid Coronavirus scare?

No. The Verify team got in touch with more than a dozen pharmacies across the district, and found that these masks are still available. However high demand has caused shortages at many stores.

Photos of empty shelves have filled social media, along with claims that surgical-style masks have completely sold out.

"Went to three different drug stores in DC today," wrote one user. "looking for surgical masks... And every single one of them was fresh out..."

Another user took it one step further.

"Masks seem to be all sold out in DC," he wrote.

To find out if this is true, The Verify Team, spent the day reaching out to pharmacies in the D.C. region. Of the ten independent pharmacies that answered our calls, eight of them reported that they were out of masks. The other two pharmacies still had masks available.

Larger companies like Walgreens reported "greater demand," due to the Coronavirus scare. CVS said that this spike in demand is causing "shortages at certain stores."

The National Association of Chain Drug Stores, which represents about 80 chains and 40,000 pharmacies said they were seeing this jump in demand across the country.

"Some stores are sold out for now," a spokesperson said. "Some are running low. But our members are working closely with suppliers to manage demand."

Below is a response from all the pharmacies, and national advocacy groups, reached by The Verify Team:

SOLD OUT; Reported that people were not coming in for them at a higher level.

SOLD OUT; Reported that someone came into their store looking for surgical masks on Monday, after looking all over town. They reported that they sold their last one on Monday. They said they were unable to get masks from their supplier.

SOLD OUT; Had a family come on Monday looking to buy two boxes. They bought the last two boxes. They just re-ordered more masks, and expect to receive them by end of day Tuesday.

SOLD OUT; Reported that they have been sold out for six days. They said that the vendor will send more once they get more in stock.

SOLD OUT; Reported that people are calling, and coming in asking about surgical masks. Reported that they are having re-ordering issues from their supplier.

HAVE IN STOCK; Reported that they have masks in stock.

HAVE IN STOCK;  Reported that they have seen an uptick at this location.

SOLD OUT; Reported an increase in people coming in for masks, and calling. Reported that their wholesaler is sold out.

RELATED: George Mason University confirms a student is being tested for new strain of coronavirus

RELATED: US confirms 5 cases of Wuhan coronavirus, 110 people 'under investigation'