Some online are spreading a conspiracy that the AAP is hiding the fact that it's "funded by Pfizer" and therefore pushing vaccines. Here's the context to that claim. 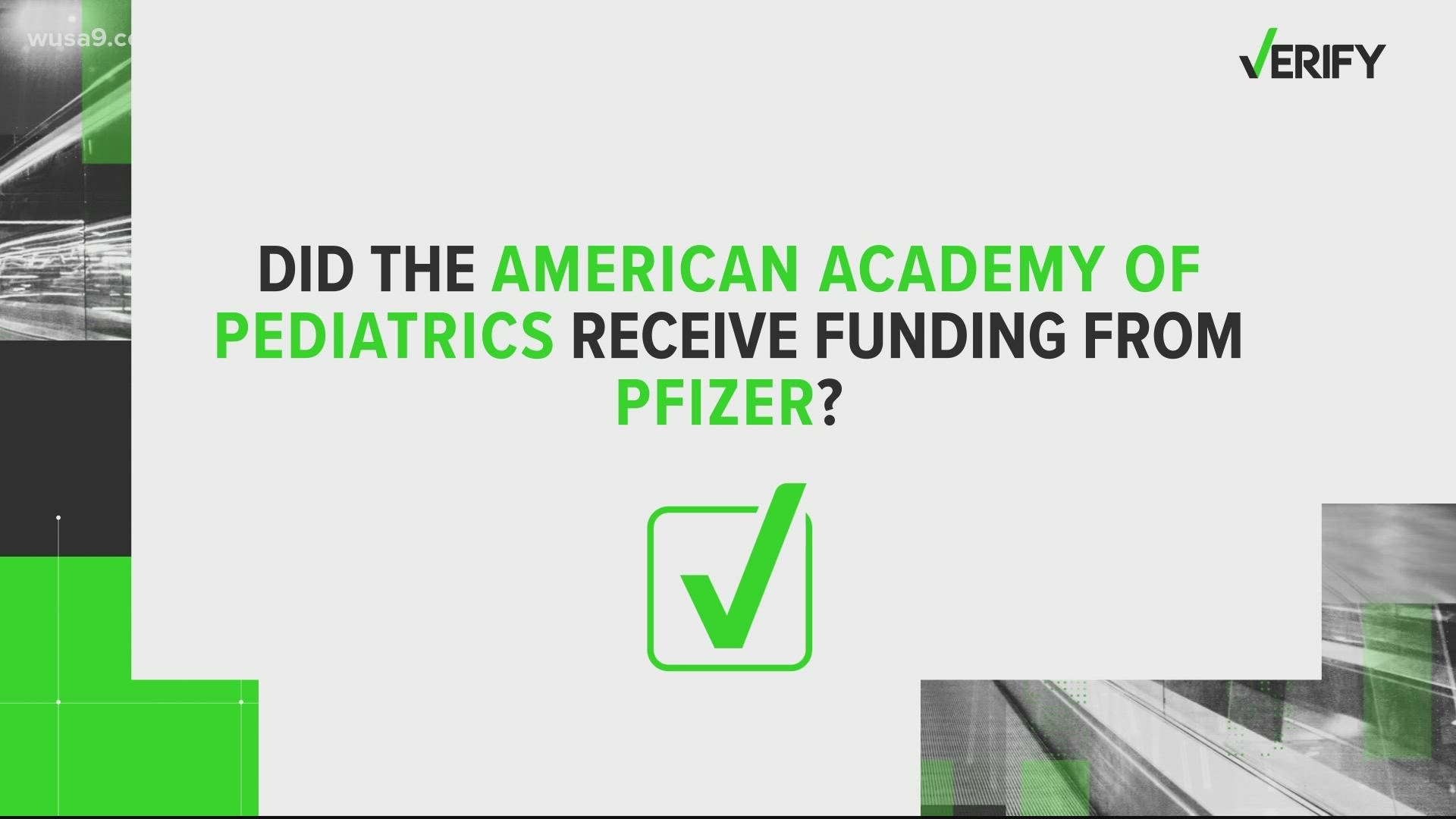 WASHINGTON — On the Verify team, we know that just because a social media post is shared thousands of times, that doesn’t necessarily mean the info is legit.

Some people have posted what appear to be screenshots of the American Academy of Pediatrics website.

In one photo, you’ll see under “our supporters,” they list the drug manufacturer Pfizer. They claim that a few days later the American Academy of Pediatrics pulled any mention of the company from its website.

Some are saying it looks fishy, and that the connection to Pfizer was removed to hide a secret relationship. But the Verify team exists to cut through the internet clutter and get to the facts; so let's do just that.

The American Academy of Pediatrics wants all kids masked until vaccinated?!?

Let's go to their website and see who the biggest donor is.... pic.twitter.com/oAWHrF1fgt

Has the American Academy of Pediatrics received funding from Pfizer? Are these screengrabs real?

The American Academy of Pediatrics has previously received funding from Pfizer. In 2017, they received $150,000 to support their Community Access to Child Health (CATCH) program. The projects funded with that money ended on June 30, 2021. The screengrabs are real.

An AAP spokesperson verified, yes, AAP received $150,000 from Pfizer in 2017. That was for a micro-grant program called "CATCH." Those grants help pediatricians implement community-based healthcare programs for children.

"Pfizer provided funding for the CATCH program in 2017, with some funded activities continuing into the most recent fiscal year, which ended June 30," an AAP spokesperson said. "The page was updated then to reflect that they were no longer a sponsor of this program, as is customary for all of our grant-supported work."

The statement aligns with what we found on the Internet Archive Wayback Machine; yes, those screenshots are real.

RELATED: VERIFY: Yes, kids should get the COVID-19 vaccine

Pfizer was listed as a sponsor on their website on July 21 and no longer listed on July 24, according to the Wayback Machine.

So yes, we can Verify AAP did get funding from Pfizer for one of its grant programs, and the photos are real.

On APP's website, they list their corporate and organizational partners, most of whom are drug and nutrition companies.

When our researchers asked AAP how much influence corporate sponsors and donors have on AAP policies and decision, they said zero.

"Corporate donors and sponsors have no influence whatsoever on AAP’s policies and decisions," an AAP spokesperson said.