VERIFY: No, the polar vortex this year did not wipe out 95% of stink bug population

The Verify team got the facts on a report that recently claimed the polar vortex may have killed off 95 percent of the stink bug population. 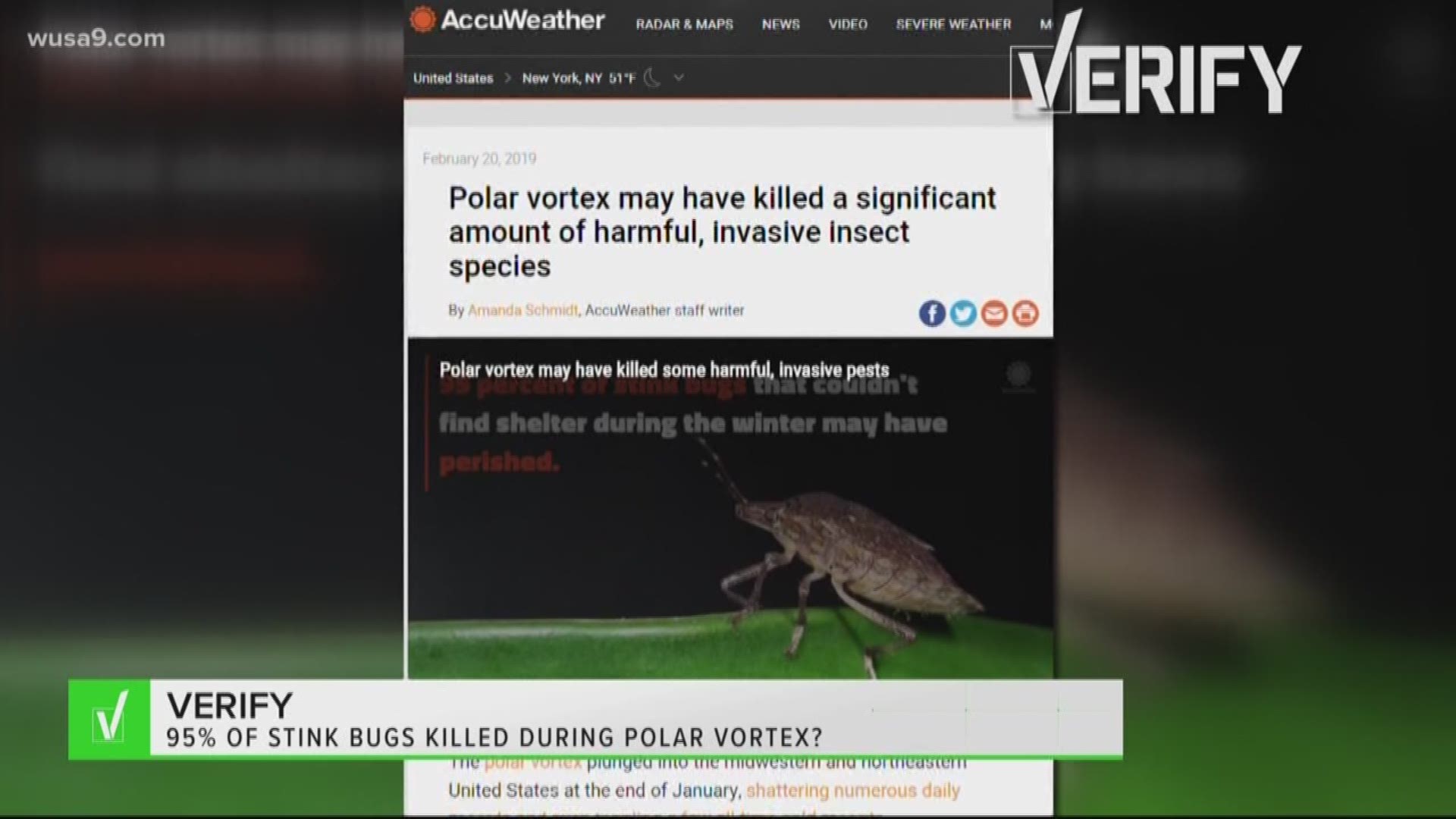 WASHINGTON — Our Verify team separates fact from fiction from the things you see circulating online. Remember, just because something is shared the internet, doesn't mean always mean it's true.

Earlier this week, an article circulated on social media that the polar vortex this year may have killed off 95 percent of stink bugs, according to the National Pest Management Association. It even appeared on the WUSA9 website, but not so fast!

Our researchers traced where the report came from which was a 2014 the research experiment from Virginia Tech based off of an observation in which 2,600 stink bugs were placed in a bucket when temperatures dropped below 5 degrees Blacksburg, Virginia.

Turns out the article referenced a 2014 research experiment from Virginia Tech where over 2,000 stink bugs were placed outside in temperatures below 5 degrees in Blacksburg, Virginia, 95 percent of them dying.

But the lead entomologist of that experiment at Virginia Tech, Thomas Kuhar told Verify researchers,they've done no new experiment on stink bugs since then.

The National Pest Management Association has since clarified the article to show the February 20, 2014 in which the Virginia Tech stink bug observation comes from.

We then talked to an Entomology Professor, Michael Raupp at the University of Maryland who said it's possible the stink bugs survival rate could decrease with sub zero temperatures from the 2019 polar vortex.

"Scientists have determined the super cooling point for stink bugs. It is about 6 degrees Fahrenheit. This means that when temperatures dip below this point, lethal ice crystals form in the cells of the bugs," Raupp said. "So, yes many areas went to single digits or below and this could result in high levels of mortality..but here is the catch. This is for stink bugs in UNPROTECTED locations. The stink bugs in people's attics where temps did not hit 6 will be fine."

He continued to say, "There is no one thing that has had the largest impact on the demise of stink bugs in our region in recent years. It is a combination of weather related factors like the polar vortexes and high summer temperatures and a whole series of natural enemies - predators, parasitic insects, and diseases working in concert to reduce populations of stink bugs in our region."

So we can verify the 2019 polar vortex did not wipe out 95 percent of stink bug population, the article's original claim was outdated and misleading.