His name is Ichiro, the Dino. He has an Instagram account. And his purpose is to link lives, 72 million years apart. 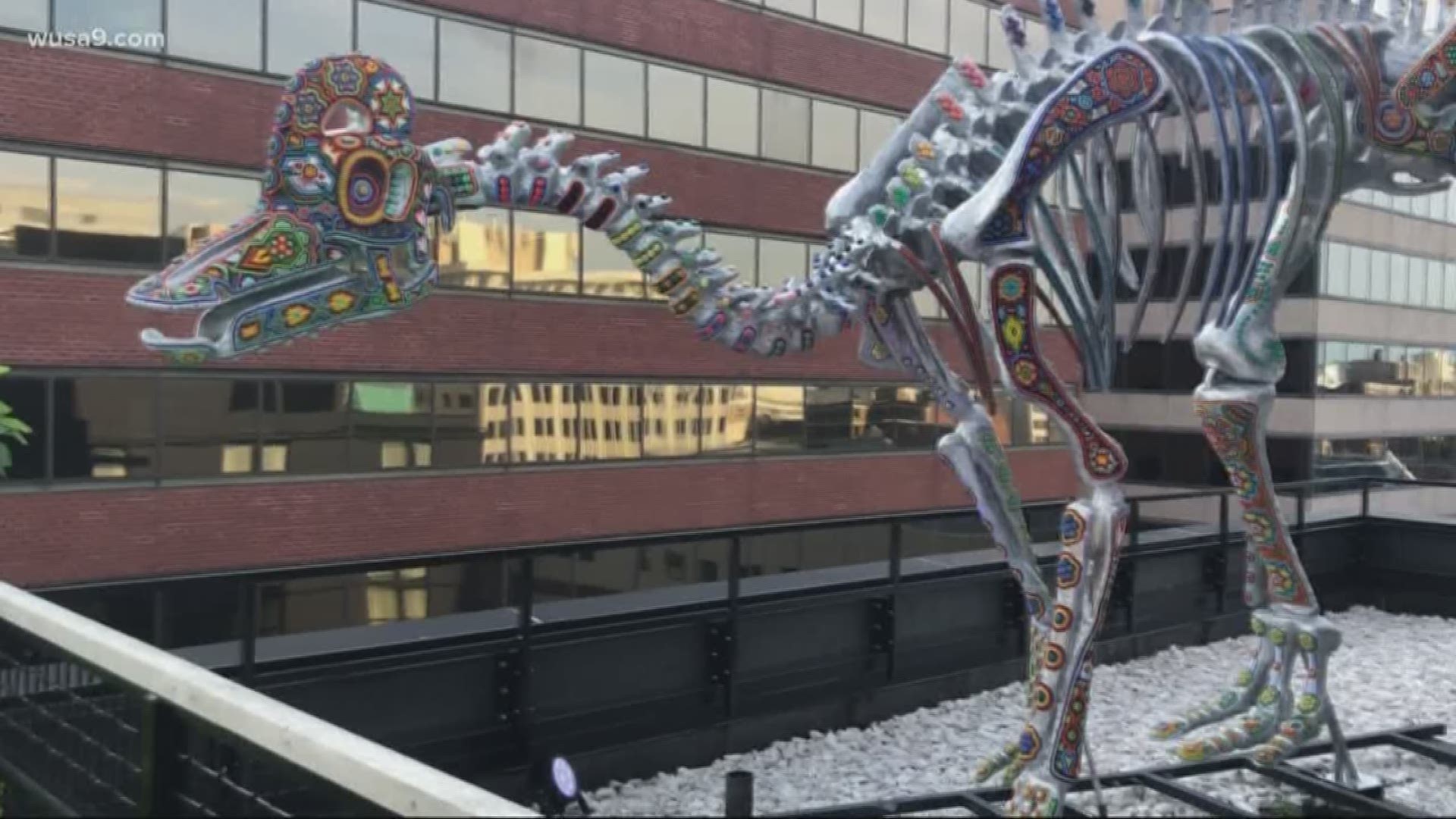 WASHINGTON – In a city full of political animals, there’s a new one from Mexico, by way of Burning Man, peering into a cocktail party on an 11th floor roof deck.

The head of a herbivore is just barely visible when you walk past the Washington Post’s headquarters on K Street, towards the Eaton DC.

It’s a hotel that attracts a “woke Washington” clientele, with a summer season now underway at the rooftop bar.

The hotel also managed to attract an artistic addition – a 30-ft. dinosaur skeleton, originally built for Burning Man, watching Washingtonians as they congregate for cocktails.

His name is Ichiro, the Dino.

Ichiro has an Instagram account, but his raison d'être was geared less toward likes and more towards time – an artistic purpose linking lives 72 million years apart.

The sculpture by artist Marianela Fuentes is a skeletal replica of the “sailed forehead” dinosaur known as a Velafrons. But his bones are covered with an array of color, inspired by the designs of Mexico’s ancient Huichol tribe.

Fuentes joined the paleontologists who found the fossils on Huichol land, inspiring the artist to create as she describes it, “an altar to ancient times.”

“This is a beautiful piece, I want everybody to see,” Fuentes said in an interview Friday. “I feel honored because I never thought this was going to happen in D.C.”

The kick starter website for the sculpture describes the work as a piece of color and overall composition allowing the viewer to “reflect on life, time and the profound changes that have taken place in order to give us the opportunity to be here at this very moment.”

After Ichiro made his debut at Burning Man, Fuentes discussed shipping the sculpture to Washington for “Catharsis on the Mall,” the capital’s version of the iconic art festival.

Filmmaker and Native American activist Sebi Medina-Tayac saw Ichiro displayed on the National Mall earlier this month, and eventually found the sculpture a home at the Eaton.

“Each leg had to be brought up the stairs, 11 floors,” Medina-Tayac said in an interview. “People have a lot of questions, but the dinosaur speaks for itself. It's a humongous, beautiful, piece of art.”

Ichiro is illuminated at night – an electric shade of purple – visible from several buildings along the K Street corridor.

And yes, as friends meet for sunset cocktails overlooking Franklin Square, it appears as though Ichiro is engaged in the conversation, neck stretched outward, listening in. Of course, he’s a creature of the cretaceous, on the quiet side.

“As with all things Burning Man art, it's very esoteric, very psychedelic, there's a lot to say, a lot to dig into," Medina-Tayac said. "And we need Marianela back for that."

Fuentes will indeed return to Washington in July for a rooftop discussion on her artwork. Shortly thereafter, Ichiro will move to his next destination, a public venue in San Jose, Calif.