The company's CEO said a large number of residents will come from Virginia, where there are limited treatment options for children. 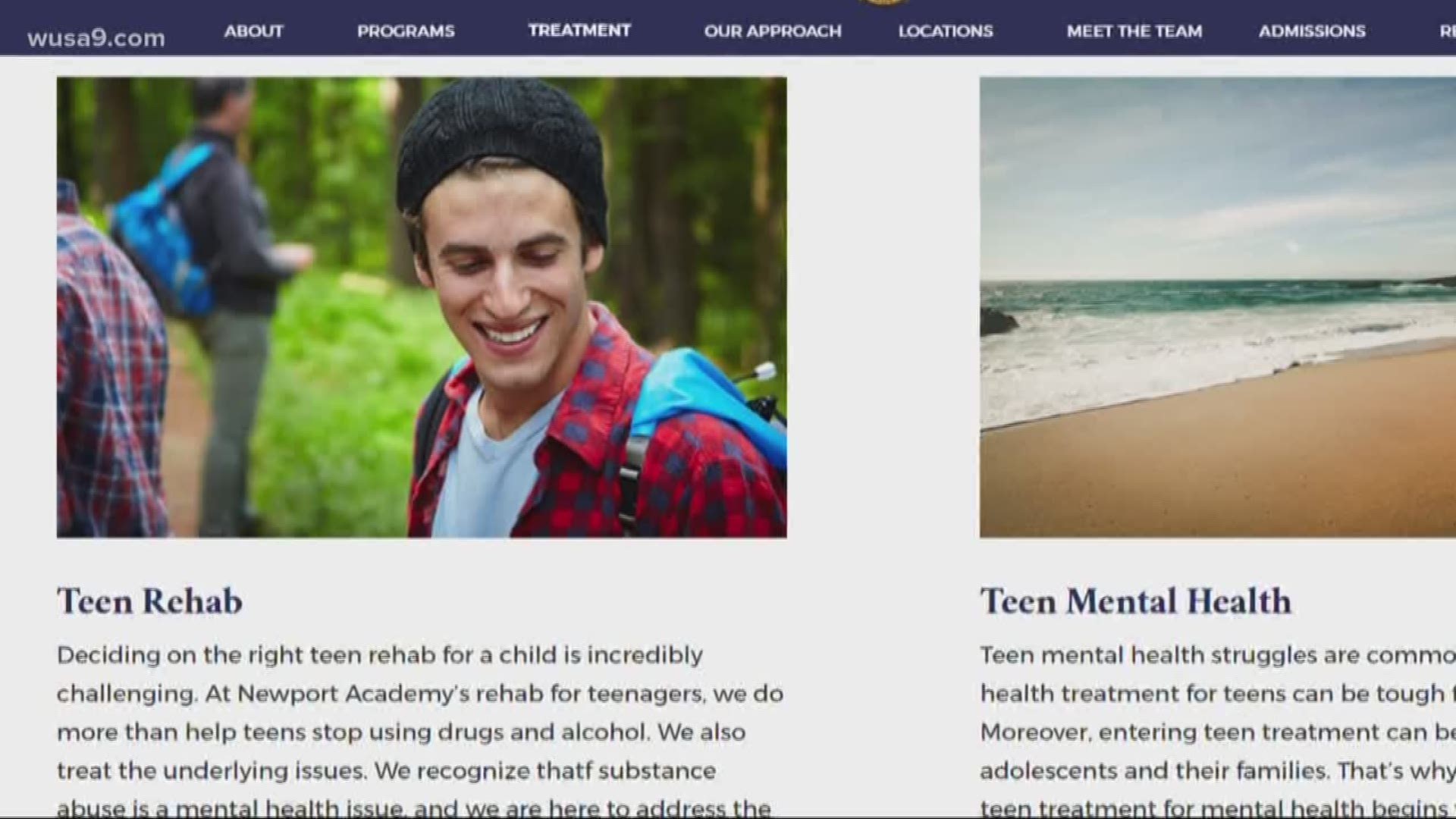 MCLEAN, Va. — The McLean community was surprised by the purchase of three luxury homes now being converted into a high-priced teen drug rehab center. Concerned about safety and traffic, neighbors are now trying to stop the center from receiving a state license to operate.

"It all was done under the radar and all of a sudden the bomb dropped and we've all been scrambling ever since," Sue King who lives behind the three luxury homes, said.

They are secluded on a pipe-stem driveway off of Davidson Road, one block away from McLean High School.

The homes were recently purchased by Monroe Operations, which operates Newport Academies. Located across the country, Newport academies are expensive residential treatment centers for teenagers dealing with drug addiction or mental illnesses.

"Certainly all of us in this community believe that it's important that there's treatment facilities for young people in particular who have problems. None of us are against that," Marc Lampkin, who lives up the street from the homes, said

The neighborhood got concerned when they saw a parking lot going in. The homes were not for sale on the open market, but were sold behind-the-scene, without notice to the community.

Monroe's CEO said each home will have eight residents and six staff. For the neighborhood, traffic is a concern on the two lane road, and so is safety.

"Our property values. The safety because these kids escape and they get into trouble," said King.

That apparently happened last year at the Newport Academy in Bethlehem, Connecticut. The community had several complaints about the treatment center's handling of its teens.

"You'll find them laying in the middle of the road, stealing cars. Escaping all over town," Cynthia Radauskas, a Bethlehem resident, said.

"We are always looking to improve our processes protect our kids and respect the communities which we serve. Newport Academy has grown and developed over the past 10 years. We have learned and adopted new protocols in response to challenges we have faced," Monroe said in a statement.

In McLean, concern is not just surrounding those three homes, but also a fourth one on Kurtz Road, also purchased by Monroe Operations.

So how does a drug rehab facility, whether it's one home or three, pop up in a community without getting permission from the county and the zoning changed?

The Fair Housing Act makes it unlawful to discriminate against people with disabilities or handicaps. Courts have ruled that former substance abusers qualify as having a handicap.

"Our permitting process was the same as any other permitting process. We followed the zoning ordinances exactly. Each home will be licensed separately," Monroe said. "We have and will continue to follow all necessary regulatory guidelines put forth by the State of Virginia."

"It really just drives a giant truck through the loophole of what a group home is," Lampkin said. "I think people can certainly tolerate or embrace your one home, your eight residents that blends in with the community. This is clearly, in our minds, a commercial activity."

The neighbors opposed to the treatment facility are planning to hire a zoning attorney to help fight the facility. Others in the community said a treatment center for teens is desperately needed.

Jamison Monroe responded to several of WUSA's questions in writing. Below are the questions in bold, and Monroe's responses.

Why did you purchase three homes together? Why do you need so much space?

We acquire parcels that will best accommodate our best-in-class facilities and serve those in need. The three houses will allow for a maximum of eight residents each. This is significantly less than the demand for services in Virginia.

The law's intent, I’m told, is to protect individual homes, you are being accused of using a "loophole" to erect a drug rehab "compound," which will "convert" a residential community to an "institutional" use. Did you seek three homes to take advantage of a loophole?

With problems of escaping teens documented in Bethlehem, what have you done to correct problems there and elsewhere?

The reports from Bethlehem that have been spread to the community here are either extremely rare, or false. That said, we are always looking to improve our processes to protect our kids and respect the communities which we serve. Newport Academy has grown and developed over the past 10 years. We have learned and adopted new protocols in response to challenges we have faced. In addition to investing heavily in a well-trained staff, we make sure the environment of care has safeguards in place in order to support our residents on site.

How will you alleviate the strain on the small Davidson road, particularly during opening and closing of McLean High School?

What strain will we be placing on Davidson Road? We will certainly do what we can to mitigate any traffic issues. If this mean adjusting our typical schedule, then we are happy to do so.

Why didn’t you tell the community/county what your intent was before you purchased? People say they are angry that they knew nothing about it.

We have and will continue to follow all necessary regulatory guidelines put forth by the State of Virginia.

How many residents will you house in each home?

Up to eight residents in each home.

How many staff per home?

Approximately six staff will be at each home, depending on the time of day.

Where will your residents come from?

A significant number of our residents will come from the local area and the Commonwealth of Virginia where sadly there is a dearth of treatment options for families who have children that struggle with mental health issues.

Will they attend McLean High School, which already overcrowded?

How much does treatment cost?

Costs to families are typically their copay and/or deductible and that all depends in their insurance provider and plan.

How long does it last?

Length of stay is a clinical decision and made on an individual case basis.

I’m told you will attend a community meeting on April 24. Is that true?

We are currently working with local legislators on setting a date for a community meeting. We are using April 24 as a placeholder until we confirm. We look forward to working together in symbiotic relationship.