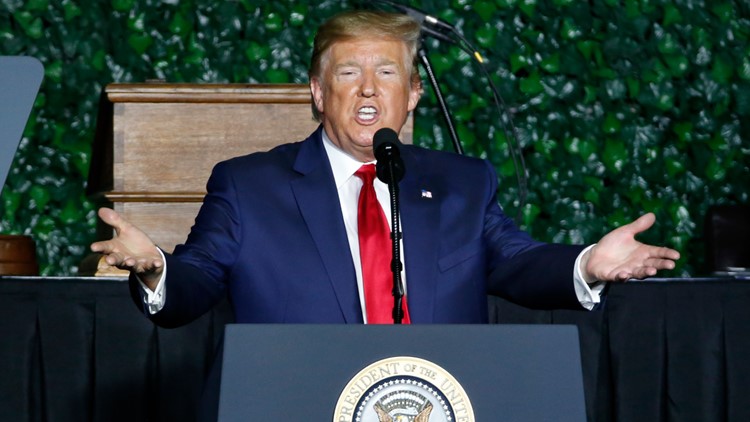 Photo by: AP
President Donald Trump gestures as he addresses a commemorative meeting of the Virginia General Assembly at Jamestown Settlement on the 400th anniversary of the meeting of the original House of Burgess in Jamestown, Va., Tuesday, July 30, 2019. (AP Photo/Steve Helber)

Drunkenness, bribery and... conspiring to steal Louisiana? 19 reasons the House has voted to impeach

WASHINGTON — It only took 10 years after the signing of the Constitution before the House found cause to use Article II, Section 4 – the power of impeachment.

In July 1797, the United States House of Representatives voted to impeach Tennessee Senator William Blount, who had conspired to help Great Britain seize Louisiana – then under control of the Spanish – in order to pay off his mounting debts.

The Senate, so incensed by his actions (and an attempt to escape the capitol in Philadelphia), skipped holding a trial and expelled him from the legislative body outright.

On Wednesday, amid mounting calls for his own impeachment by House Democrats, President Donald Trump released a memo detailing a July phone call with Ukrainian President Volodymyr Zelensky.

In the call, President Trump told Zelensky, “I would like you to do us a favor,” and then asks the Ukrainian president multiple times to look into Crowdstrike – the cybersecurity company that helped investigate the 2016 Democratic National Committee hack – and former Vice President Joe Biden. Biden is currently running for the Democratic nomination for president in 2020.

Trump has also confirmed that he ordered nearly $400 million in military aid withheld from Ukraine a week before the call.

Democrats say all of that is evidence that Trump was using his position as president to get Ukraine to aid in his reelection by manufacturing dirt about a political rival. House Speaker Nancy Pelosi on Tuesday announced a formal impeachment inquiry of the president’s actions.

Republicans have taken a more mixed approach, with some, like former GOP presidential nominee Sen. Mitt Romney, calling the allegations “troubling in the extreme” but waiting for more information. Others, like Senator Lindsey Graham – one of the president’s most ardent and consistent supporters – have called the memo of the call a “nothingburger.”

The President himself has taken to Twitter to decry Democrats' criticism of him as an extension of the investigation of Russia's interference in the 2016 election – which he refers to as a "witch hunt."

While an impeachment inquiry is still a ways away from an impeachment vote, if the House does ultimately vote to impeach President Trump, it would be the 20th time the lower chamber of Congress has voted to impeach in 232 years.

The reasons the House has found valid for impeachment vary widely – from drunkenness to bribery to, in one incident, ruling on obscenity cases while having articles published in Playboy.

Of the 19 votes to impeach, 12 ultimately resulted in the removal of the impeached official from office – either through conviction by the Senate or resignation (or, in Blount’s case, expulsion).

Only two presidents have ever been impeached: Andrew Johnson, in 1868, and Bill Clinton, in 1998. Johnson was acquitted in the Senate by a single vote. Clinton was acquitted without either charge against him receiving even a majority of votes.

Other presidents have been close to impeachment, however.

In 1842, members of the Whig Party, which controlled the House of Representatives, initiated impeachment proceedings against President John Tyler – primarily over his decision to veto tariff and distribution bills passed by Congress. The impeachment effort ultimately fizzled out when the Whigs lost control of the House following the elections of 1842.

In 1860, the House convened the Select Committee to Investigate Alleged Corruptions in Government to examine the administration of President James Buchanan. While the committee ultimately found no impeachable offenses, they determined Buchanan’s administration was the most corrupt in the nation’s history.

Perhaps most famous near-impeachment in American history was that of President Richard Nixon. Amid the fallout of the Watergate investigation, President Richard Nixon resigned in 1974 before the full House was able to take up three articles of impeachment against him for a vote. Had he not resigned, he almost certainly would have been impeached – and likely convicted – for obstruction of justice, abuse of power and contempt of Congress.

Other presidents have faced less-serious attempts at impeachment, including Ulyssess S. Grant (relating to a number of scandals in his administration), Harry S. Truman (over his firing of Gen. Douglas MacArthur) and George W. Bush (illegally creating a case for war with Iraq, the Valerie Plame affair and use of torture).

At least five House Resolutions calling for the impeachment of President Donald Trump had already been filed prior to the Ukraine phone call:

So far, none of the resolutions have made it to the full House for a vote.