BOE President: Montgomery Co. may have been targeted by election misinformation campaign

A video shared purporting to be election fraud may have come from someone intentionally sharing misinformation, Senator says.

GERMANTOWN, Md. — Montgomery County may have been intentionally targeted with unfounded allegations of election fraud, the president of the Board of Elections there says.

Virginia Sen. Mark Warner called on Montgomery County to refer the case to the FBI and Homeland Security, saying it bears markers of intentional misinformation designed to undermine confidence and create chaos.

A video showing an election judge in Montgomery County marking incoming ballots with a pen was shared on Twitter with allegations that the poll worker was committing election fraud by writing on the ballots.

The video shows no fraud or malicious intent, a Montgomery County Board of Elections inquiry found.

"The fact is there was no malicious intent. There was no fraud," Board of Elections spokesperson Gilberto Zelaya said Thursday.

Zelaya explained it is a normal procedure for judges to fill in so-called “light marks” so that the machines that ultimately count ballots can read them clearly.

Montgomery County's BOE President James Shalleck, a Republican, said the sharing of the video was someone who took legitimate ballot canvassing and made false claims on social media that it shows fraud, spreading "potentially intentional misinformation."

The video tweeted Tuesday by the account @C_L_I_C_K alleged “blatant election fraud”, citing that the poll worker was "filling out, changing, or marking up ballots!".

This poll worker is filling out, changing, or marking up ballots!

Camera turns after the operator realized what this guy is doing. pic.twitter.com/V5CSkWZcV9

The tweet was removed as of Thursday afternoon, due to a violation of Twitter rules according to a message posted where the removed tweet previously existed.

Elections supervisors and board members reacted to the video and the allegations by launching an investigation Wednesday as a matter of full transparency, according to Zelaya.

Zelaya explained that the source of the video appears to be from a camera position assigned to one of three credentialed media organizations that visited a county ballot canvassing operation at the Plum Gar Community Center in Germantown Tuesday.

The video is a recorded screen grab of a live Facebook feed of Montgomery County ballot canvassing posted by YahooFinance Tuesday.

The Board of Elections operates its own publicly viewable web cams so anyone can witness the opening and processing of incoming vote-by-mail and drop box ballots, Zelaya said. 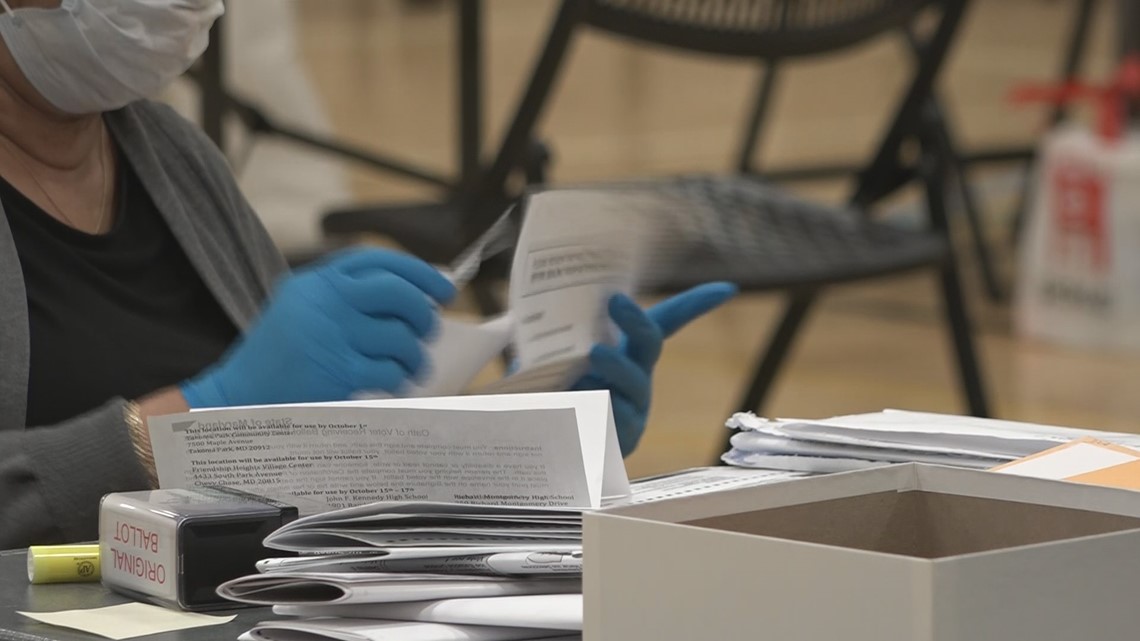 The elections workers seen in the video were interviewed by elections supervisors, according to Zelaya.

Zelaya explained incoming ballots are opened and processed by bipartisan teams of election judges representing each party who sit across from each other at folding banquet tables so they may monitor and check each other’s work.

"When the canvassers are processing thousands and thousands of mail-in ballots and they notice that a voter used pencil or light colored pen, and they didn't fill in this circles completely -- we want to ensure that our scanning equipment records the full intent of the voter," Zelaya said.   "So filling in the circles with a black ballpoint pen is standard operating procedures at the Montgomery County Board of Elections."

Sen. Warner (D-Va.), the ranking member of the Senate Intelligence Committee, and Sen. Mark Rubio (R-Fla.) released a joint statement earlier Thursday, warning Americans to beware of “sensationalist, last-minute claims about election infrastructure” that may be linked to Russia and Iran.

Zelaya said the board welcomes the scrutiny in an election year when President Donald Trump has repeatedly questioned the credibility of mail-in voting.

"We respect the fact that our voters brought this to our attention," he said. "This is the reason why we have the live feed and we welcome the public to come and observe the canvas themselves. Ninety-nine percent of voters really don't know what really occurs after they deposit their mail-in ballot. So this is a learning opportunity. It's Civics 101, so you get the entire picture of what occurs."

Zelaya urged voters to help the canvassing effort by clearly marking ballots with black ball point pen and filling in the entire oval field for their selections.

All ballots are preserved in case of questions.