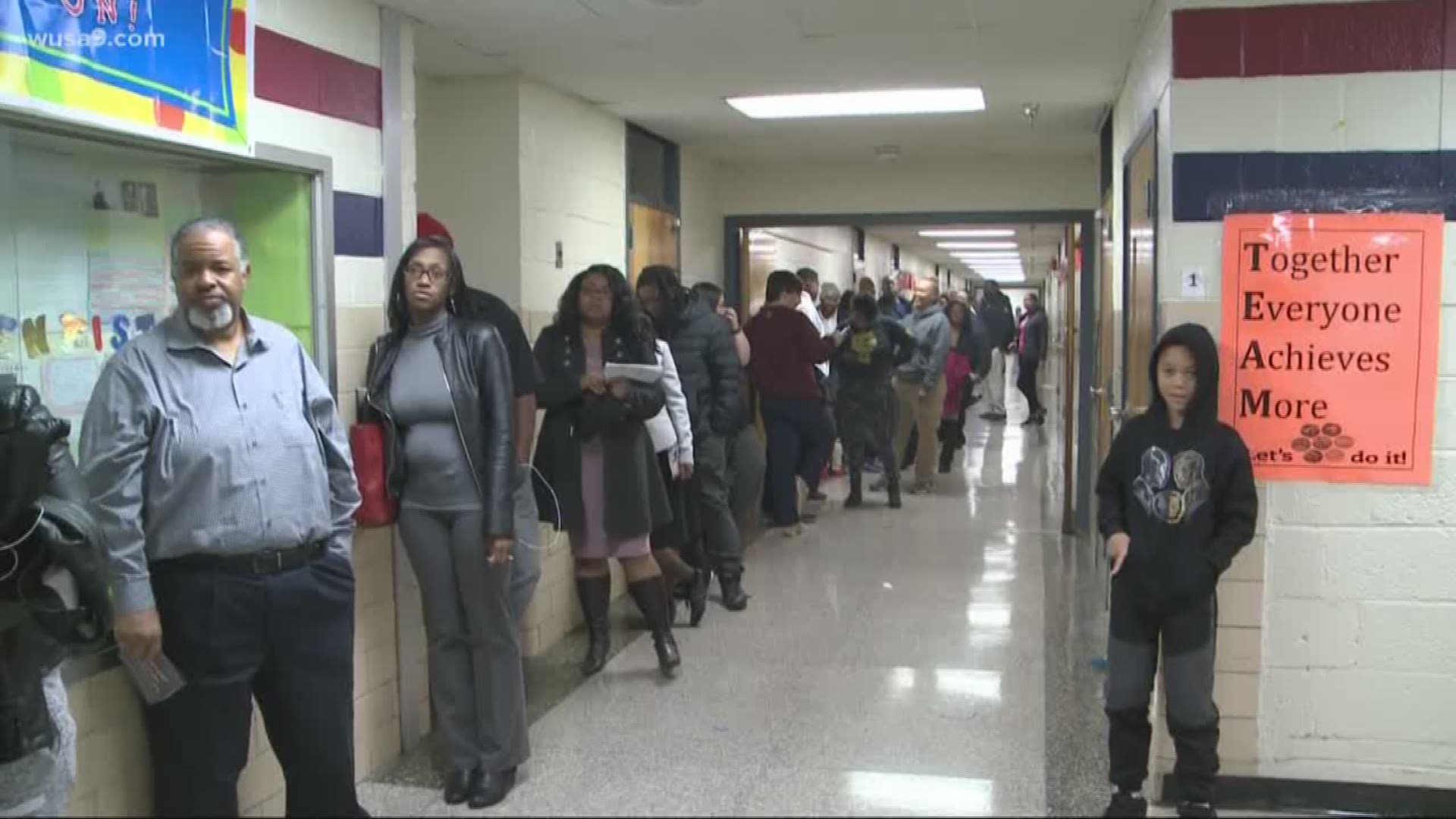 PRINCE GEORGE'S COUNTY, Md. -- At least four polling locations in Prince George's County, Md. ran out of paper ballots while people were waiting in line to vote on Tuesday.

The first location where voters started reporting that ballots had run out was at a community center in Upper Marlboro, Md. More ballots arrived shortly before 6:30 p.m. with a reported 300 people waiting in line to vote. The delay at this location was over two hours long.

The second location to run out of ballots was reported shortly before 7 p.m. at Brandywine Elementary School. New ballots arrived after 8 p.m. after people in line waited more than five hours to vote.

CHEERING FOR BALLOTS IN MARYLAND
• After 4 precincts ran out of ballots...
• Poll workers receive cheers and applause in Brandywine, Md.
• Bringing more ballots...
• After 3 HOURS of hundreds waiting#midterm2018 @WUSA9 pic.twitter.com/Eq0kTlx3GV

RELATED: How secure is your vote in MD, VA & DC? Threats from Russia and within exist on eve of midterms

The board of elections confirmed at least four locations ran out of paper ballots. The third and fourth locations are unknown at this time.

Polls closed in Maryland at 8 p.m. People who were in line by 8 p.m. ballots would still be counted.

HUNDREDS waiting to vote
• This is Prince George’s County, Md.
• Brandywine Elementary School RAN OUT of ballots
• Authorities ordered 1,500 extra ballots
• They were sitting in a warehouse 20 minutes away, I’m told#midterm2018 @WUSA9 pic.twitter.com/BnteerCiM9

The Maryland Democratic party released the following statement about polling locations running out of ballots in Prince George's County:

“Due to unprecedented turnout in Prince George’s County, several polling locations have run low on ballots. All voters should be aware that the Prince George’s County Board of Elections is required, by law, to keep all affected polling locations open as long as required for all voters in line at 8:00 p.m. to cast their ballot. We urge anyone facing difficulties voting to contact the Maryland Democratic Party’s voter hotline at 1-888-678-VOTE.

By 10:15 p.m., there was still not an estimated time for when voting would be completed in Maryland. A spokesperson for Prince George's County Executive Rushern Baker told WUSA9's Adam Longo that the Prince George's County Board of Elections is ran by the state of Maryland and not the county. The spokesperson said the county will not take responsibility over something they have no oversight of.