The FBI provided an intelligence report the day before the Capitol riots suggesting there could be violence. The heads of police say they didn't see it. 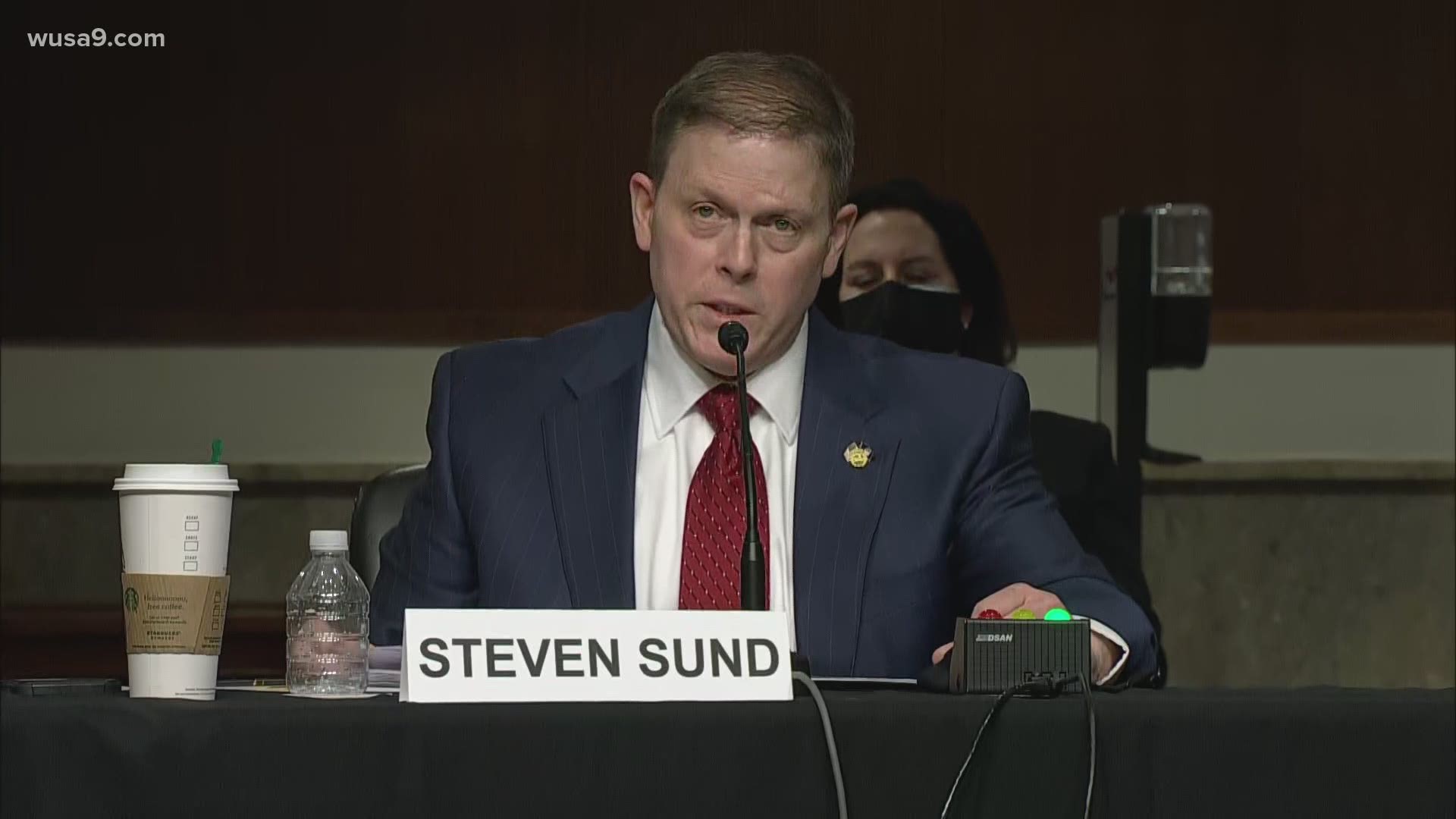 WASHINGTON — An FBI report containing new intelligence about potential violence at the U.S. Capitol on January 6 "never made it" to the U.S. Capitol Police chief or other department leaders, according to public testimony from former Chief Steven Sund.

Sund, who testified Tuesday in front of a U.S. Senate committee, was chief of the U.S. Capitol Police during the Jan. 6 insurrection. He said he learned of the FBI report on Monday, February 22, but that the FBI had apparently sent the report to a sergeant in his intelligence division at 7 p.m. on January 5 – the day before the attack.

Sund acknowledged the report had been delivered to his department, but said it was "raw data" that came in an email, and so didn't appear to be urgent.

"Would it have been an expectation that the FBI would have called to alert to this new intelligence?" Senator Kyrsten Sinema (D-Ariz.) asked.

"I think is there's information coming in the day before an event that has that level of specificity, that it needs a higher level of attention than an email," Sund said.

Acting D.C. Police Chief Robert Contee, who was in charge of the Metropolitan Police Department on January 6, testified that his department received the FBI report prior to the assault on the Capitol, but also said it "had not been fully vetted and it had not been sent through the information chains of the Metropolitan Police Department," and ultimately did not reach him, either.

Sund says even as of January 5: "No entity, including the FBI, provided new intelligence regarding January 6." @wusa9 #CapitolRiot pic.twitter.com/DFD6V68gDm

While it wasn't clear precisely what the January 5 report entailed, Sen. Jeff Merkley (D-Oregon) referenced social media posts the report contained, including one warning about "blood being spilled" and another stating, "We get our president or we die."

Despite the existence of the report a day earlier, Sund said when he led a meeting to discuss January 6, no new intelligence about the impending attack was provided to him.

"As recent as Tuesday, January 5, during a meeting I hosted with my executive team, the Capitol Police board met a dozen of the top law enforcement and military officials from D.C.," Sund said. "No entity, including the FBI, provided any new intelligence regarding January 6."

"A clear lack of accurate and complete intelligence across several federal agencies contributed to this event and not poor planning by the United States Capitol Police," Sund said during his opening statements.

Sund also honed in on the need for quicker responses across federal agencies instead of focusing solely on the US Capitol Police response.

"Even our best efforts were not enough to stop this unprecedented assault on the Capitol," Sund continued. "However, casting blame solely on the United States Capitol Police leadership is not only misplaced, but it also minimizes what truly occurred that day. The focus going forward needs to be on the efforts to improve intelligence and the coordination of security measures between all involved agencies."

When asked if the FBI did not raise the appropriate level of urgency on the intelligence report issued on January 5, Sund said, “I look at this as an intelligence problem that impacted this event.”

"You say it was the intelligence community that missed this?" said Senator Alex Padilla (D-Calif.)

WUSA9 is also providing updates about the arrests, as well as charges and investigations stemming from the assault on the Capitol, in the daily Capitol Breach Newsletter. Sign up for it here.