The George Washington University report looked into the backgrounds of 257 people charged for crimes in connection to the Jan. 6 insurrection on Capitol Hill. 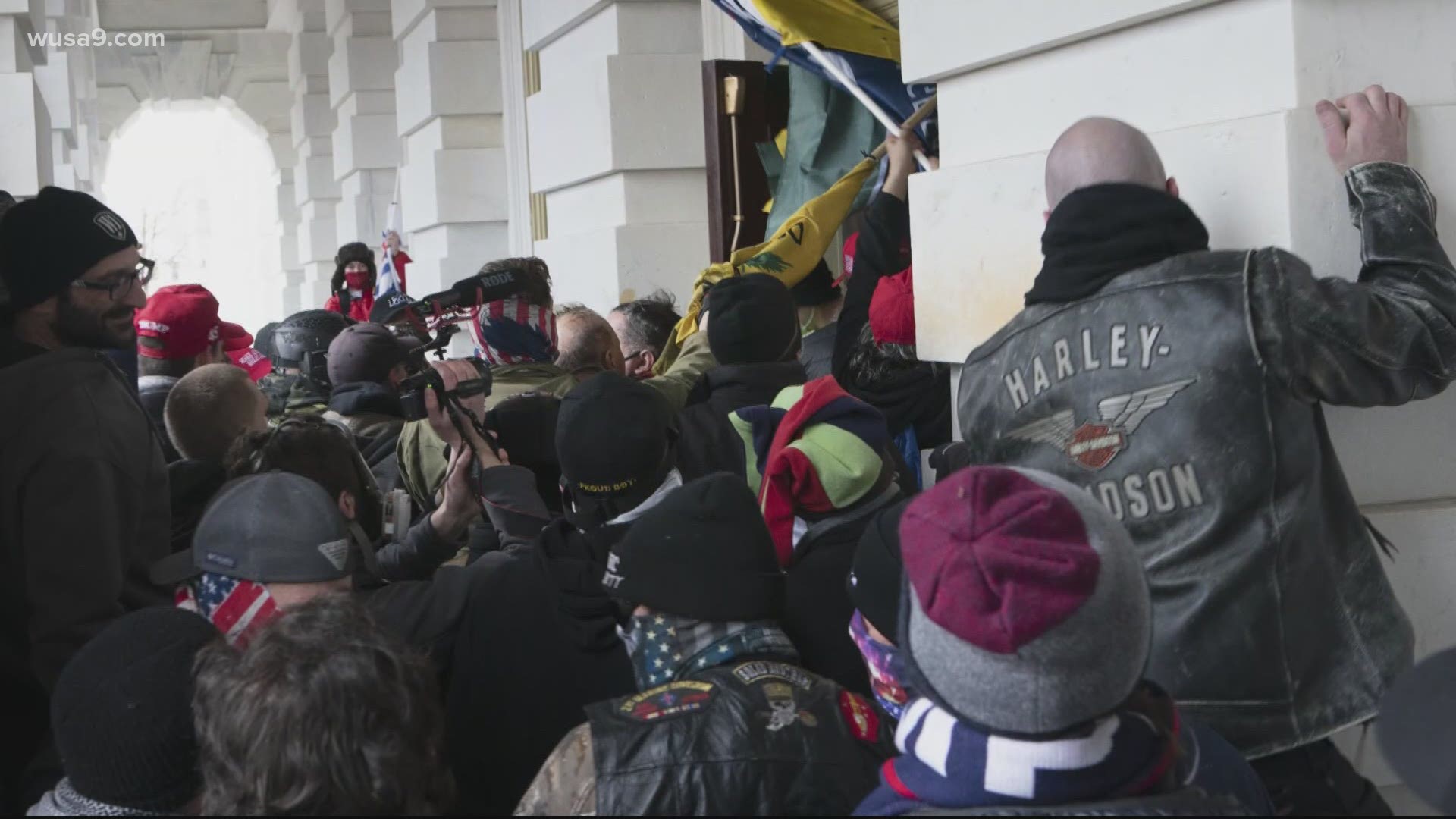 WASHINGTON — On Tuesday, George Washington University’s Program on Extremism released a report analyzing the relationship between domestic violent extremist movements and 257 people charged for crimes during the Jan. 6 Insurrection.

The report is titled, “This is Our House!” A Preliminary Assessment of the Capitol Hill Siege Participants,” says the FBI’s tendency to provide round numbers as to how many people it is investigating for domestic terror does not tell the whole story of the threat posed to the country by such violence.

“Within the Bureau, domestic terrorism is an all-encompassing category that includes a variety of ideologies, including anti-government extremists, anarchists, anti-abortion extremists, white supremacists, involuntary celibates, eco-terrorists, and a smattering of other assorted extremists from across the political spectrum,” the report reads.

The GW report describes, in-depth, all the different parties involved during the Insurrection.

It shows that there were many.

“I think the biggest takeaway of the report is really the variety of the backgrounds of individuals that we saw,” said Andrew Mines, a research fellow at GW’s Program on Extremism.

The report examined hundreds of court documents, Department of Justice news releases, and Freedom of Information Act requests, among other things, to come to its conclusions.

It found that the mob that attacked the Capitol was diverse in many ways.

READ: "This is Our House!" A Preliminary Assessment of the Capitol Hill Siege Participants

The 257 people charged at the time of the report’s writing represent residents of forty states and the District of Columbia. Los Angeles County, California, Franklin County, Ohio, and Bucks County, Pennsylvania had the highest number of alleged participants were shown to have the highest number of people arrested at Insurrection too.

About thirteen percent of the arrestees examined had military backgrounds. And, while the group was overwhelmingly male, the report said it included both participants of young and old. People arrested on January 6 ranged from 18 to 70 years old.

“Within that group, there's been various levels of planning and involvement in the siege that we've seen in available documents so far,” Mines said. “And, they're facing a wide variety of charges as a result.”

The report also focuses on the wide range of far- and extreme-right participants who were present at the siege.

It showed that participants fell into one of three categories, members of militant networks like the Oath Keepers and Three Percenters, organized clusters of people who do not hold formal membership to any group, and “inspired believers” who follow movements like QAnon.

The report said, usually, such groups splinter across lines and form rivalries with one another.

In the case of the Insurrection, that did not happen.

“It is clear that in some cases they have found enough common cause to mobilize together,” the report reads.

The report added the increase in cooperation between such groups is concerning.

But another threat remains within the extremism movement remains -- the rise of white supremacy.

On Tuesday, Wray said the threat of racially motivated violent extremism has skyrocketed in recent years. He said, in 2020, the FBI arrested three times the number of white supremacists it did in 2017.

“Racially-motivated violent extremism, specifically the sort that advocates for the superiority of the white race is a persistent, evolving threat,” he said.

According to the Southern Poverty Law Center, there are 67 hate groups active in DC, Maryland and Virginia. That figure includes White nationalist, anti-immigration, neo-Nazi, and Black separatist organizations.

However, that number has fallen from 87 groups documented by the law center in 2018.

Still, Mines said Americans should think about the spread of hate in different terms than groups and organizations.

“I think one thing or a couple of things that we can do to kind of advance that discussion is to broaden the discussion from just groups to movements,” he said. “I think when we often think of White supremacy, we turn to the classic command and control militant networks.”

Mines said the proliferation of hate can be found among the smaller cluster groups and inspired believers as well.

In order to combat extremism, the GW report urges lawmakers on Capitol Hill to create a nonpartisan Domestic Extremism Commission to identify any systemic national security and policy failures.

It also recommends the Biden Administration use existing structures within the government to improve information sharing between federal agencies that specifically combat violent extremism.

“I think each of the recommendations we made, we made intentionally because they can be enacted immediately,” he said. “And I think without appropriate consideration along each of those lines, yes, we are concerned that threat will grow.”

Mines said the potential for violent extremism to grow in the United States has already been documented in the weeks following the Insurrection.

“There's also been a lot of chatter in online circles since January 6, that this attack was merely the end of the beginning,” he said.

The threat of extremism is growing in America and some people fear the growing diversity of its participants has provided more reason to be concerned.

Wray condemned the January U.S. Capitol riot while making it a point to say his agency is looking at the potential for extremism regardless of where it originates politically.

Wray said the FBI currently has 2,000 active investigations into domestic terrorism. He said that is twice the number it had in 2017.

“It is clear that a large and growing number of the people we have arrested so far in connection with the 6th (Jan. 6 Capitol riot) are what we would call militia violent extremism,” he said.