He's 2 years old. She's about to turn 100. They've formed a friendship across a backyard fence you have to see

Benjamin Olson and Mary O'Neill formed a friendship that helped them both through the pandemic. 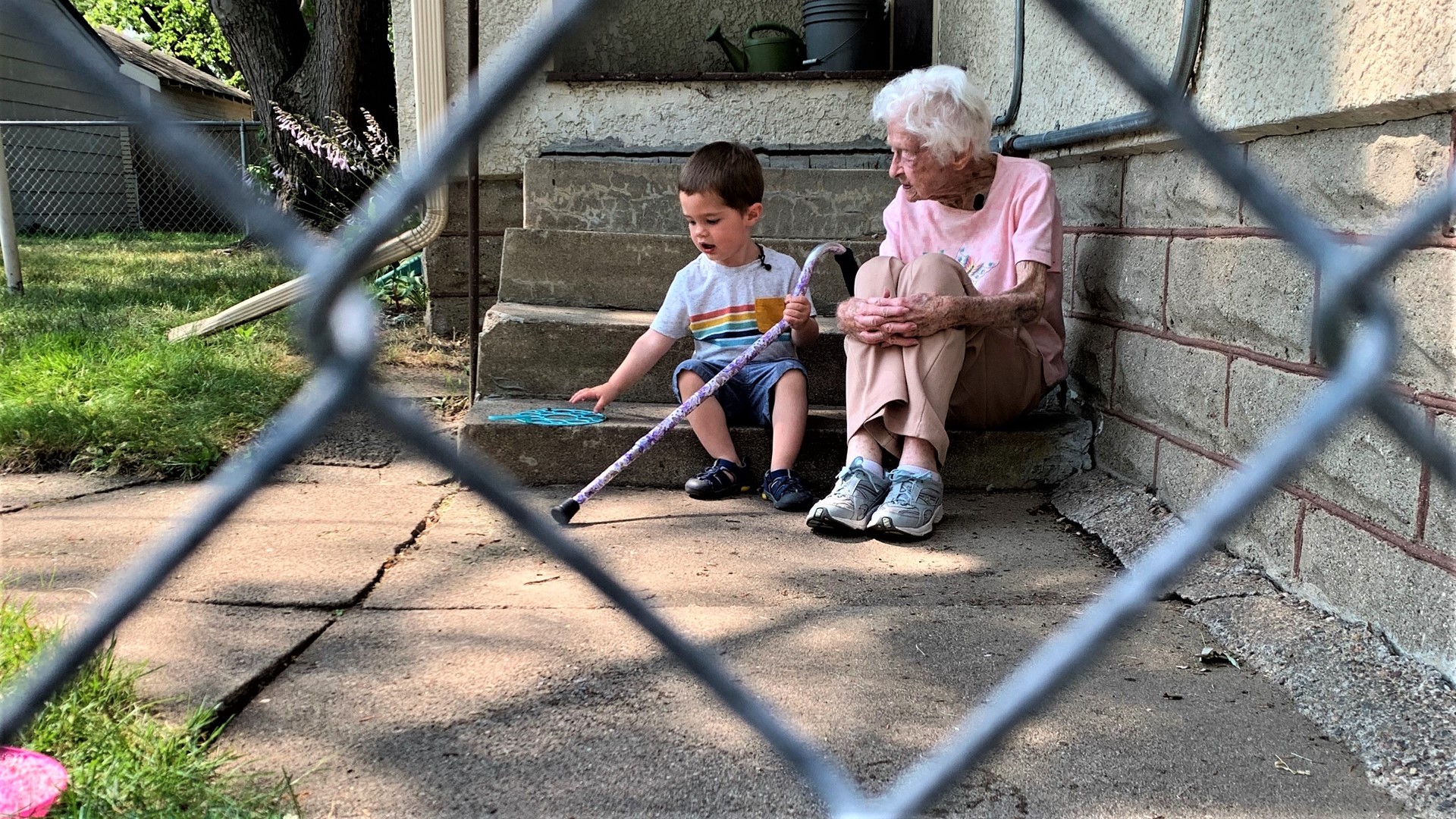 In one, Benjamin Olson just turned 2.

For more than a year, both found themselves pandemic prisoners.

“A lot of just us in this house,” Sarah Olson, Benjamin’s mother, says. “He has never really had any other friends.”

“I'm playing against myself,” Mary says.

All that changed when Mary and Benjamin found each other.

“Hi Benjamin,” Mary says, smiling and waving, as her 2-year-old neighbor toddles down his back steps.

He kicks her a ball.

She lifts her cane over the fence and bats it back.

“Here it comes,” Mary says enthusiastically as Benjamin chases down the ball to restart the game.

Stuck at home, Benjamin’s mom watched from across the yard as the friendship blossomed.

Benjamin points his stomp rocket across the fence.

Benjamin slams down his foot and the rocket sales over a giggling Mary’s head.

Minutes later, Benjamin is blowing bubbles as Mary cheers him on from across the fence.

“Mary said that she had these trucks for Benjamin,” Sarah says.

Before Sarah knew it, Mary had emerged with a laundry basket filled with old metal Tonka trucks.

“My son's,” Mary says. “He passed away, so they've been sitting down in the basement for years and years.”

“They're the closest thing to grandchildren I have around here,” Mary says.

And as the pandemic eased its grip, Benjamin learned to open the gate separating him from Mary.

Now he knows the grass is even greener when you can share a friendship on the same side of the fence.

“Oh boy, I'm going to get some dirt,” Mary says as Benjamin approaches with clenched fists.

“Thank you,” Mary says, as the dusty contents of Benjamin's hands is transferred to hers.

Days passed during the year when their yards remained empty.

“I missed them, missed seeing them,” Mary says, “when it was too cold for them to come out, when it was raining.”

Listening nearby, Benjamin’s mom wipes away a tear.

“I had never known that,” Sarah says. “I'm so happy they have each other.”

When friendships form, powerful forces are engineered. Look no further than Benjamin and Mary who've built a bridge over 98 years.

He's 2 years old. She's about to turn 100. They've formed a friendship across a backyard fence you have to see