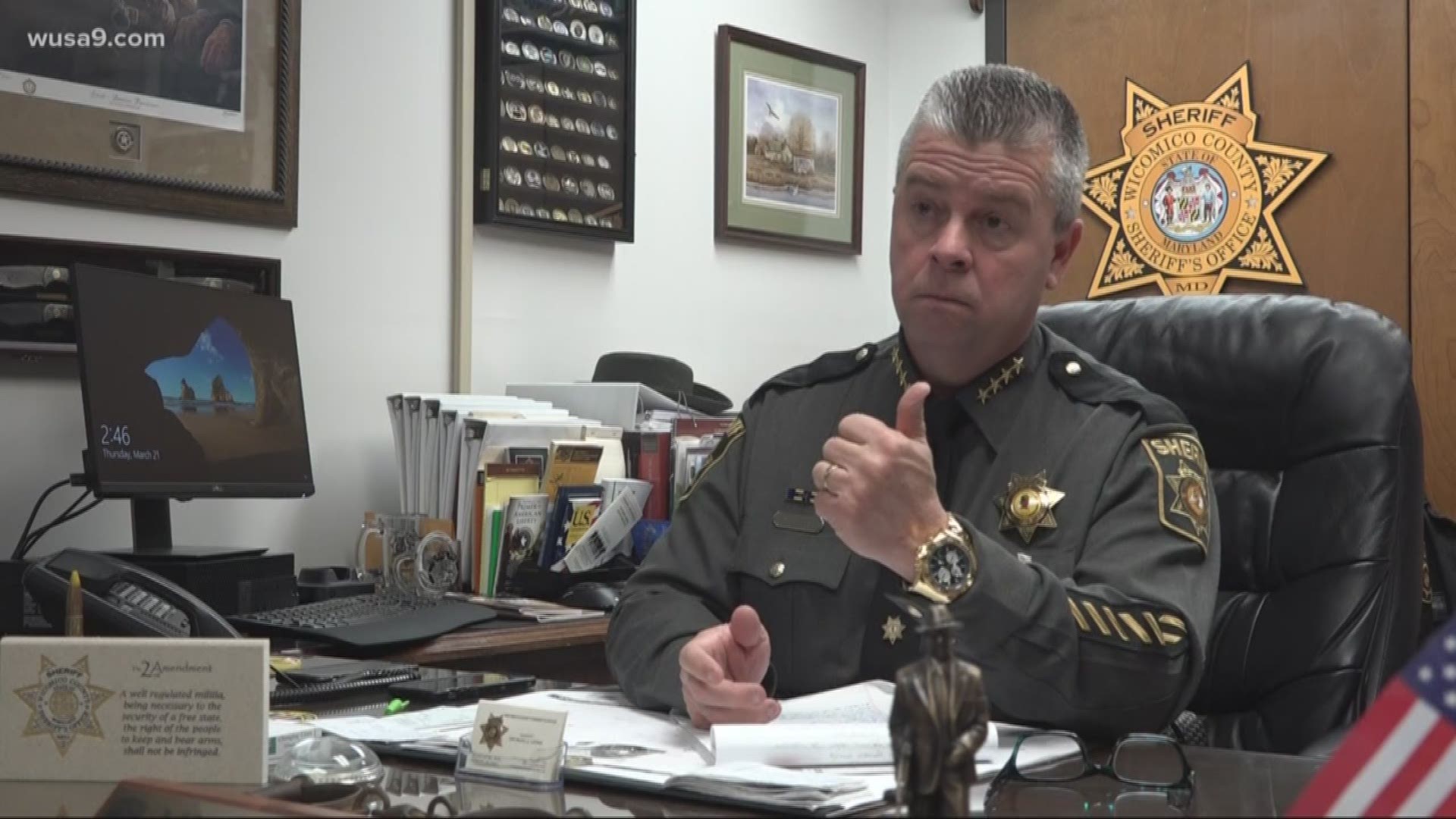 Sheriff Mike Lewis of Wicomico County Maryland is no stranger to winning attention with bold talk.

Local critics accused him of overkill when he sent a military assault vehicle 145 miles north to Baltimore during riots there in 2015.

His Facebook repost of Hilary Clinton in handcuffs sparked outrage.

Lewis is an outspoken supporter of President Donald Trump who recently joined the President in the oval office to support the veto of a resolution opposing a border wall.

But recent declarations that he will openly defy state law by refusing to enforce new gun regulations proposed in the Maryland General Assembly has critics saying he has gone too far.

“He has the responsibility to understand that his words can openly lead to violence,” Gould said. “White Nationalists very easily can be inspired by noncompliance.”

Sheriff Lewis said he continues to stand by his “We Will Not Comply” declaration depending on the details of any Maryland gun legislation that may pass the 2019 General Assembly Session.

“I would have to see what passes first,” Lewis said. “But had it passed in its original format, would not have complied. Absolutely not.”

RELATED: Maryland authorities could face open defiance if new gun laws pass, including from one of their own

One bill currently before the legislature would criminalize the possession of “heavy barrel” assault rifles that have already been legally purchased under an exemption to a previous Maryland law restricting certain assault-style rifles.

Another bill proposed in the wake of the mass shooting at the Annapolis Capital Gazette Newspaper would require training, state-level background checks and state-licensing for all gun purchases including shotguns and rifles more commonly used for hunting and target shooting. Currently those restrictions only apply to handguns and the state list of semi-auto assault rifles.

A shotgun was used in the attack on the newspaper that killed five people.

That bill has been pared down in committees to only require federal background checks for the private person-to-person sales of shotguns and rifles.

Sheriff Lewis first took his defiant stand during a rally of Second Amendment supporters gathered in Annapolis to lobby legislators in February. The crowd shouted and applauded loudly after his declaration “We will not comply”.

Lewis, as an elected law enforcement officer, has become the most powerful and visible supporter of the "We Will Not Comply" movement started by the Maryland gun rights group Patriot Picket who are frequently seen at the state house wearing tee shirts emblazoned with the statement.

Lewis said when he talks about “civil war” it's not to inspire defiance or violence. He says it's his duty to “warn” leaders of the stakes.

“What’s going on here is once again they [gun control advocates] are pushing and they’re pushing,” Lewis said. “I know many people who will not surrender their guns, period. And it would be an all out Civil War. Do I think it’s going to come to that, Scott? No I do not.”

Mitchell scoffed at the idea that open defiance of state gun laws might inspire confrontation or violence.

“I think you need to look at Ghandi who had non-violent, non-compliance," Mitchell said. "That’s where we’re at."

Lewis, a Republican, was elected to be Sheriff in Wicomico County in 2006 after a 22-year career with the Maryland State Police where he left with the rank of sergeant.

He was re-elected in 2018 and has never been opposed since taking office.

Wicomico County has slightly more than 100,000 residents with a median household income of about $53,000. It's the home of the chicken producer Perdue Farms, and much of the county is rural.

The city of Salisbury is the county seat. The city is home to Salisbury University and the region’s major medical complex making the health care and education sectors major employers in the county.

Fifty-two percent of the county voted for President Donald Trump in 2016.

“We’re a conservative county,” Lewis said. “The majority of people down here rely heavily on their weapons to protect their farms and to protect their homes. We only have 96 sworn deputies but were covering 374 square miles.”