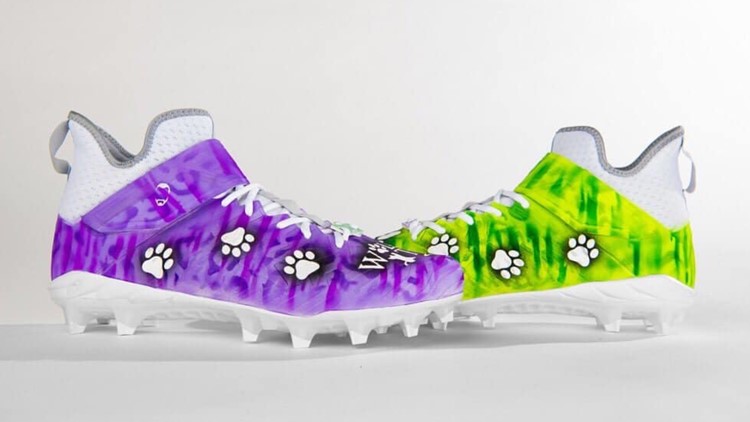 Photo by: Wolf Trap Animal Rescue
Some Redskins players are wearing cleats that represent the animal rescue during Sunday's game against the Green Bay Packers.

LANDOVER HILLS, Md. — For this year's 'My Cause My Cleats' campaign, some Washington Redskins players have chosen Wolf Trap Animal Rescue as the charity they want to represent.

Players including Dwayne Haskins and Matt Ioannidis have chosen the animal rescue group as their charity of choice. The player are "wearing their hearts on their feet" in Sunday's game against the Green Bay Packers.

Hundreds of NFL players will showcase causes that are important to them with custom cleats during all Week 14 games for the 'My Cause My Cleats' campaign.

"My Cause My Cleats allows players to express their commitment to the causes that are most important to them," a press release said. "Players will have the opportunity to raise money for their cause by auctioning their cleats off at NFL Auction; 100 percent of money raised will be donated to the player’s charities."

Fans can also bid on game-issued player cleats to help raise money for the chosen causes.

The 'My Cause My Cleats' campaign is an opportunity to players and the public to give back to both local and national charities.

In years past, players have chosen the Morgan Moses Foundation, the International Justice Mission, the Susan G. Komen foundation, the Ty Nsekhe Foundation, Ryan Kerrigan's Blitz for the Better Foundation, Loads of Love, Starz24, the National Center for Children and Families and Autism Speaks.