Fairfax County police worked to investigate the reported threat and, 'have found no evidence of any acts of violence of injuries.' 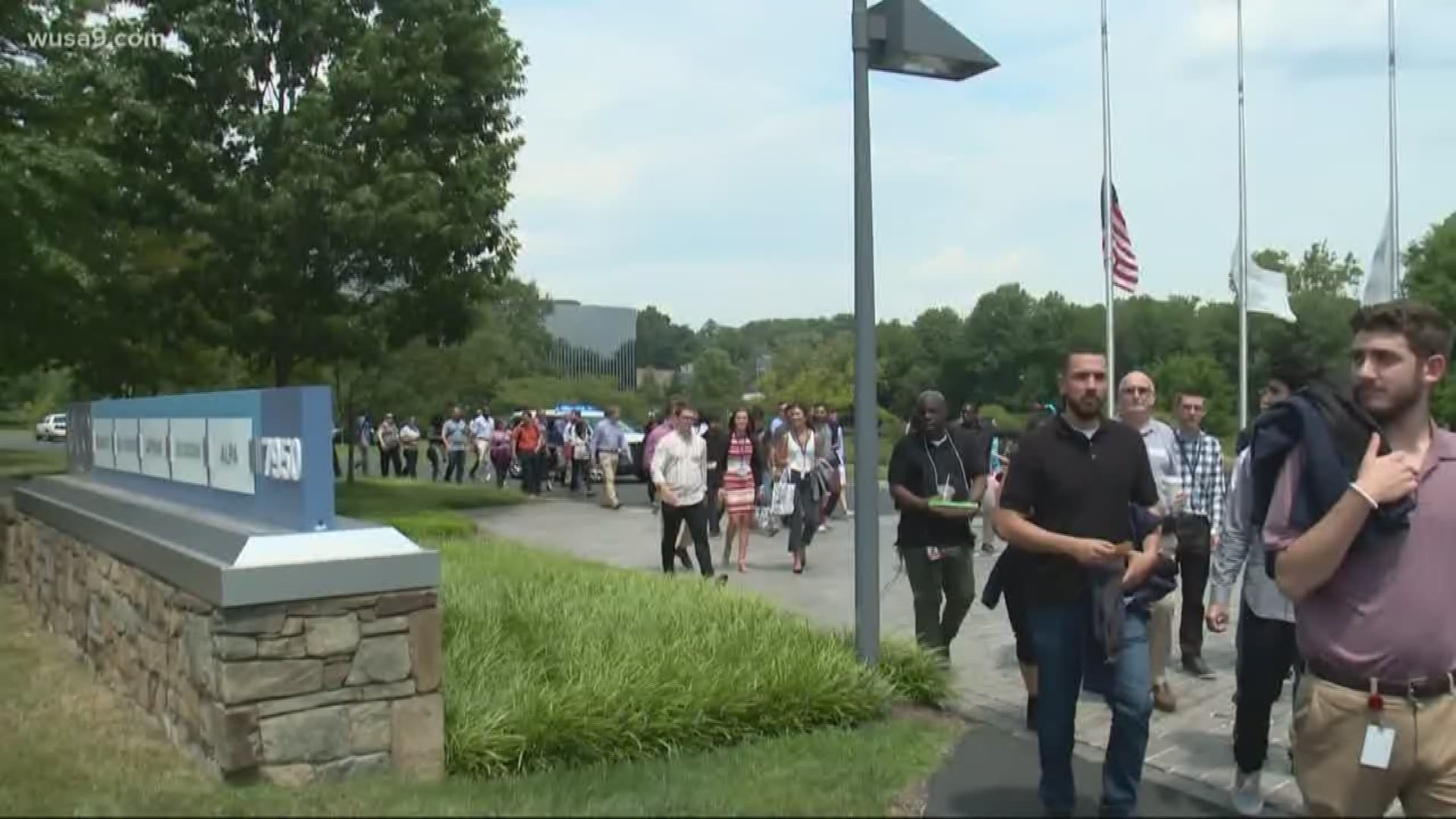 MCLEAN, Va. — Authorities evacuated the Gannett Building in McLean, Virginia, after police searched for a reported armed ex-employee who was seen inside.

The building, which also houses USA Today and several other businesses, was evacuated Wednesday afternoon. Hundreds of staffers could be seen exiting the workplace into the summer heat of Northern Virginia, some carrying their bags and others even holding their lunches.

Fairfax County police said they got a 911 call just before 12 p.m. from inside the building at 7950 Jones Branch Drive that there was an ex-employee armed with a gun there.

"We were told it was an ex-employee of the building," Chief Edwin Roessler said during a news conference Wednesday afternoon.

Roessler said they didn't know if the person was an ex-employee of Gannett or one of the other businesses inside the building. 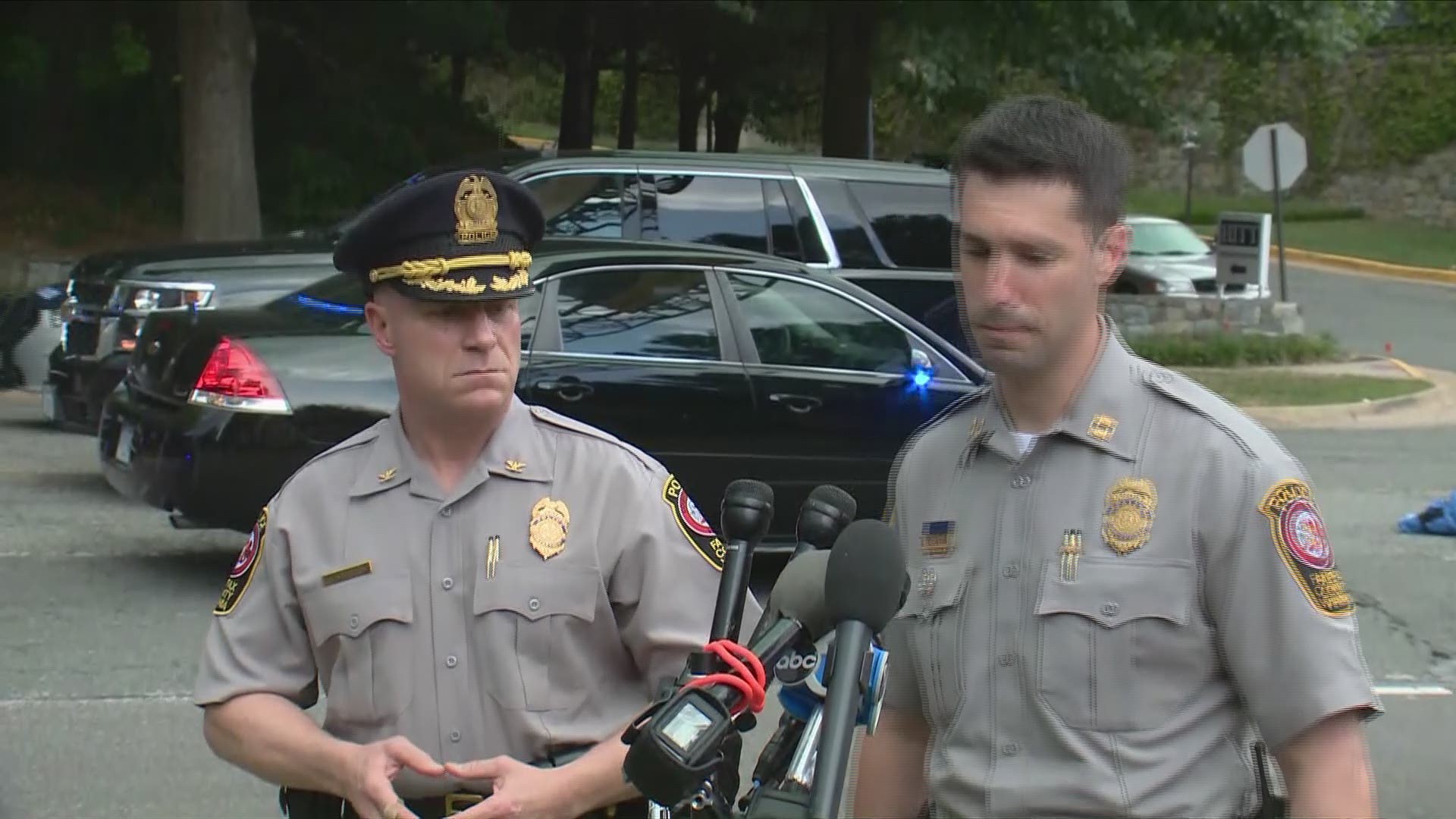 Roessler said they checked the building floor by floor as they continued to evacuate employees who were sheltered in place. He said they treated the threat as credible until the building was cleared.

Roessler said police originally considered the ex-employee identified by the 911 caller as a person of interest, but didn't identify them because they "may have done nothing wrong."

Later, at about 3:15 p.m., he said there was, "no evidence that person committed a crime" and they were found in another location in Fairfax County.

Roessler said the person of interest is in communication with police.

"Everything is safe and I do not have any evidence that a crime was committed at this time," Roessler said.

Roessler said that even though the call disrupted business, he's thankful it turned out to be a "non-event."

"Everybody in that building did the right thing, they saw something that was out of place and they called 911," Roessler said.

"Alarms sounded at the building as police squad converged on the scene," USA Today reported. "Law enforcement officers with rifles and body armor were patrolling the area and a helicopter hovered overhead."

Staff could be seen calmly walking away from the building in suburban Northern Virginia.

"It was an alert that came over the emergency alarm that we should leave the building and get away from it," one man evacuating told WUSA9 crews at the scene.

"Basically, I was just following directions, I got out as quickly as possible, and as soon as I felt as though I was at a safe distance, I turned my cameras around," a another man -- a journalist for USA Today -- told WUSA9.

In an email to staff, USA Today reported, all the Gannett and USA Today employees that evacuated the building were safe.

The national paper reported Gannett's acting chief operating officer, Barbara Wall, said police received a report Tuesday night that "an employee of one those businesses had received a threatening text from a former co-worker."

USA Today said police are working to determine if those two incidents are linked.

Earlier this year, the company that owns WUSA9, TEGNA, moved their offices out of the building in question. Gannett recently merged with GateHouse -- the two newspaper giants combined for roughly $1.4 billion. McLean, Va., where the building is located, is about 25 minutes from downtown Washington, D.C.

Valo Park, which operates the office building, declined to comment or say how many businesses lease space from them.

The building had reopened by Wednesday evening.

This incident comes just a few days after two mass shootings in the U.S. that left more than 30 people dead.

RELATED: After weekend mass shootings, 2 countries advise against US travel