Nicole Mittendorff may have been victim of cyberbullying

The missing firefighter found late Thursday may have been a victim of cyberbullying. 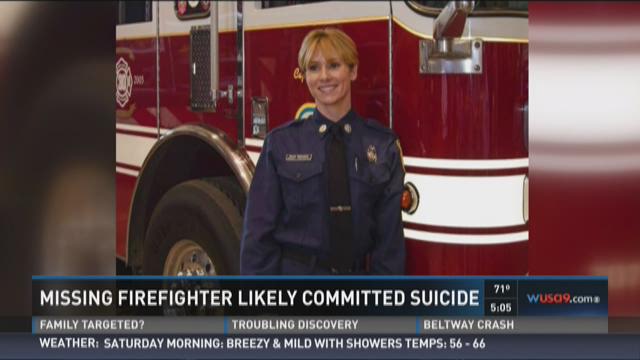 According to police, a suicide note was found in Mittendorff's car. Investigators do not suspect any foul play in her death.

Investigators are still piecing together a timeline to determine when Mittendorff arrived at the park and when she died.

In the wake of her death, some people are expressing outrage over sexist online comments about Mittendorff and other Fairfax County female firefighters.

"It was pretty raunchy. It was raunchy. It was offensive. It was disrespectful. It was ridiculing," said retired federal government worker and Fairfax County resident Jane McKinley. She saw the postings on the community forum Fairfax Underground while searching for more information about Mittendorff.

The postings appear to be from fellow firefighters, though they are anonymous.

"I was alarmed and wanted to let the public know that there was this blog out there that was defaming these female firefighters and medics, not only Nicole but others as well,"

Fire department officials tell WUSA9 that they are aware of the lurid and sexist postings on the forum and are looking into them. But McKinley says an investigation is needed to determine if the people posting the sexist comments are county employees. If they are, she said disciplinary action should be taken.

"There was a poster that kept insisting on revealing photos of Nicole. He kept asking over time," and another poster said he did have photos. McKinley said the level of detail about fire stations, lockers, contents of women's lockers and dates of fundraisers makes is seem like the posters are firefighters.

She found it very disturbing and worries that it could be part of a hostile workplace environment.

"If these really are firefighters, it sounded like this is an environment that has been created in the workplace that is completely unacceptable. These are public servants?" McKinley said.

The postings began several years ago, not long after Mittendorf began her career with the Fairfax County Fire and Rescue department and Fairview Station 32. It's not known if Mittendorff saw the postings, but McKinley thinks it's likely. She's concerned the cyber-bulling may have played a role in her death.

"If you already have other factors going on, you're in a very stressful job. If you are feeling maligned and disrespected by the people you're with, and your life depends on, I can imagine it can undermine your self-esteem," said McKinley. "You can't be immune to day in and day out being disrespected." She said that the federal government requires constant training about sexual harassment and hostile workplace environments and suggested Fairfax could use more training.

Fairfax County officials declined to be interviewed on the subject Friday. On Saturday, Fairfax County Fire and Rescue asked the public to respect the family's privacy at this time. County spokesperson Tony Castrilli sent this statement:

“During this difficult time we are respecting the privacy of Nicole Mittendorff’s family, and providing support to the men and women of the Fairfax County Fire and Rescue Department who are grieving under these challenging circumstances. If you or someone you know is experiencing a mental health crisis, or is looking for support, call PRS CrisisLink, 24/7, at 703-527-4077 or text CONNECT to 855-11.”