Amy Hobbs, a former nurse in Fairfax is recovering from a traumatic brain injury that makes her sound Irish, even though she's never even been to Ireland. 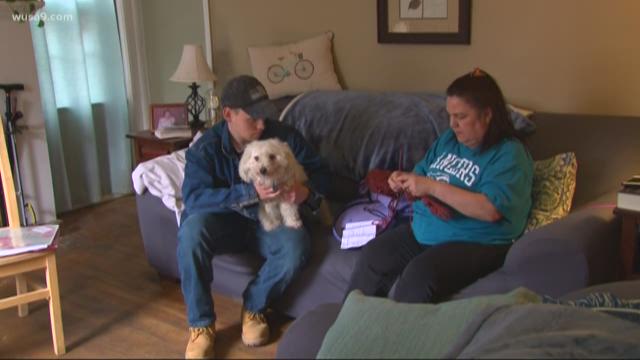 March is Brain Injury Awareness Month. Many may know brain injuries can cause all kinds of challenges.

Amy Hobbs, a former nurse in Fairfax is recovering from a traumatic brain injury that makes her sound Irish, even though she's never even been to Ireland.

"I heard this shriek of tires and I look in my review mirror and I see this car coming at me," recalled Hobbs about the car that slammed into her in 2010.

The driver who hit Amy had been texting and did not see that traffic had stopped. Her head was violently shaken by the impact. It was a role reversal for Hobbs, who use to take care of stroke and brain injury patients.

"The day after me accident, I remember the neurologist coming in to my room and pointing to his tie and saying, 'what is this?' And, I did not know. And I was terrified. I knew something wasn't right, but I didn't know what it was," said Hobbs.

She had a traumatic brain injury. She also had stroke and a spinal cord injury.

"When I woke up from the surgery, I had an accent, which actually sounded Jamaican at the time," said Hobbs.

She has been diagnosed with Foreign Accent Syndrome. Typically, the accent stays the same, but hers changed from Jamaican to Irish.

"She had a mild apraxia, which means that the signals from your brain aren't being interpreted by your muscles appropriately...A lot of people have apraxia without it sounding like a foreign accent. But part of that is that movements become more difficult because your brain isn't sending the correct signals to your muscles," said Pickford.

Hobbs said she could not "fake it" if she tried. It's the way vowels are formed that makes it seem like an Irish accent.

Hobbs said that speaking in a way that mimics an Irish accent.

A bigger problem for Amy, a former home health nurse, is her memory loss. She's unable to work, but she's continues recovering with the help of her three children, now college, her husband and her dog Snowball, who keeps her company.

Amy Hobbs is one of the brain injury survivors speaking March 19th at a fundraising event for Brain Injury Services in Springfield.