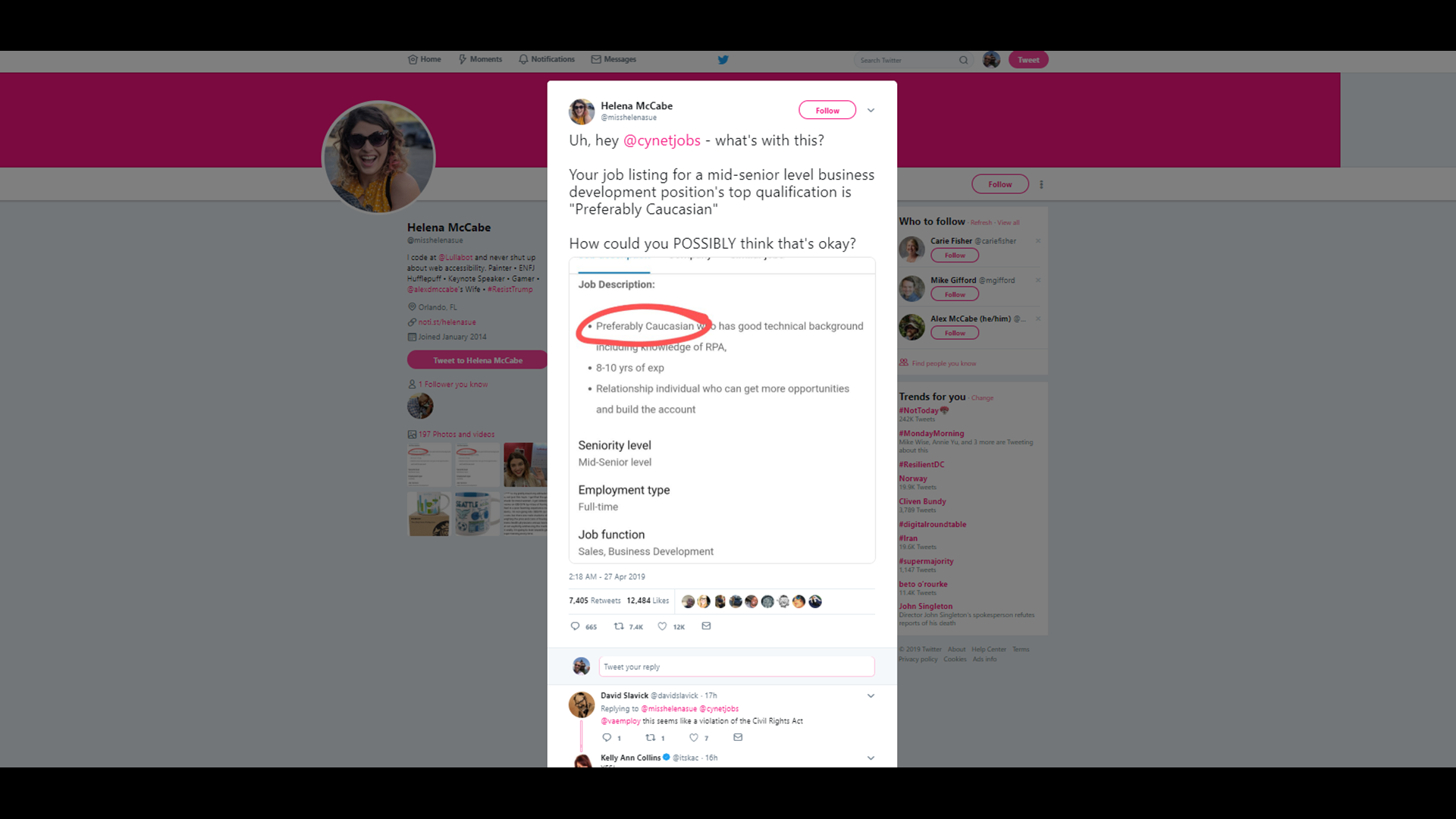 WASHINGTON -- One of Virginia's most popular companies is facing social media ridicule. Hundreds of posts are slamming Cynet Systems over a racially discriminatory job posting.

The company apologized, but a lot of critics wonder how the job post could get by even the most cursory review.

"Uh, hey Cynet Jobs -- What's with this? Your job listing for a mid-senior level business development postions top qualification is 'Preferably Caucasian.' How could you POSSIBLY think that's okay?"

The job was posted across multiple job listing sights all said the same thing: "Preferably Caucasian." Even after being called out, it took the company 44 hours to respond, before finally tweeting: "Cynet apologizes for the anger and frustration caused by our offensive job post... The individuals involved have been terminated."

First we would like to say simply that we truly regret the fact that individuals formerly employed by Cynet Systems went outside of company policy and included an inappropriate requirement in a job listing. We understand why some may have been upset seeing this listing, because we were too. It is a long-standing policy for our company to refuse any request to list jobs only seeking candidates of any specific ethnicity, gender, or other inappropriate restrictions, and we will turn clients down if they demand requirements of this type be included. Further, Cynet Systems itself is proud to be an immensely diverse company. Both of our owners are Indian-Americans, our workforce is over 60% minority, and we are certified as a diversity supplier by the National Minority Supplier Development Council.

The individuals involved in this case were terminated immediately for a significant violation of company policy, and we have already begun a review of all currently existing and upcoming ads to ensure no similar issues exist. We are also looking at measures that could help us catch offensive or outside-of-policy ads before they ever go live to ensure this can’t happen again.

Another company job posting over the weekend called for a "female candidate only." WUSA9 is still waiting for a company response on that one.

The Civil Rights Act of 1964 prohibits employment discrimination on the basis of race, color or sex.

Cynet is a IT staffing company in Sterling that brags about its awards as one of the top hiring firms in the country. It touts its diversity and inclusion.

Even after the apology, lots of critics are still looking for more. "Instead of writing something generic... maybe explain to us -- how did this happen," one person said.

"This still does not feel like enough," tweeted another.