VERIFY: Trump threatens a government shutdown over wall funding; Would Border agents have to work?

We can verify that border patrol agents would still have to work during a government shutdown, and would get paid whenever Congress and the President sign a spending bill. 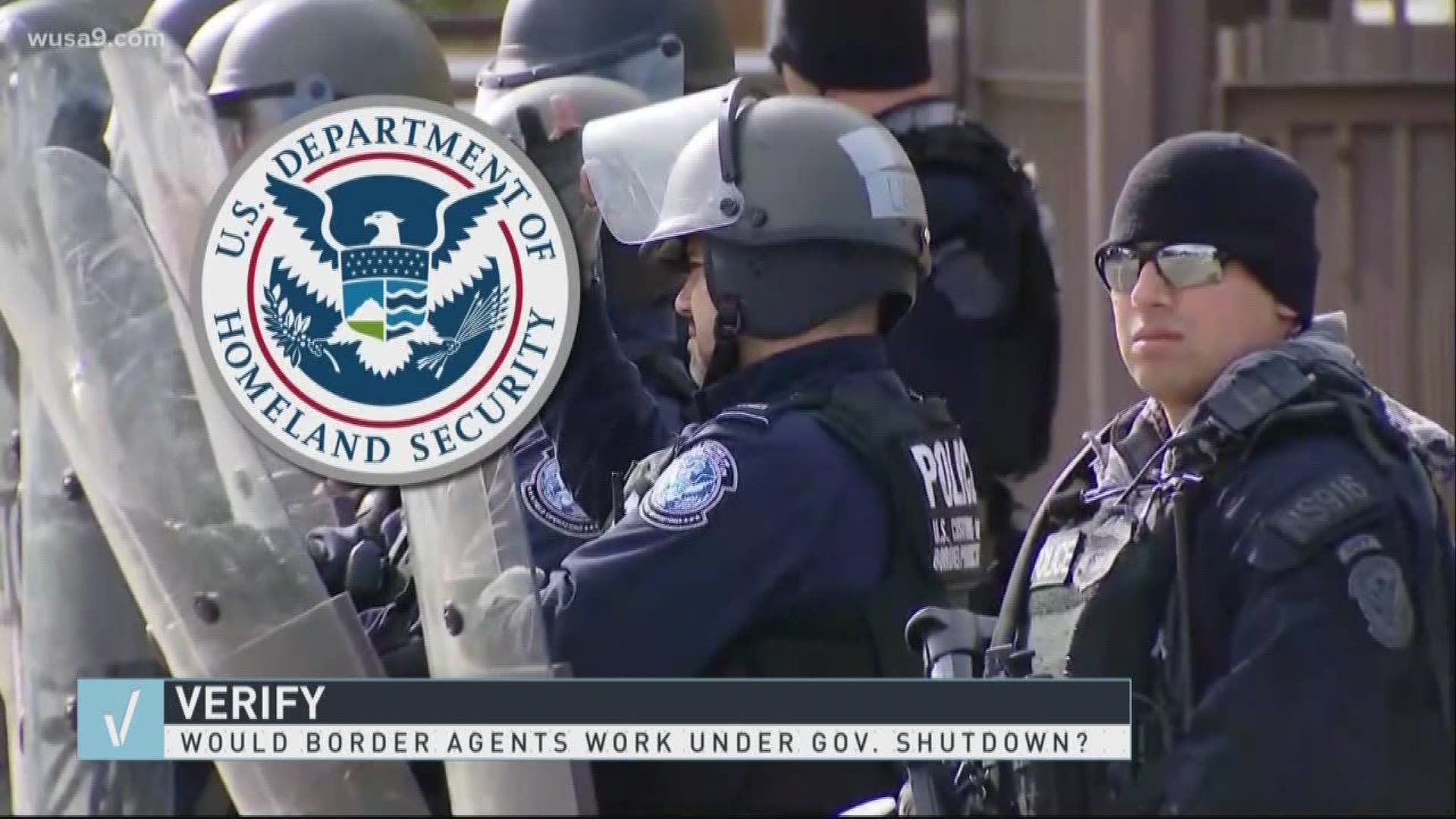 Yes, "essential" also called "excepted employees" will have to work. That's about 92 percent of Customs and Border Protection. Homeland Security is supposed to pay agents following a signed budget by Congress and the President.

U.S. Department of Homeland Security- "Procedures Relating to a Lapse in Appropriations"

There's only seven business days left until the government spending bill runs out. Some people online are asking how that will affect agents along the border.

I'm thinking that if there's a government shutdown, does that mean all the soldiers, Border Patrol and ICE agents protecting us from those terrorist caravans have to take a few weeks off?

Going out on a limb here, but the border patrol will be exempt from government shutdown over border security?

I don't know, but am assuming "government shutdown" includes FBI, CIA, and Border Patrol not working. How does that help with safety?

Federal employees must work during a government shutdown if leaving their posts would compromise national security. Those employees are referred to as "essential" or "excepted."

"Excepted employees include employees who are performing emergency work involving the safety of human life or the protection of property or performing certain other types of excepted work," according to the U.S. Office of Personnel Management.

All U.S. agencies must evaluated which of their employees are essential to maintaining national security in the event of an appropriations lapse, and which ones can be furloughed, or "placed on temporary non-duty, non-pay status."

U.S. Customs and Border Protection (CBP) has 59,072 employees. Of them, 54,143 employees are required to work during a shutdown, or about 92 percent of agency, according to Homeland Security data from March 2018.

For reference, U.S. Immigration and Customs Enforcement (ICE) has 19,749 employees; 16,079 of them are expected to report to work in the event of a shutdown.

But will Border Patrol agents be compensated?

Do the Border Patrol and the Military get paid during a shutdown ?

Non-furloughed employees, like Border Patrol agents, will get paid, just not until after the government re-opens and a new spending bill is signed, according to the Office of Personnel Management.

"Agencies will incur obligations to pay for services performed by excepted employees during a lapse in appropriations, and those employees will be paid after Congress passes and the President signs a new appropriation or continuing resolution," OPM wrote.

So we can verify that border patrol agents would still have to work during a government shutdown, and would get paid whenever Congress and the President sign a spending bill.