VERIFY: Can a Supreme Court Justice be impeached if the judge lied during confirmation hearings?

Yes, as long as a majority of the House votes for impeachment. Then the Senate needs to pass a conviction with a vote of 2/3 or 67 votes. 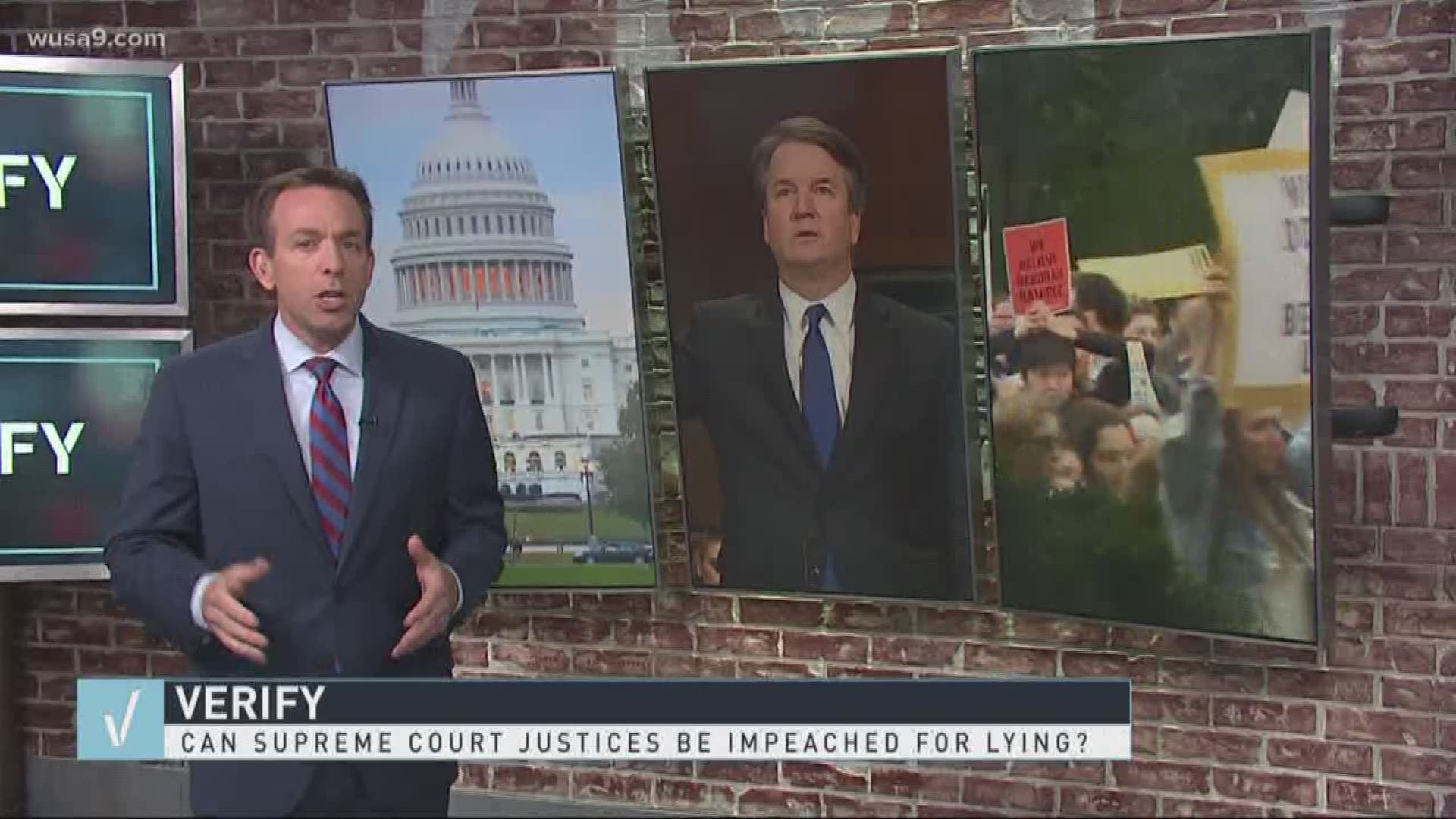 Can a Supreme Court Justice be impeached if the judge lied during confirmation hearings?

Yes, as long as a majority of the House votes for impeachment. Then the Senate needs to pass a conviction with a vote of 2/3 or 67 votes.

The Constitution- Article III Section 1 and Interpretation from the Legal Information Institute.

At 10:35 a.m. on October 5, the senate voted preliminarily on the appointment of Brett Kavanaugh to the most powerful seat in the judiciary.

With Saturday's final senate vote on the horizon, a Verify viewer asked our team whether Congress can impeach a Supreme Court Justice if it is proven that he/she lied during their confirmation hearing.

One former deputy assistant U.S. attorney general wrote a column in Slate in early September, calling for Kavanaugh's impeachment from the D.C. court of appeals, because of lying under oath.

Under U.S. Federal Code, if a person under oath knowingly and willfully falsifies or conceals information before from a Government official it is considered perjury, and you can be fined and/or imprisoned for up to 5 years.

Our Verify law experts say, perjury could be a reason for impeachment.

"It has never happened with a Supreme Court Justice, but it can," Susan Low Bloch, a Professor of Constitutional Law at Georgetown University, said.

Under the Constitution Article III Section 1 it reads: "The judges, both of the supreme and inferior courts, shall hold their offices during good behaviour..."

First the House of Representative needs a majority to issue articles of impeachment, then 2/3 of Senate or 67 votes are needed to remove the Justice.

"An impeachable offense is whatever a majority of the House of Representatives considers it to be. So a justice can be impeached for anything at any time," Amanda Frost, federal courts Law Professor at American University, said."If a Justice was proven to have perjured himself about a material fact during a confirmation hearing, then that offense would rise to the level of the type of misconduct for which (federal) judges have been impeached in the past."

"If he lied under oath, certainly. But the question is always political, as Gerald Ford said, the question is just what Congress believes is impeachable," Lawrence Lessig, a Professor at Harvard Law School, said.

The only Justice to be impeached was Associate Justice Samuel Chase in 1805, for refusing to dismiss biased jurors. The House of Representatives passed Articles of Impeachment against him; but he was acquitted by the Senate and served until he died on June 19, 1811.

So we can Verify, yes, a Supreme Court Justice can technically be impeached for lying during his or her confirmation hearing, but it's never been done.