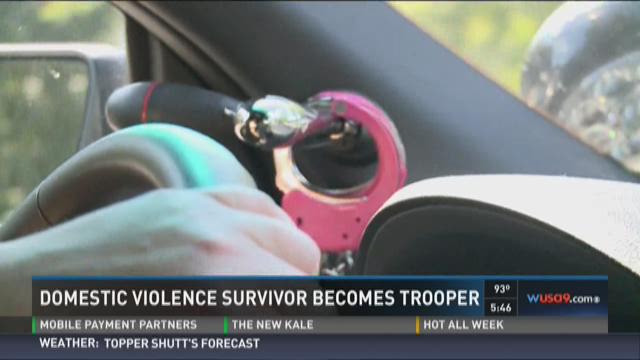 The first thing you notice when you look in the patrol vehicle of Maryland State Trooper First Class Kelly Seefeldt is the pink handcuffs hanging near the steering wheel.

"The only people who get the privilege of wearing them are suspects with more than five DUIs or anybody that's committed a domestic assault," Seefeldt said.

Seefeldt is a domestic violence abuse survivor who says a searing experience with police investigating her case made her vow to change the way victims are treated.

She was a 19-year-old college student when a boyfriend strangled her unconscious in the parking lot of a mini mart.

"I felt like the police officers treated me like a statistic and didnt really care about the situation," Seefeldt said. "I remember feeling completely victimized by the way they were treating me and I made a vow that I wanted to make sure that I could do something that could impact people positively where they would never feel the way I felt that day."

Seefeldt went on to become an Maryland State Trooper in 2008. She now patrols Cecil County Maryland and serves as the law enforcement liaison to the community.

She encourages domestic violence victims to muster the courage to get out of violent relationships.

Recalling one young woman she counseled, Seefeldt said: "I told her I've been in her exact position and its not going to get better. The promises he made you are not going to hold tight. Its only going to get worse. This time he broke your arm. What will it be next time? It only gets worse. It never gets better."

Seefeldt said she struggled to find the courage to break off with her abuser even after he was sentenced to six months in jail: "because I didn't want to be accused of giving up."

Instead, she has made a career out of working with victims and suspects to help them break the cycle of violence.

"I made a goal to myself at the beginning of this job that everyday I going to do something that impacts somebody's life in a positive way," Seefeldt said.

Shortly after making that statement, Seefeldt was called to take a young mother into custody on multiple drug warrants.

Rather than handcuffing the woman, she allowed her to see her 8-year -old son and give him a good-bye hug.

The handcuffs went on only after the child was out of view.