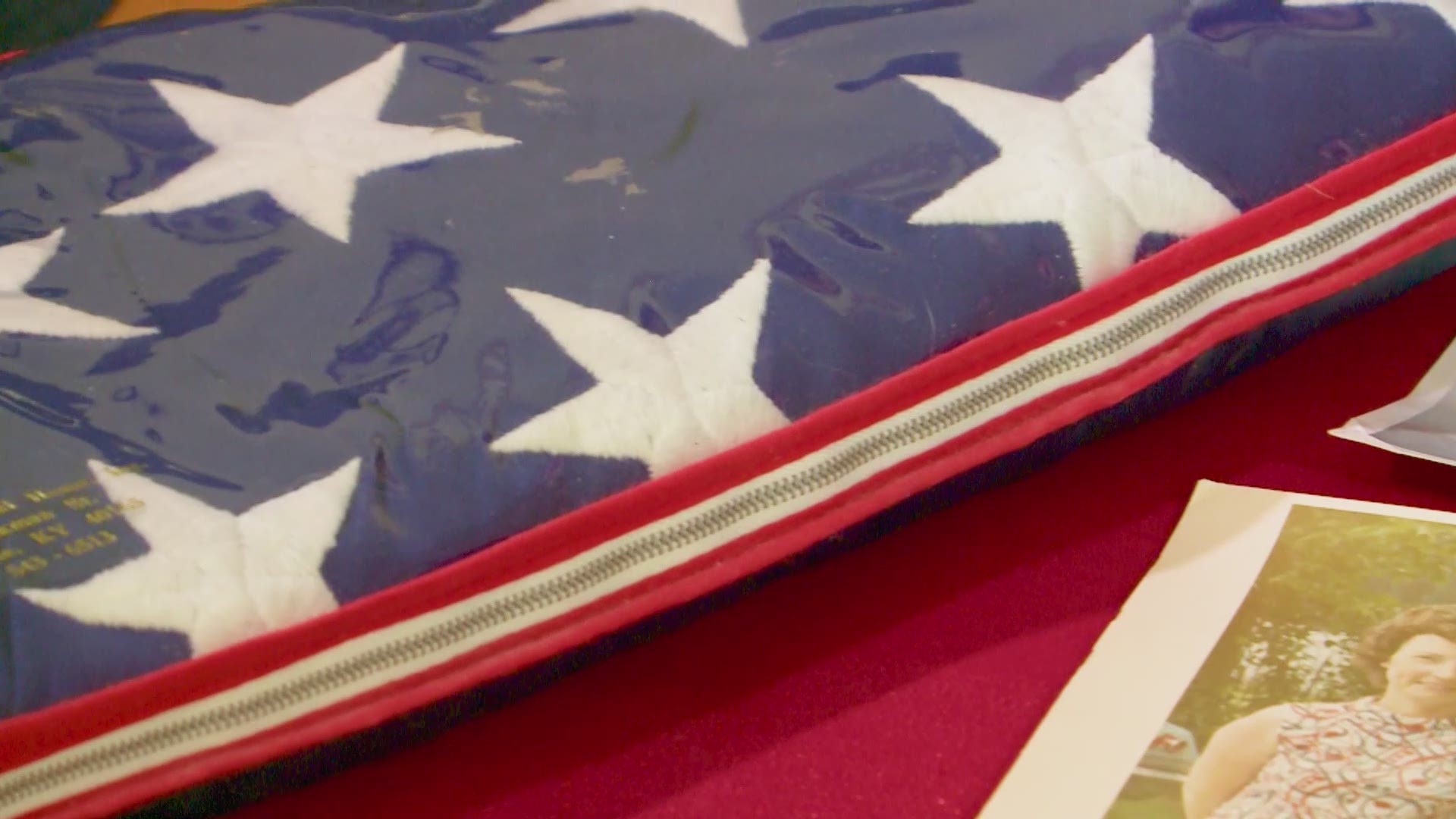 “I love my country. I’d do anything for it,"  Master Sergeant Donald R. Rice, U.S. Air Force, Retired said as he looked over a table full of memories.

He knows he has had the kind of career some people can only dream of.

From October 1960 to October 1980, Rice served our country as an illustrator.

He created drawings and slides that were shown to troops during briefings. Those illustrations would guide troops to their targets. It's a job that had to be more than precise -- it had to be perfect.

“They had to have the coordinates and be dead on,” said Rice. During his time at Turner Air Force Base in Albany, Georgia, Rice was assigned to Guam. That's where he helped guide B52 Bomber pilots to their targets.

Rice's career took him all over the country.  He had basic training at Lackland Air Force Base in Texas. He spent some time at Kincheloe Air Force Base in Upper Michigan before being assigned to Madrid, Spain. He came back to the U.S. to serve in Riverside, California. Then came an offer he couldn't refuse: a job overseeing a group of artists at the Joint Chiefs of Staff from June 1971 to August 1974.

While in Spain, Rice got the chance to be an extra in the movie "Patton." Pointing at the still of the movie, he's still as excited as he was the day he filmed.

"We weren’t going to skip that were we?" he said. "I thought you'd never ask!"

Rice says a friend got him the chance to audition, but he nearly got cut.

"Jim was six foot four inches and handsome as all get out. I was less than six foot and they let me know all about that when I got there," he remembered. Rice said it took half the night to convince a film producer to put him on the list.That's when Rice got to be in the background of a scene featuring George C. Scott.

"If I'd looked like Jim I would have been up front," he said. "Anyway, I'm in the movie!" he said happily.

Credit: wusa9
Rice points to himself as an extra in the movie "Patton"

Rice's recollection of his 20 years of military service is full of these kinds of contrasts.  Fun and sometimes funny moments juxtaposed with the reality of war.

"War is not pretty," he said. "No one should know about war, the less people know about it the happier I am, but it’s why you enjoy the freedoms you do today."

Freedoms many in Rice's family fought for.

Credit: wusa9
Donald R. Rice during his years in the U.S. Air Force

Rice has three cousins who served. One was wounded twice during three tours in Vietnam. Another cousin died in Saipan.

But it's his father's commitment to our country that sticks out in Rice's mind. Thomas Buford Rice served as a prop mechanic in the Philippines.

"I used to see his uniform hanging in the closet," Rice said.

It's not the thought of that uniform that's been eating away at Rice for the last 20 years. It's something that means much more to him; his father's flag.

"That flag was given to me when my father was in the funeral home. It carries a lot of emotion for me,” Rice said.

The flag has been carefully tucked away in in Rice's bedroom closet since 1997. Rice gets choked up when he talks about it. To him, it symbolizes so much more than his father's service to our country. It's a reminder to all of us, especially the younger generation, that so many before us made great sacrifices.

"I want to fly this one so when people say ‘I saw your flag. I saw your flag and it’s nice' I can tell them 'That's my father's flag,'"  he said with pride.

For Rice, the flag has a purpose that's going unfulfilled.

Cue the Gary Ray Brinson and the Virginia Patriot Guard Riders. You've probably heard of them. They're the group of motorcycle riders who escort families during military funerals. They're that group that stands between grieving families and lines of Westboro Baptist Church protesters hurling hate speech. They're the group of riders who stand for hours in the sleet, snow or blazing heat to honor our veterans and military families. So when they heard MSgt Donald R. Rice, U.S. Air Force, Retired had a mission to fly his father's flag, they took another stand.

“Patriot guard, we do a lot of funerals every year. Missions like this are a relief for all of us. We enjoy them a lot," Brinson said, as he and about a dozen other riders pulled up in front of Rice's house.

Rice watched the bikes roll by, knowing they were all there to honor his father's memory.

"I’ve known these guys existed and when they came up my driveway it was just more than I could deal with. These guys do this all the time," Rice said. "They take their time, money and efforts and they don’t let veterans like me be forgotten."

So after a lot of hand shaking, hugging and even a few Army/Air Force jokes, the crew got to work.

Brinson didn't just bring the Patriot Guard Riders in on this mission. He works for CACI.  The information technology company is made up of nearly 40% veterans, so he took this project to his boss.

“Our CEO found out about it and he’s the one that purchased everything.  He purchased a nice stone to put in front of the flag. We purchased the flagpole itself and we got some other things for you," Brinson told Rice.

Credit: WUSA9
This dedication stone was presented to Donald Rice on behalf of the Patriot Guard Riders and CACI. It sits at the base of the flagpole where he now has his father's flag.

For about two hours, the Patriot Guard Riders worked to put up Rice's new flagpole.  For this group of volunteers, dedicating a Saturday to helping a veteran isn't a chore.

"I’m a Vietnam veteran and this is an honor to do something like this. I have a flagpole in my own yard I put up 20 years ago," Patriot Guard Rider David Humphrey said. "It really means a lot to me to be able to fly the American flag."

As the Executive Director of Arlington National Cemetery, Karen Durham-Aguilera is reminded daily about the sacrifices our men and women in uniform make to our country. She continues to find new ways to honor them through her work as a Patriot Guard Rider.

“Master Sergeant Rice [who] served in the Air Force, then retired which meant he gave most of his adult life on behalf of this nation," she said. "So for us, it’s a real honor to come out here and then help him honor our nation by erecting a flagpole so we can proudly fly the America flag in his yard."

PORTRAITS OF THE PATRIOT GUARD RIDERS: 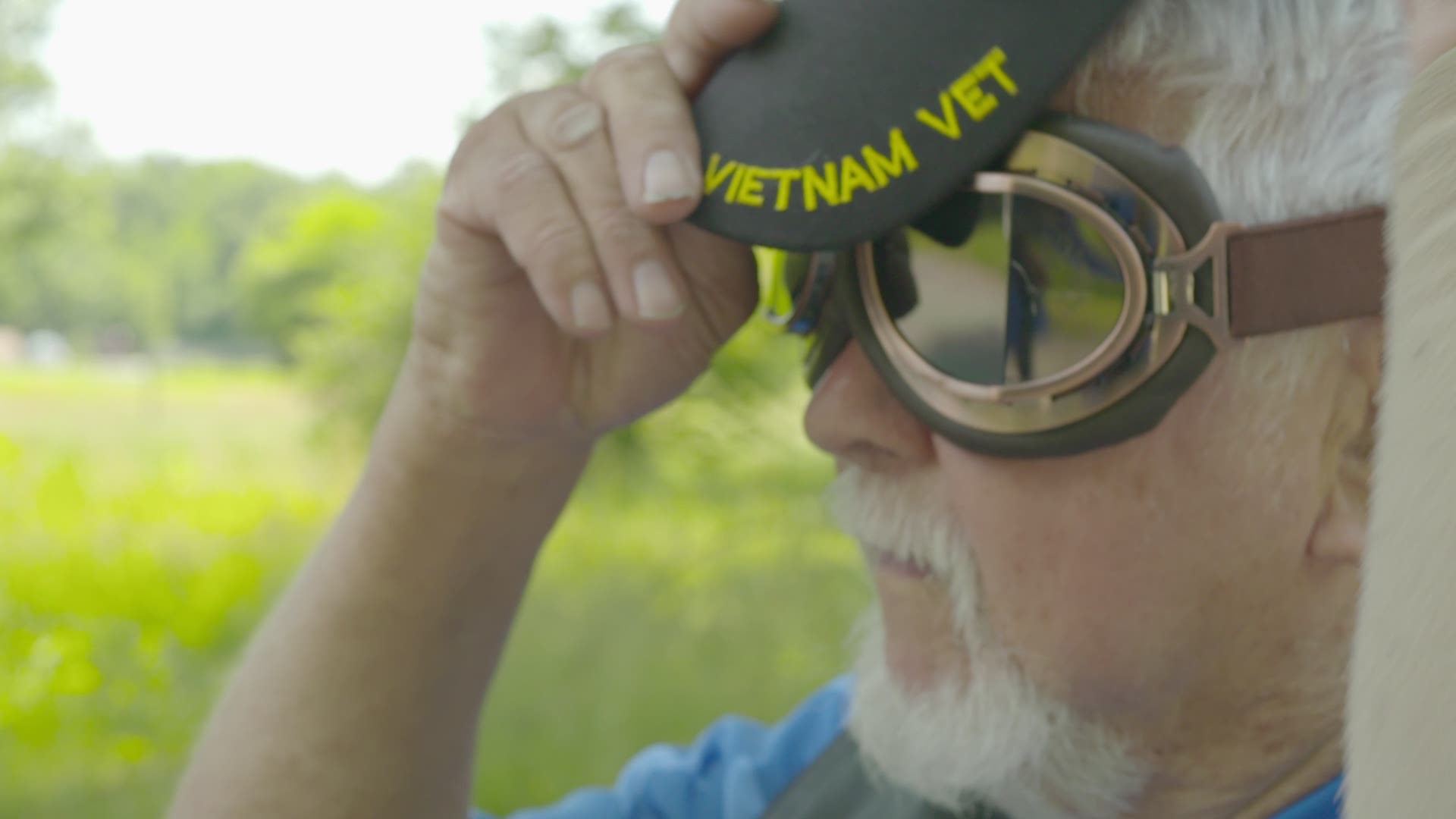 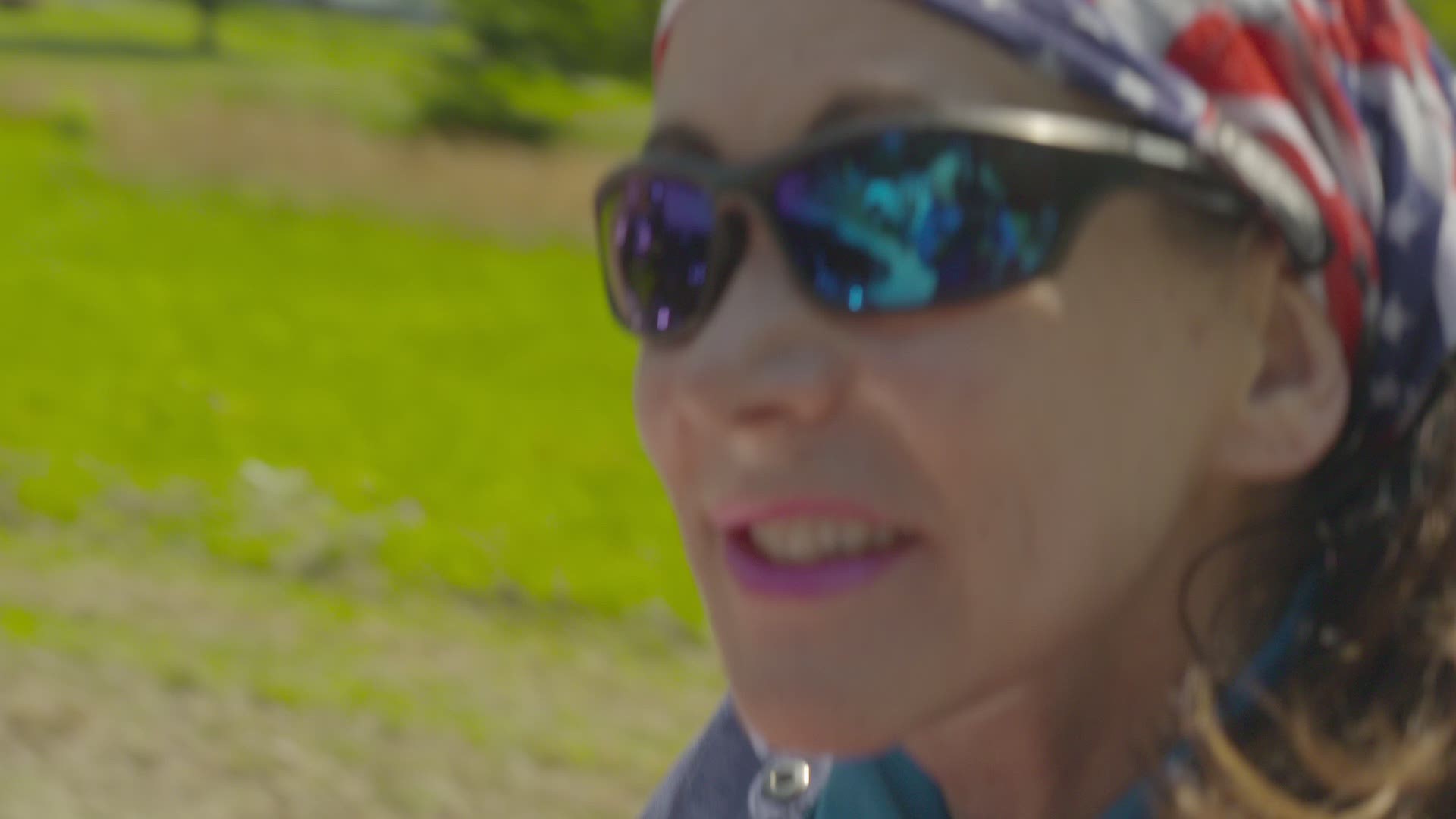 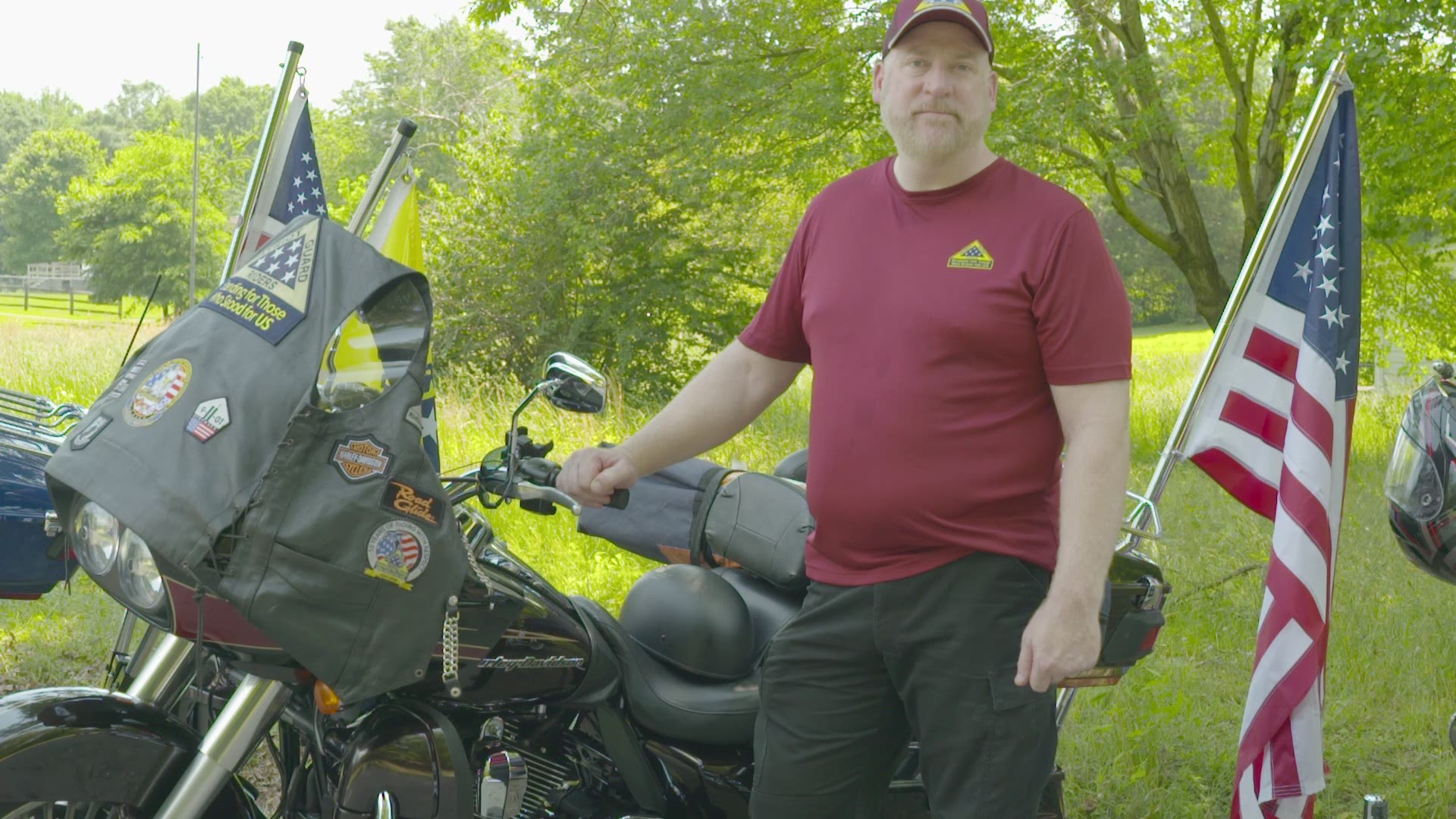 After a few hours of hard work, Rice got the chance to finally fly his father's flag.  Brinson signaled a salute, then the flag went up.

"I was overwhelmed with emotion. That was my dad’s flag going up that pole and all of these veterans help me put it up there. It doesn’t get any better than that," Rice said.  “I will never forget it. Never forget it.”