'The Thumpyard' brings fighters together to end gun violence 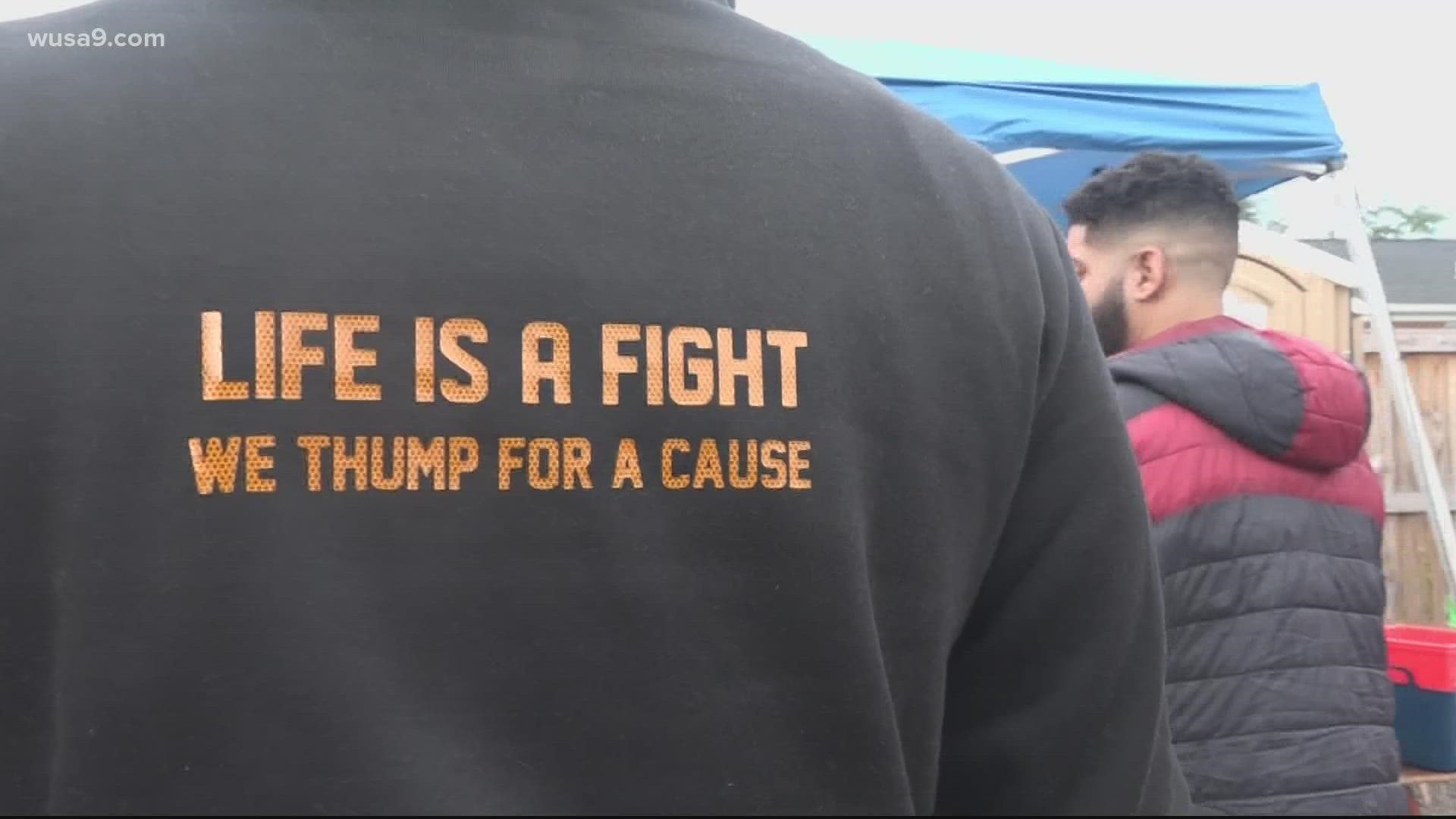 ADELPHI, Md. — It was after dark when Jonathan De La Cruz entered a homemade backyard fighting ring behind the tall fences of a landscape contractor's yard in Adelphi, Maryland on a chilly Sunday, October night.

Despite the darkness, a raucous crowd of about 75 spectators and fighters was still gathered in the yard off of an unpaved alley off Riggs Road. A DJ kept throbbing beats going into the night.

It was to be the final showdown after a full card of 11 other sometimes-savage amateur fights that had been staged that afternoon. Now, car headlights lit the makeshift ring and the rowdy crowd held up cell phone cameras to provide more light for the final match.

De La Cruz bumped gloves with his opponent Troy Addison Jr. Only now did the gravity of the moment strike some in the crowd. Unlike all the other fighters that afternoon, both of these men were in wheelchairs.

Both are survivors of shootings. Both are part of a new home-grown movement called "The Thumpyard."

The movement's motto is "Guns Down, Gloves Up" and "Thump for a Cause".

The 11th Thumpyard event ended that night with De La Cruz and Addison embracing in exhaustion after pummelling each other for a full three, 3-minute rounds. They had been maneuvered in their chairs by supporters who shouted coaching as the fighters on wheels battled.

"It takes heart and courage and a lot of perseverance to be in this ring,” De La Cruz said while linking arms with Addison after the fight.

"At the end of the day, we’re all here for one cause which is to put the guns down and the gloves up.”

Only then did the crowd drift away and the music stop.

De La Cruz and his brother Rigo founded "The Thumpyard" in the spring of 2021.

The brothers say from the beginning the Thumpyard was not intended to be just another backyard fight club, which has become a popular genre on social media.

Instead, they explained that the idea was to create an uplifting brotherhood and sisterhood of fighters and supporters who inspire each other to turn their backs on the street violence plaguing the communities many of them come from.

Clad in boxing gloves and protective headgear, men and women of all ages and abilities fight with their fists and courage rather than guns.

Some wear jeans in the ring instead of boxing trunks.

In return they earn the credibility and respect from their peers that so many young people from difficult circumstances crave, De La Cruz explained.

"I know we've prevented shootings. I'm sure of it," he said.

"You come here to fight once and everybody knows you," Gordon said. "You come here one time and win or lose, they want you to come back and try again. There's never hate. There’s kindness and a whole lot of love for real.”

But in the ring, the fights are no-less ferocious. The message has caught fire. Thumpyard events are promoted on Instagram and YouTube.

Fighters come from neighborhoods throughout the Washington regions like nearby Langley Park, which has been plagued by gang violence.

Others who have heard about the Thumpyard drive in from as far as Brooklyn, NY and Philadelphia.

Anyone can sign up and fight through the Thumpyard's website, regardless of experience. Paid security officers pat down participants and spectators to ensure there are no weapons other than fists.

A moon bounce is provided for kids and vendors operate out of food trucks.

Some spectators bring beer and even champagne.

Documentary filmmakers who discovered the Thumpyard are preparing to release a new film in theaters before the end of the year.

In the weeks before the fights in Adelphi, De La Cruz met WUSA9 at his home in Bowie.

"I would describe the Thumpyard as a gun violence awareness campaign that we do through boxing," De La Cruz said after working out on specialized equipment to allow him to lift weights and throw punches as a paraplegic.

“I was a victim of gun violence in 2009. So that's been my biggest inspiration. And I was also a boxer as well. My father was a professional boxer, and I grew up in the sport. This was a way to get back involved in the sport and do with a message.”

De La Cruz is a real estate investor who was paralyzed from the chest down in a home invasion shooting in Montgomery County. No suspect was ever charged.

He says he was attacked by an intruder who interrupted him while he was studying for a real estate exam. De La Cruz believes it was an attempted robbery. He looked through a photo album featuring him dressed for a boxing match before the shooting.

"It takes me back to a different life,” De La Cruz said. “I'm coming up now on my 13th anniversary and I feel like I’m 13 years old. After that injury date, it was a totally new life for me."

De La Cruz recalled profound emotional struggles in the wake of being paralyzed by a bullet that splintered in his body.

But he threw his energy into real estate brokering and investing. Along with his brother and mother, the family has built a successful company based in Bowie.

The idea for Thumpyard developed as De La Cruz became a fan of other backyard fight channels on YouTube and Instagram. But he was also deeply concerned with the sharp rise in gun violence in the D.C. region.

"I told my brother, we can do this. But let's do it for a reason and give it a mission," De La Cruz said.

The brothers staged their first Thumpyard event in April of 2021. Through social media, it immediately caught fire. All events feature De La Cruz sharing parts of his personal story. A guest speaker is always invited. Many, like Addison who fought De La Cruz in October, share inspirational accounts of how gun violence has touched their lives.

De La Cruz also offers to mentor those who might want to start a small business or a career. Thumpyard fighters frequently meet to train at the O'Connor boxing gym in Hyattsville on Tuesday and Thursday nights.

Between rounds of sparing, stretching, lifting weights and pounding bags, the group of fighters has become a close-knit tribe of young men and women who frequently come from difficult circumstances, and whose lives have often been touched by gun violence.

One fighter is 29-year-old Christian Vargas, a construction worker from Wheaton also known as “Scrappy”, joined after a friend was murdered in February.

Martin Nolan was shot near Vargas' home in January. Vargas says he feared it was an ambush meant for him. He admits to being laid low by both a deep depression and thoughts of revenge.

“My close friend, he got shot and it took me to a dark place," Vargas said. "Before the Thumpyard I was not thinking straight. When I heard about the Thumpyard, I saw it on Instagram and I knew I had to go. Boxing changed my life and turned it around.”

Vargas had zero experience. But said he was immediately embraced by fellow fighters and supporters when he showed up for his first match.

Since then, "Scrappy" has become a featured fighter at Thumpyard events which have included intense rematches between him and previous opponents.

At more than 185 lbs, Vargas has won his last three fights.

Another fighter, Carlos Ortiz, said he recently completed a 10-year federal prison sentence for a drug distribution conspiracy. Ortiz says he was no stranger to gun violence in his past. He adds that he was attracted to Thumpyard at first sight.

“Stop the violence, stop the gun violence," Ortiz shouted while covered in sweat at the O'Conner gym on a recent Tuesday night. "You got a beef? Thumpyard! Put the gloves on. You don’t got to take nobody's life to make you no winner," Ortiz said.

"You can put on the gloves and you can put down the guns," he went on. "And if you have issues or you want to resolve something with someone, take it in the ring, and that's it."

"Afterwards you can respect each other," De La Cruz added. "That don't mean you have to be cool with each other, but at least you can give each other the respect that each person deserves.”

The message has resonated with supporters like Prince George's County Council Member Deni Taveras, who represents Adelphi and Langley Park.

Taveras says she is hoping to assist De La Cruz and his brother in finding a facility to set up their own boxing gym to continue to inspire neighborhood youth to turn their backs on street violence.

De La Cruz wants the movement to spread to as many communities as possible.

"This has gotten so big so fast," he said. "We can't stop. Thumpyard is my mission now."