YouTube took down the couple's YouTube channels, but the family appears to be operating a "fan" channel and uploading videos to the "Team DO5 Fans" YouTube channel. 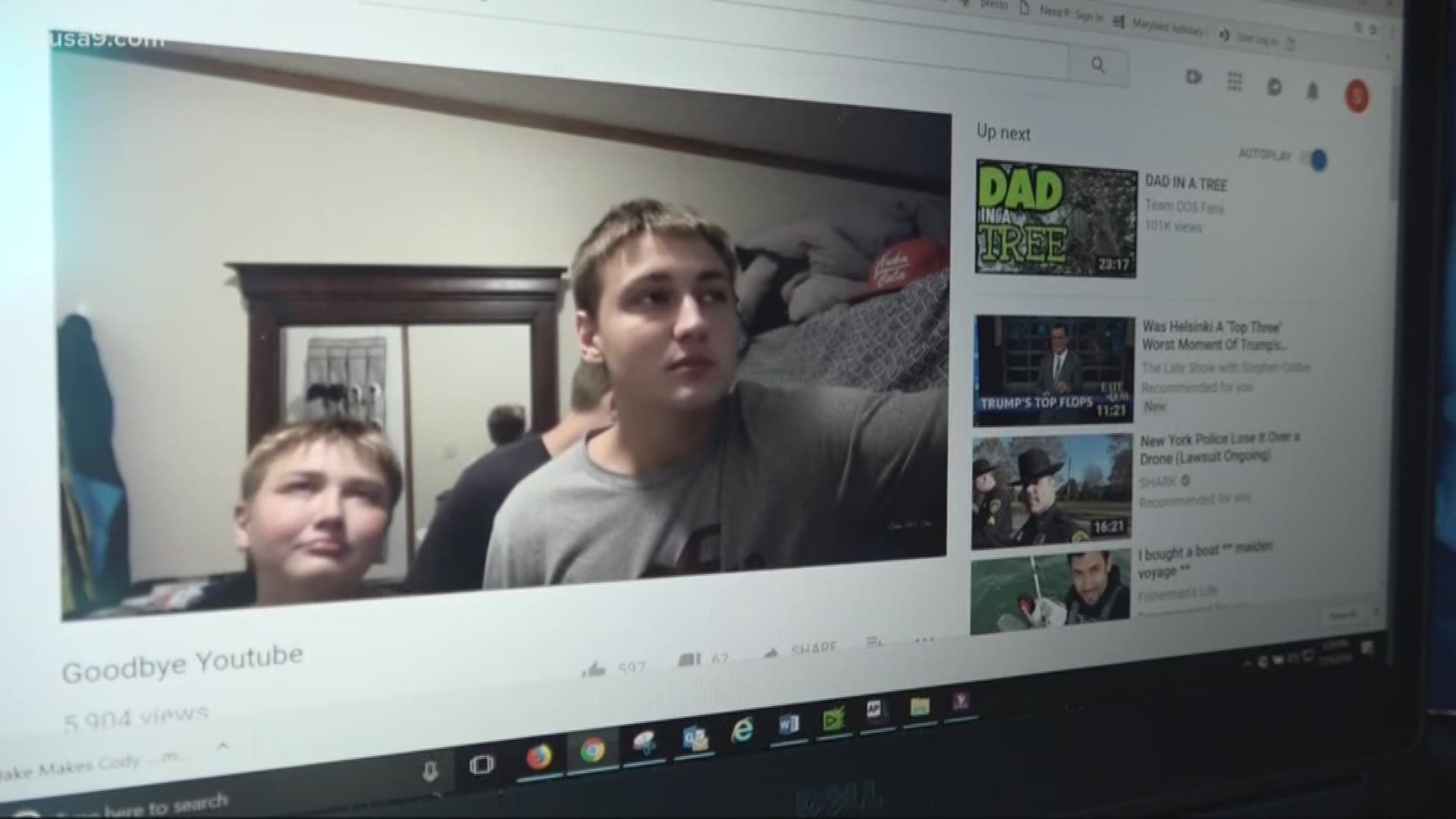 FREDERICK, MD -- A video depicting the bullying and emotional abuse of a boy by family members remained posted on a YouTube channel on Thursday, despite actions taken by Google to stop hosting the content of convicted child neglectors Michael and Heather Martin.

The couple are serving probation for child neglect in Maryland and lost custody of two of their five children after a judge viewed their YouTube videos showing apparent physical and emotional abuse by family members.

Despite the conviction, the family continued to produce and post videos, sparking widespread outrage.

YouTube took down the couple's channels FamilyOFive and FamilyOFive Gaming on Tuesday citing "this channel owner’s previous strikes for violating our Guidelines prohibiting child endangerment, we’re removing all of his channels under our Terms of Service.”

But at least one video depicting the emotional torture of a young boy called "Jake Makes Cody Psycho" remained posted on Thursday afternoon on a "fan" channel called Team DO5 Fans, which also appears to be operated by the family.

"It's our family's YouTube channel," said one boy in a video posted on Team DO5 Fans on Thursday.

In the video entitled Goodbye YouTube, the remaining children in the custody of Michael and Heather Martin tearfully said content showing pranks as well as adults and children shouting at each other is "not real."

"It's for entertainment purposes only," said one of the children in the video.

Meanwhile, mom Heather Martin took to Twitter to send out a copy of a written statement saying the family will appeal the ban of its channels by YouTube.

This is the only statement I have made about YouTube deleting our channel, anything else is false information. pic.twitter.com/zGDyVMd2F1

Martin said the videos they upload are "entertaining skits" and much of the content "is staged".

“We have been in constant contact with YouTube over the past year about its channel and its content. We have several emails and correspondences from YouTube saying we had “Family Friendly Content” and that we were not violating any of their terms and conditions," Martin wrote. “We have started the appeals process and it is our hope, and our children’s hope, that YouTube will do some further digging into our current content and reconsider their decision.” 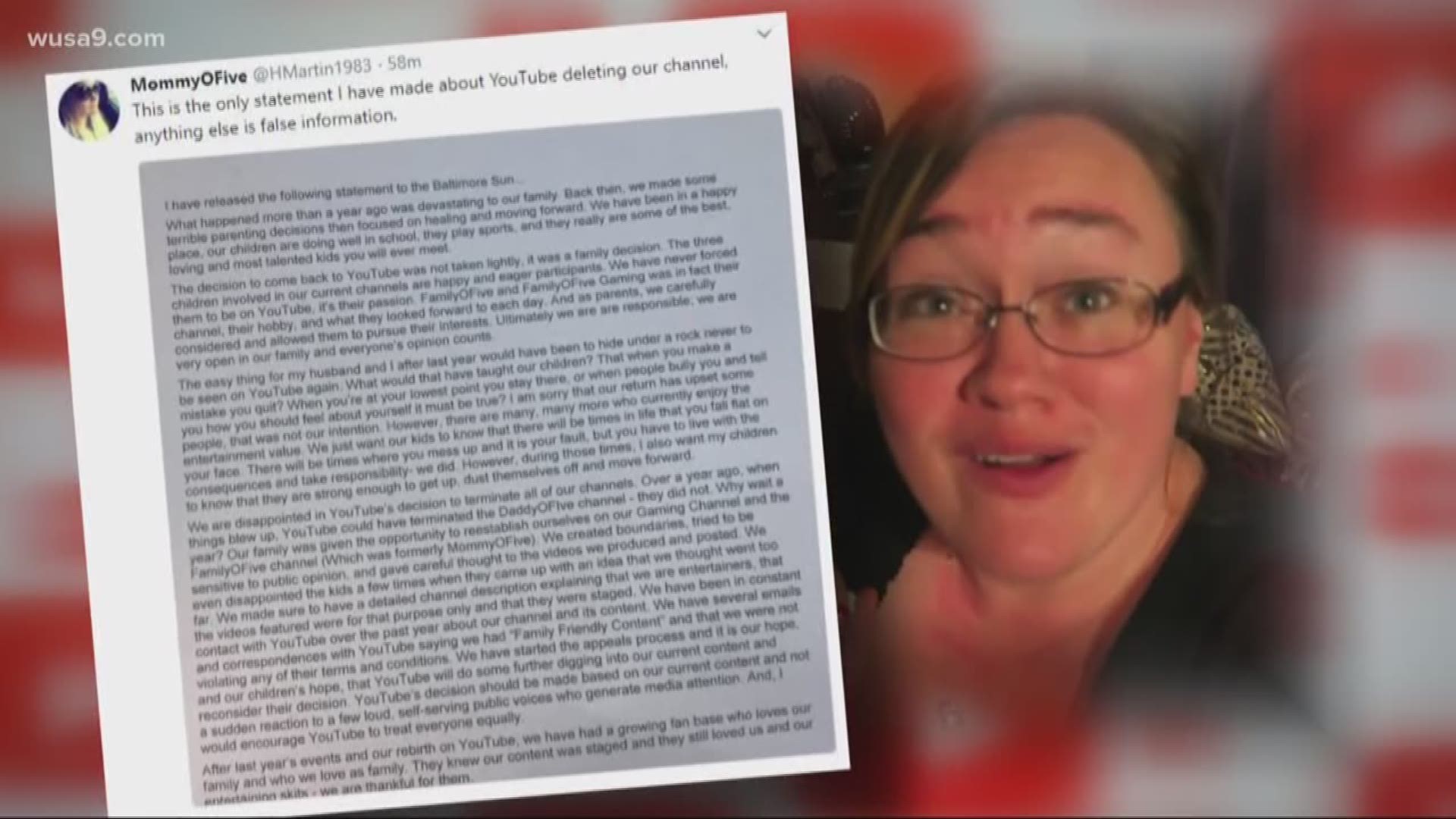 The mother of the two youngest children who were removed from the family's home in 2017 said she is happy YouTube took action against the Martins channels, but she added the video platform is responsible for letting them continue to post content after their conviction.

"If they're going to have a platform up and let people make videos, they should monitor them better or review them better or hire more people to do the job better," said Rose Hill in a conversation monitored by her attorney Tim Conlan.

Hill has custody of the two younger children featured in videos depicting family abuse. She said they are doing "OK" now, but still suffer some bullying and she fears for their mental health in the future.

Conlon said with the posting of additional video to a channel apparently associated with the Martin family YouTube continues to fail.

"I cannot imagine how they let it go on," Conlon said.

Conlon confirmed the video that remained posted on Thursday entitled "Jake Makes Cody Psycho", was evidence of the neglect and custody cases against the Martins.

Before the suspension of FamilyOFive and FamilyOFive Gaming on Wednesday, the family had more than 400,000 subscribers.

Google has not responded to WUSA9's specific questions regarding why the banned channels continued to operated despite the parents being on probation.