Solaris: A Shelter for the Next Cold War is a commentary on today's war on a consumer's identity. It's open now at the D.C. Culturehouse. 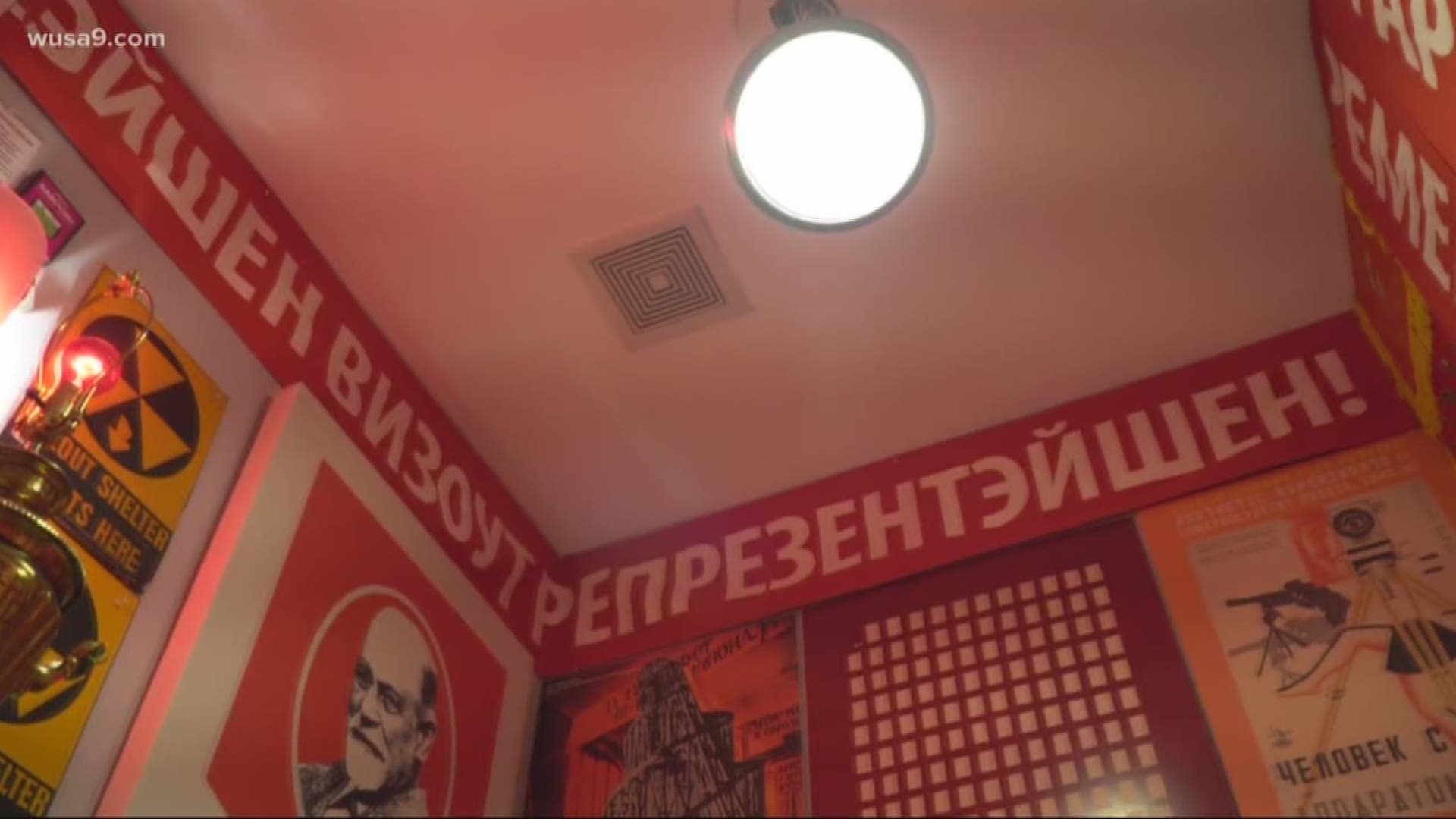 WASHINGTON -- Step into the DC Culturehouse, and you'll see signs that may look familiar, but there's a twist.

The Macy's logo is transformed into 'Marx's.'

D.C. artist Mark Kelner is using these skewed symbols to reflect on what he calls today's crisis.

It's not a nuclear war but an assault of ideas that he and his curator, Zachary Paul Levine, say threatens our identity.

“Solaris: Shelter for the Next Cold War came from an idea that my curator, Zachary Paul Levine had when I invited him to my…studio bathroom,” said Mark Kelner.

"I went in there and noticed that he had filled every surface with some type of ephemera that defined his past, that defined his identity...and I said, 'Mark what you’ve created here is some kind of safe room for yourself," said Zachary Paul Levine.

It was born in Kelner's family history.

“My parents left the Soviet Union before I was born," said Kelner. "My mom came over eight months pregnant to the united states, and I was born shortly thereafter.”

His parents sought shelter from the Cold War.

He and Levine said decades later, they, too, need a safe haven.

“This idea of a safe room came about in the very early months of 2017 when it felt like Washington was going a little bit crazy with the inauguration, and we were all screaming into the void in Facebook and twitter and so on, and the one thing that it felt like everybody wanted was some release, some relief," said Levine. "This is a shelter for right now when we’re worried about overload from a million messages coming at us from our phones, from television, from everywhere else.”

Being in Washington, many of those messages are political.

“I’m looking at the Mueller Report…not so much for what it doesn’t say or does say. I see black squares or rectangles…and I can make the intersection between the Russian avant-garde and contemporary American politics," said Kelner.

“At the heart of this project, that the only way we can deal with life in DC today is through satire," said Levine.

Levine said their goal is to make an impact on people.

“Get them to think a little bit differently and to come out of this experience changed," he said.

The music you can hear throughout the exhibit was created specifically for this project by a DC composer named Kondotronics.

You can check out this exhibit at the DC Culturehouse until July 9.

Solaris: A Shelter for the Next Cold War

1 / 7
Eric Jansen
Solaris: A Shelter for the Next Cold War offers a commentary on pop culture through US-Russia relations