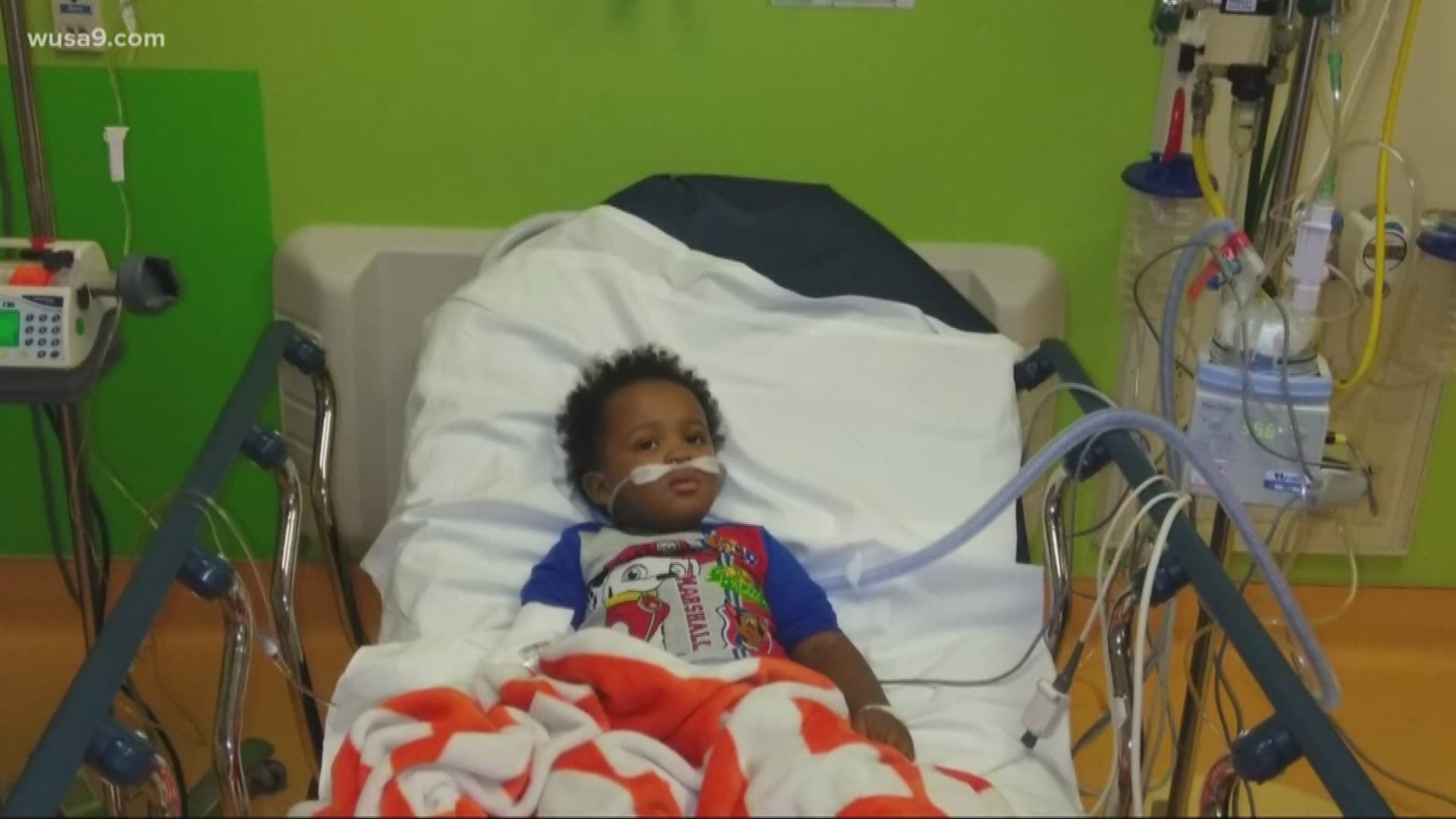 WASHINGTON — Sitting on her living room couch in Northwest, Carmen Montgomery recalls the terrifying moment in 2017 when she found her 1-year-old son struggling to breathe.

"Every time he took a breath, a deep breath, his whole chest was caving in and he was making a noise like was gasping for air," she said.

Montgomery called 911 and her son King was rushed to the hospital.

"At the hospital they put him on the ventilator," she said. "He had to get IVs, he had tubes running up his nose – it was devastating."

According to medical records the family shared with WUSA9, doctors said King’s severe asthma was triggered by moldy conditions in his Southeast home. The D.C. Department of Energy and the Environment checked out the basement apartment and listed dozens of violations in its Healthy Homes Environmental Hazard Assessment. The landlord was slammed with thousands of dollars in fines and ordered to fix the problems, including the plumbing issues.

Moldy conditions inside the Montgomerys' home

Montgomery and her children finally got out of the house thanks to Sharra Greer, the policy director at the Children’s Law Center, and her team. The lawyers sued the landlord to finally get Montgomery's family into a safe and healthy home.

Their old house on 28th Street Southeast is now condemned.

"There are a lot of families in the city living in conditions that qualify as squalor because there is no other place they can afford to live," Greer said. "The kinds of choices they’re being forced to make are horrific. We’re talking ceiling collapsing, sewage coming into the apartments, rodent infestation where kids can’t even sleep in bed at night without having rats crawl on them."

Most of these families aren’t squatting in abandoned homes. They're living in legitimate housing in D.C. Montgomery’s place in the 1500 block of 28th Street Southeast looks like a flip – complete with new vinyl siding.

"These are people who are paying rent, or they have rental vouchers," Greer said. "They should be in an inspected, safe place to live but the landlord is not maintaining the apartment so they fall into this horrible disrepair. This is a problem the city should be very well aware of."

In fact, according to a recent auditor’s report, the city knew about this unlicensed boarding house on Kennedy Street Northwest. The illegal apartment went up in flames back in August. Two Ethiopian immigrants were killed: Forty-year old Fitsum Kebede and 9-year-old Yafete Solomon.

The auditor found seven crucial missteps that led to the tragedy. The report indicates that despite a police officer’s 22 emails warning of the house’s unsafe conditions – including bad wiring and locked doors and gates – the D.C. Department of Consumer and Regulatory Affairs (DCRA) failed to follow up.

The report said inspectors even closed the case two days before that deadly fire. Four housing employees and two firefighters are now on leave, and a criminal case is in the works.

"We’re actually at a point where we don’t even call DCRA anymore because it’s pointless to have them come out because there are more effective ways in taking the landlord to court," Greer said.

One unrelated, but high-profile, court case involved Sanford Capital. WUSA9 tried to chase down the landlords back in 2016 after some of their tenants contacted us about unsafe living conditions in their Congress Heights apartments. The attorney general ended up suing the company for racking up more than 100 violations in its 14 apartment complexes across the city. Sanford Capital paid out hundreds-of-thousands-of-dollars, and not only lost this apartment building, but the attorney general kicked them out of the city.

Sanford Capital is banned from owning any properties in D.C. for the next six years.  Thursday, the Attorney General finally settled the lawsuit.  Sanford Capital will pay $1.1 Million in back rent to 155 tenants who lived in the unsafe and unsanitary apartments in three properties in Ward 5, 7 and 8.

“The Office of the Attorney General fought Sanford Capital’s shocking abuses for years alongside tenants and their advocates,” said AG Racine. “I am pleased that this settlement will provide long-overdue monetary relief to vulnerable residents who were forced to endure inhumane living conditions. Today’s settlement sends a message to slumlords that business practices that put profit ahead of the safety and well being of their tenants will not be tolerated in the District.”

But Sanford Capitol is an exception. Many landlords operate under different LLCs for each property, and their names are rarely attached.

"Oftentimes who actually owns the property can be difficult to track down under current law" Greer said.

Last December, the D.C. City Council passed the DCRA Omnibus Amendment Act of 2018 which would have cracked down on slumlords and these LLC’s, but that bill was never funded. So, Greer said until city agencies get their act together, the Children’s Law Center will fight to get families out of dangerous living conditions.

"You shouldn’t need an attorney to have a clean and safe apartment," Greer said.

The tragedy is that the lawyers were never able to step in and save nine-year-old Yafet when the city failed to keep him safe. But today, Montgomery’s family is in a clean, healthy home.

"If it weren’t for them, I wouldn’t be here," Montgomery said.

And while now three-year old King is still on asthma medication, he's thriving and can breathe again.